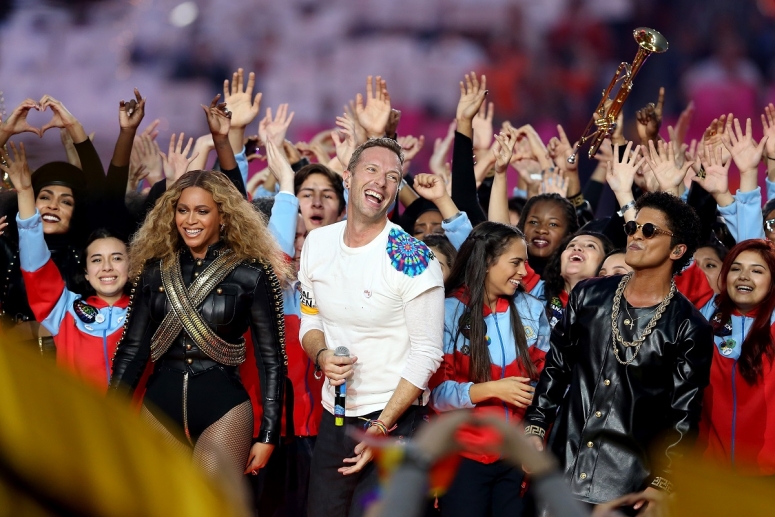 Let’s get this out of the way: The Super Bowl 50 Halftime Show is the greatest 13 minutes in human history. Okay, maybe second to the moon landing—that was pretty impressive. This show was the second-greatest 13 minutes in human history. I’m one hundred percent serious. An unequivocal triumph of choreography, aesthetic, production value, unabashed sentimentality, and hope, it fried whatever part of my brain is in charge of finding beauty and meaning in the world. That’s right. It’s the heroin of beauty and meaning. So get off your high horse, New York Times; if you thought Beyoncé, Bruno Mars, and Chris Martin singing “Fix You” and “Up&Up” over a montage of the greatest Halftime Show acts of the last 50 years was just more of Coldplay “fill[ing] huge spaces with blank, occasionally amiable rumble,” you really died years ago.

We at The Harvard Crimson Arts (with the exception of Music Exec Amy J. Cohn ‘18) love Coldplay, but we happily concede that the show’s first five minutes are its weakest. Sure, Chris Martin euphorically leaping around a stadium exploding in intricate color patterns is a breath of fresh air in our bleak postmodern experience, and sure, “Viva la Vida,” “Paradise,” and “Adventure of a Lifetime” are perfectly suited to this venue. But something is missing, even if we can’t quite put our finger on it.

With the first bass note of “Uptown Funk,” we realize that something was the boldness and sheer showmanship that define the best and most memorable halftime shows. With “Uptown Funk”—quite possibly the song of the decade—it becomes clear that this is not going to be just a Super Bowl Halftime Show. It is going to be the Super Bowl 50 Halftime Retrospective, a 13 minute sampling of the best America has to offer.

And then, in a burst of fireworks, behind marching-band drummers—oh my God, Beyoncé. “Okay, ladies, now let’s get in formation,” she announces to the country. After finishing the first verse, she stares down the camera with a grin that says, “I’m about to make you forget every piece of entertainment you’ve ever seen before this moment.” (She was right. To even review the first half of the show, we had to find it on YouTube, which is harder than it sounds.) Talk about “boldness and sheer showmanship.” Singing lyrics like “I like my negro nose with Jackson Five nostrils”? Dancing like that, on grass, in heels? People call her “queen” for a reason.

Upon finishing her all-too-short segment, Beyoncé gets in a musical theater-style showdown with Bruno Mars. Like the Sharks and Jets sequence from West Side Story, each camera cut builds excitement, and each dance move is cooler than the last. When they invite Martin back, the 112 million watching at home remember that Coldplay was once involved in this show. But even if Twitter thinks he looks a bit awkward between Mars and Beyoncé, “Uptown Funk” is the perfect way to unite the disparate elements—a universal musical celebration.

But why stop at uniting just three Super Bowl acts in joyous nostalgia? Coldplay’s beautifully wimpy “Clocks” and “Fix You” then serve as sonic complements to clips of iconic moments from Super Bowl Halftimes of yore. Yes, it’s oversentimental—unless we realize that the Super Bowl is our true national holiday. Unimposed by governments, accessible to the nonreligious and religious alike, it is the only time each year that the entire country unites for one event—an increasingly rare and valuable thing in the splintering world of news feed algorithms and Netflix. And, fittingly, the great Super Bowl Halftime Shows are ones that bring us together. Even a hardened cynic, if he’s honest with himself, finds a little bit of relief from the world’s existential loneliness when Bruce Springsteen hollers, “Is there anybody alive out there?” Who doesn’t feel a little familiar comfort in Paul McCartney’s still-earnest crowd banter? Who doesn’t tear up at the classic back-to-back silhouette of Bruce and the late Clarence Clemons as Martin sings “Tears stream down your face when you lose something you cannot replace?” Michael Jackson grabbing his crotch, the Stones’ tongue-shaped stage, Bono backed by the post-9/11 American flag—these images are indelibly burned into our cultural retina. The Halftime Show is how we have all experienced our cultural heritage together for generations.

So when Martin, Mars, and the Queen sing, arms around each other, “We’re gonna get it, get it together and flower, woah,” the lyric sounds not like bombast but like genuine hope—hope that the fractures that still plague the West will heal with the salve of the music, humanity, and love we share. And perhaps to remind us that that’s possible, the camera zooms out to reveal tens of thousands of fans holding up colored cards to display a message: “Believe in love,” over a rainbow background. Maybe it was the gayest halftime show ever. It was certainly one of the best.