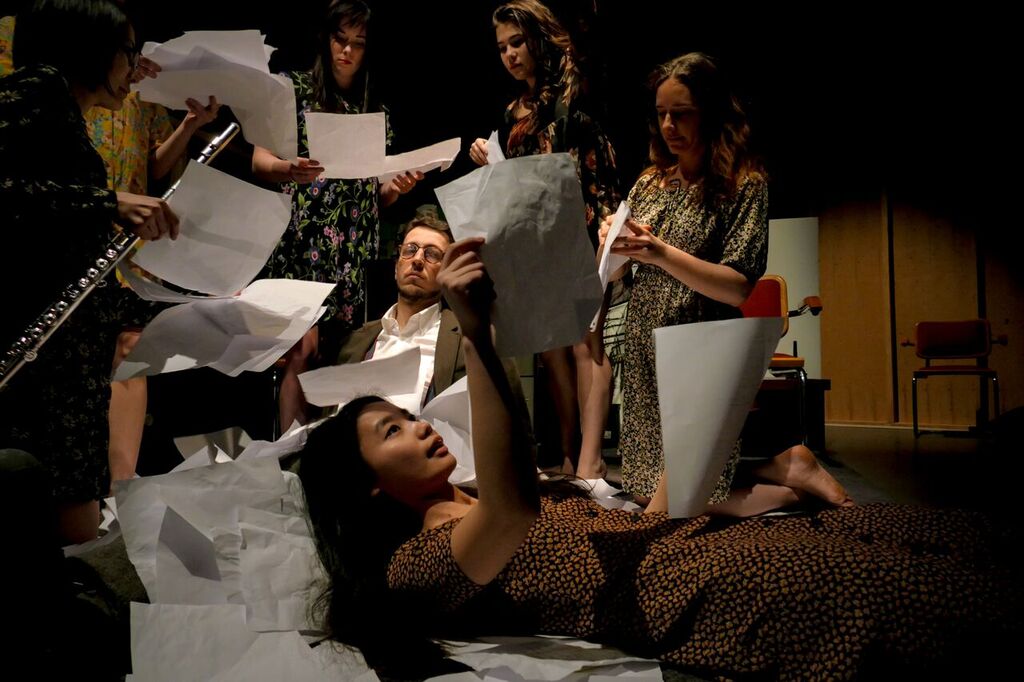 As an opera, “Switch” accomplishes a vast amount of its goals with extraordinary creativity and delicacy. But it has one glaring flaw: its plot. John Aylward may be a fantastic composer, but his new opera, “Switch,” is a reminder of why the libretto and the score are usually the work of different individuals. There’s only so much creative energy one person can muster. The unstable story of “Switch” would have been enough to damn many plays, but "Switch" is redeemed almost wholesale by its marvelous execution.

The opera, running Feb. 12 to 20 at Cambridge’s Le Laboratoire, focuses on the trials and travails of Henry (Mikhail Smigelski), an aspiring playwright who simply cannot complete his latest project until a mysterious woman named Anne (Amanda DeBoer Bartlett), purportedly a friend of his girlfriend Molly, begins to revitalize his work as a muse. As the play progresses, Henry’s relationship with Anne—and Anne’s to the world at large—become increasingly murky. These developments all take place in what the program aptly calls “an alcohol-induced dreamscape.” Though the use of familiar tropes is not, in and of itself, a fault, writers have been writing about how they can’t write for centuries now, and it’s hard to come up with the thousandth variation on a theme that by now feels slightly trite. The plot’s broad themes, too, seem tenuous: The theme of myth, for instance, feels a bit shoehorned in, as though the librettist read a couple Joseph Campbell books a couple nights before finalizing the libretto. The plot is generally weak, starting off with a character we don’t particularly like writing a story that doesn’t get that much better despite repeated bursts of “inspiration,” guided along by advice that either seems obvious or useless.

The scenes are brilliantly realized, with a number of fantastic feats of creative staging. In one scene, Anne seems to climb onto and over Henry, emptying bottle after bottle of whisky onto him; in another, as Henry describes his screenplay to Molly, virginal girls in floral dresses ethereally drift across the set to the fridge only to grab a bottle of Narragansett Lager; in yet another, those same girls, heavily implied to be Anne’s fellow muses, bury a delirious Henry in veritable reams of rough drafts. The individual scenes of the play are immensely evocative and imaginative, with something interesting happening in almost every corner of the set at any given time. “Switch” may have a shaky plot, but it is articulated with extreme finesse.

The set of “Switch” is stunning. Scenic designer Andrea Merkx makes clever use of the Le Laboratoire’s black-box space, creating six distinct islands of visual interest. Two of those areas are occupied by the musical ensemble: In one the percussionist stands surrounded by a dizzying array of instruments, and the conductor, flautist, cellist, and clarinet player, arranged in a loose diamond, occupy the other. The other four spaces are beautifully rendered representations of rooms in Henry’s house. These portions of the set have a warm, modern feel and feature a beautiful selection of bauhaus artifacts, from a wonderfully boxy white coffeemaker to a walnut rolltop desk. The set is immensely detailed, abounding with clever touches—oranges, for example, are dotted around the area as decorative flourish. There’s also, in keeping with the show’s themes, a bottle of booze in every drawer.

Musically, as well, the opera succeeds. The instrumentalists are all tremendously gifted. Flautist Keiko Murakami skillfully played four different varieties of flute, ranging from the piccolo to the alto, and percussionist Mike Truesdell was able to make use of his entire arsenal of marimbas, drums, cymbals, and whole host of other instruments. The musical numbers themselves were innovative and gorgeous, making use of a staggering variety of different sounds—from percussive raps on the cello to low breathy gasps on the alto flute. There are a number of excellent arias in the opera: “Love, Death, Honor, and Truth,” “The Magnets of Euripides,” and “The Ring” are three highlights out of many. The arias do suffer from a bit of fragmentation; Henry and Anne’s singing is sometimes distractingly broken up by dialogue. But this flaw does not detract from the otherwise very proficient score.

Director Laine Rettmer wonderfully fuses music and theater, incorporating each of the musical performers into the action of the stage. Murakami danced and moved with the muses and was heavily implied to be one of them—since with her they numbered nine. And at one point cellist Serafim Smigelskiy (not to be confused with actor Mikhail Smigelski) appears on Henry’s desk, playing his cello as the coquettish Anne languidly wraps herself around him, fingering the notes. Their collaboration grows in tension until Anne, driven to a state of frenzy, pulls the tuning pegs out of his cello and, lifting the instrument above her head, runs offstage, pursued by the worried cellist. After a pause, a loud, wooden crash is heard. The incorporation of the musicians into the drama serves as a fascinating blurring of the fourth wall.

The opera’s acting is, on the whole, mixed. DeBoer Bartlett delivers a tremendous performance, portraying the beleaguered Molly and the maniacally energetic Anne with equal poise. Her body movement is expressive, her singing exceptional, and overall level of energy exceedingly high. Mikhail Smigelski is a phenomenal singer, with a robust, melodious bass-baritone with serious power. However, the opera’s lack of long, uninterrupted arias prevents his singing voice from shining as powerfully and distinctively as it might. His character comes off as stiff, unable to fully deliver the intense ecstasy and frustration to which Henry is supposedly subjected to throughout the course of the play. This criticism is not to serve as a censure of Smigelski; both his thick, hard-to-ignore accent and a certain woodenness inherent in the script contributed to this impression. Smigelski moves well—one of his most arresting scenes shows him putting a beer bottle down with such vehemence that he shatters it, lacerating his hand.

Unfortunately, the intentionality of Henry’s woodenness is unclear. It would certainly mesh with the themes of alienation and failure of expression that suffuse the work. And Henry’s character does possess hints of cluelessness and lack of tact: There is a fantastic scene towards the end of the opera in which he, ignorant of the source of Molly’s distress, can only mention his progress on the project that is so clearly asphyxiating their relationship. If Henry’s flat affect is intentional, it is well done—but it may have been done too strongly, rendering his character unengaging.

In many ways, “Switch” is a masterpiece: It gets almost all the details right, from creative and intricate staging to fantastic blocking to lovely musical nuance. However, overall the opera comes off slightly underwhelming, its small but frequent flares of genius unable to elevate stale themes and wooden characters. The whole turns out to be less than the sum of its parts. But for its various excellent individual components, “Switch" is absolutely worth a look.

—Staff writer Adriano O. Iqbal can be reached at adriano.iqbal@thecrimson.com.