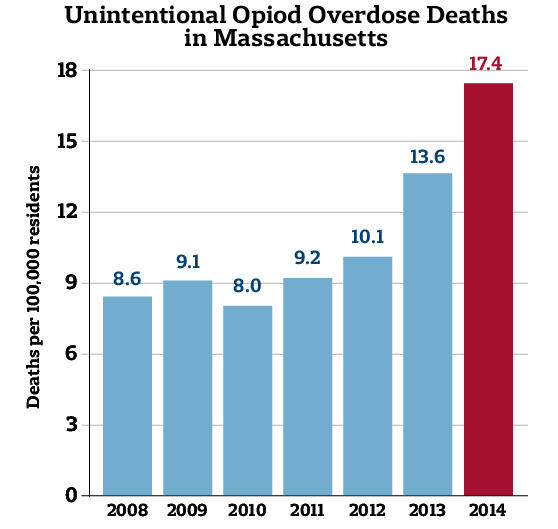 With increasing rates of fatal heroin and opioid-related overdoses in Cambridge, City Councillors are discussing policies that may help alleviate the growing epidemic, including expanding funding for treatments and supporting statewide legislation.

Cambridge has seen an increase in the number of opioid overdoses in the past three years, according to a Massachusetts Department of Public Health study. A Cambridge Public Health Department study revealed that fatal opioid-related overdoses rates for the city were 7.3 cases per 100,000 people, which is lower than the state average of 10.7 cases.

State-wide information also points to an increasing trend in Massachusetts. According to a recent report from the Massachusetts Department of Public Health, heroin overdose rates have skyrocketed since 2000, climbing from 338 deaths to 1,173 deaths in 2014, a 247 percent increase. Data from the National Institute of Drug Abuse show similar national trends.

The magnitude of the issue has made it difficult for Cambridge City Councillors to prevent heroin overdoses at a municipal level.

“It's a regional and national and international issue if you’re talking about stopping the drug trade,” said City Councillor Jan Devereux. “It’s got both physical and psychological roots.”

The City Council has passed resolutions focused on prevention and treatment, held a roundtable meeting, and supported state legislation in recent months. One resolution passed in August emphasizes the gravity of the epidemic and the Council’s reaction to Cambridge's heroin crisis.

“This is [the] biggest public health epidemic that our state and region is faced with right now,” the August resolution reads. “Our city is not immune to this epidemic; and given the risks for public safety, our City must address this issue aggressively.”

Devereux said prevention and treatments can include programs in education and substance abuse clinics. However, Cambridge and other neighboring areas are in significant need of more funding, she said.

“Obviously it’s a really multi-pronged approach,” Devereux said. “We don’t have enough treatment beds in Cambridge, Boston and the state. Unless we're ready to fund more of that—because it’s expensive and it’s uninsured.”

Other methods of combating the epidemic are beyond municipal control. The Council passed a resolution on February 1 supporting two bills currently progressing through the Massachusetts state legislature that would allow local police to administer Narcan, a drug that helps treat individuals who have overdosed.

“Cambridge Police, who are often first on the scene of overdose situations, have expressed an interest in carrying Narcan, but have concerns regarding legal civil liability associated with administering the drug,” the resolution reads.

Ultimately, the issue is one that must start with prevention, Devereux said.

“Having Narcan available is so important because it can save lives but it doesn’t solve the problem,” she said.