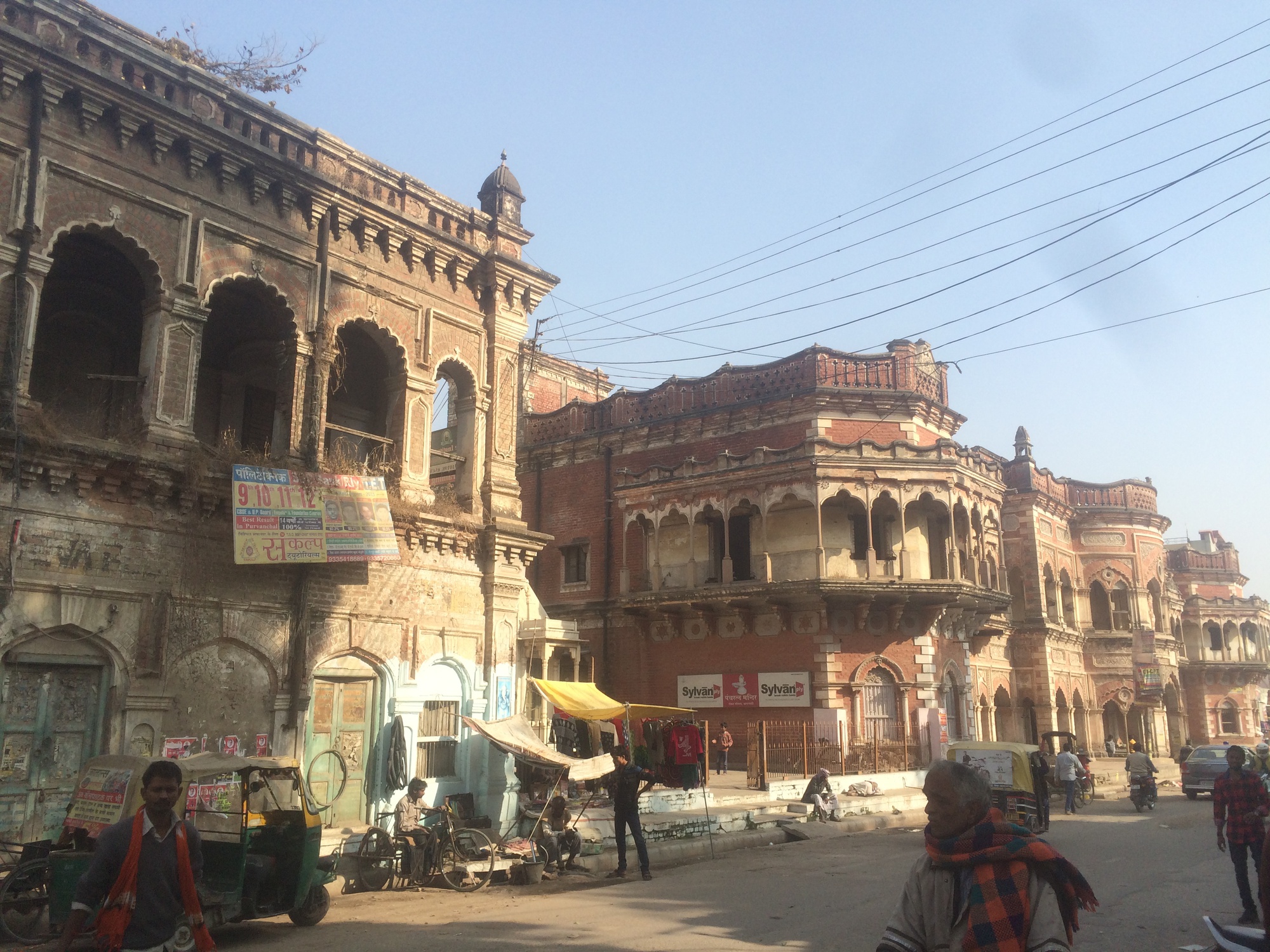 Traveling to India for the first time, I wanted to shed the heroic-journey paradigm.
By Kiara F. Z. Barrow

I was told on the first day of a writing workshop that only two narrative structures exist in the entire history of plot: 1) a hero goes on a journey, and 2) a stranger comes to town. As useful as this maxim is in plotting the beats of a screenplay, the question of perspective puzzles me in parsing the tangled strands of my own journeys. A real-life wanderer lives any story as its hero—when we travel, we do things. Things happen to us. It’s difficult to escape this self-centered narrative, or view oneself as a stranger, particularly when trying to really see a place. It’s even more difficult to escape later on, in the telling of that place.

Traveling to India for the first time, on a loosely defined fellowship with little-to-no preconceived narrative structure (despite its funding by the English department), I wanted to shed the heroic-journey paradigm, to impartially absorb a new and entirely different place. But certain stories and images of India had been provided for me as a 23-year-old American woman. Would it be “Eat, Pray, Love” or “A Passage to India?” I pictured the Beatles: shaggy-haired, unshaven, posing with a sitar, or the even more fully bearded Allen Ginsberg transcribing visions in his Indian Journals. Then, there’s “Slumdog Millionaire.”

Practically as soon as I cleared my Dubai layover and landed in Kolkata, the Facebook messages started arriving: “OMG how is India? Can’t wait to hear everything!” and I began to think of my experiences in terms of how I would tell them. I became aware of how difficult this would be on the first day, wandering through my neighborhood. The stray dogs and decapitated chickens bleeding into the street didn’t seem part of the same story as the terrifying chaos of traffic, or the mysterious rhythms of the university my travel partner and I were visiting. Nothing paused to cohere into a story we could tell: It just was. We were strangers come to town, but there was nothing remarkable about that.

Stories to write home aside, constructing narratives about the trip for ourselves was a difficult project. Most signifiers had been robbed of their expected meanings—water was danger; our iPhones functioned only as malaria pill alarm clocks. The atmosphere was subsumed by smog into a kind of hazy non-weather, detached, in the mild Bengali winter, from ideas of hot or cold. The usual criteria for evaluating situations did not apply—I had lost the ability to measure safety, feasibility, or even distance (and the ability to Google it), and operated largely on best guesses, vague guidebook advice, and the hospitality of Kolkatans who were always happy to give directions to two lost American girls. Often, crowds would form in the street to collaborate on the project of calling us an Uber, or arguing over the best route to the restaurant we were looking for. In a class at the university—Postcolonial Literature—I was surprised to find my own continent the subject of study. Everything was flipped; the distant and exotic Americas, ravaged by European imperialism. Places I had never felt close to—the waters of the Caribbean and ancestral Inca stomping grounds—suddenly felt like part of my own history.

At a Kolkata literary festival one weekend, held at the colonial-stamped locations of the Oxford Bookstore and the Victoria Memorial, we found keys to the collective narratives we needed to tap into—a little less “hero’s journey,” a little more “stranger comes to town.” Certain stories came up at every panel we attended, whether about book publishing and book covers, Southeast Asian writing, or the literature of trauma, the bloody 1971 partition of Pakistan and Bangladesh. On another weekend trip to Varanasi, the holy city, we puzzled over religious inscriptions on temples.

Sitting in a professor’s apartment over takeout Chinese and rum with flat, syrupy Coke, we told each other stories. Sometimes we stumbled, conversations stalled by the insurmountable obstacle of scale. Our hosts reached the end of a long answer to one of many questions only to sigh, visibly grappling with the counter examples. What role did caste play in contemporary India? Though everyone in the room claimed that it wasn’t relevant, they could read each other’s castes in their last names. Several students teased their Brahmin friend and he described half-heartedly participating in his family’s coming-of-age ritual, wearing a string around his neck and spending a solitary day or two in prayer. His younger brother had bought a cow with his coming-of-age money. Elsewhere, caste really did dictate everything from profession, to income level, to marriage, to place of residence. Embedded in a liberal, privileged university community, our companions couldn’t represent India to us. Likewise, we couldn’t represent America. We don’t like Donald Trump, we insisted.

In Darjeeling, we encountered tourists of all kinds: fashionable Nepali teenage girls who wanted a photo with us, American backpackers flocking to WiFi in an alarmingly Brooklyn-style café, Indians from around the northeast. We wanted to hear about local culture—the Tibetan influence, the tourism industry, the continued existence of colonial-era continental restaurants and resorts—but our Buddhist homestay host turned instead to theories about the connection between ISIS and Angela Merkel as we huddled around his space heater.

“The government created ISIS, and now they won’t take in any refugees,” he explained. “It’s all there online, but the media isn’t reporting it.”

He offered us black tea, wondering if, as American coffee-drinkers, it might be unfamiliar. When we demurred because of the late hour, he insisted that the idea that tea contained caffeine was a myth, and also warned us against the ubiquitous chai we consumed by the miniature, ceramic cupful. Milky, full of sugar and cardamom, this seemingly national drink of India, he claimed, was in fact a chemical byproduct posing as tea.

Towards the end of the trip, exhausted and fed up with processing the raw information of our experience, we turned back to familiar narratives of India. We hijacked university Internet, surreptitiously torrenting Wes Anderson movies with palpable shame. It wasn’t just that we missed American culture; we wanted to see American narratives of India, specifically to be told how to think about the place we were in. We watched “The Darjeeling Limited,” “Bend It Like Beckham,” and, abandoning all pretense of decency, “Slumdog Millionaire.” I felt dirty, voyeuristic. It was as grotesque to me as it had seemed the first time I saw it in theaters, profiting on poverty and violence, spinning a happy ending with a Bollywood-esque dance number. But, although I recognized some of its imagery after three weeks in India, I had no better read on how realistic its depictions were, or how reasonable or acceptable a story it made. Of course, the movie doesn’t describe what India is like—as a quintessential hero’s journey, “Slumdog Millionaire” is about what happens to Jamal. Perhaps frustratingly, but still necessarily, my stories from India are about what happened to me there, and nothing else. In both seeking and resisting narrative, my stories of the trip have probably morphed by now into a mix of inherited images, retrospectively romanticized adventures, and a jumble of sensations and strange details. Several weeks out, the photos and the souvenirs have already taken on meanings they never really had: things chosen randomly and opportunistically, and now forced to contain the entirety of the trip. When asked how my trip to India was, I’ve settled on the non-answer, “intense.”