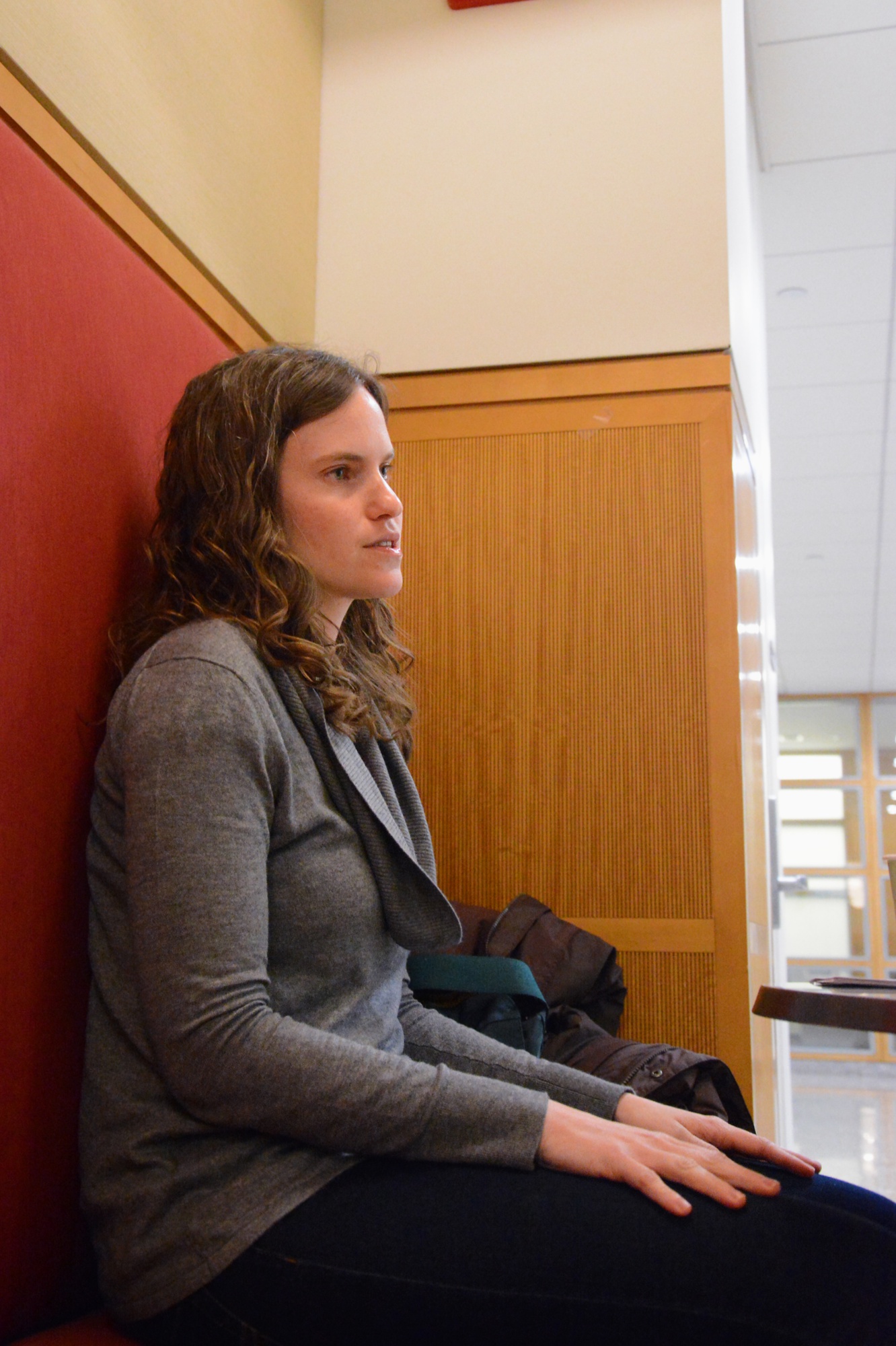 Erin M. Hutchinson, an active member of the Harvard Graduate Student Union-United Auto Workers, is a teaching fellow for a course with subject matter that differs from her research focus.
By Leah S. Yared, Crimson Staff Writer

“A little bit of all of that thrown together” is how Ph.D. student Erin M. Hutchinson describes her day-to-day life as a third year doctoral candidate in the History department, and as a teaching fellow in the College. 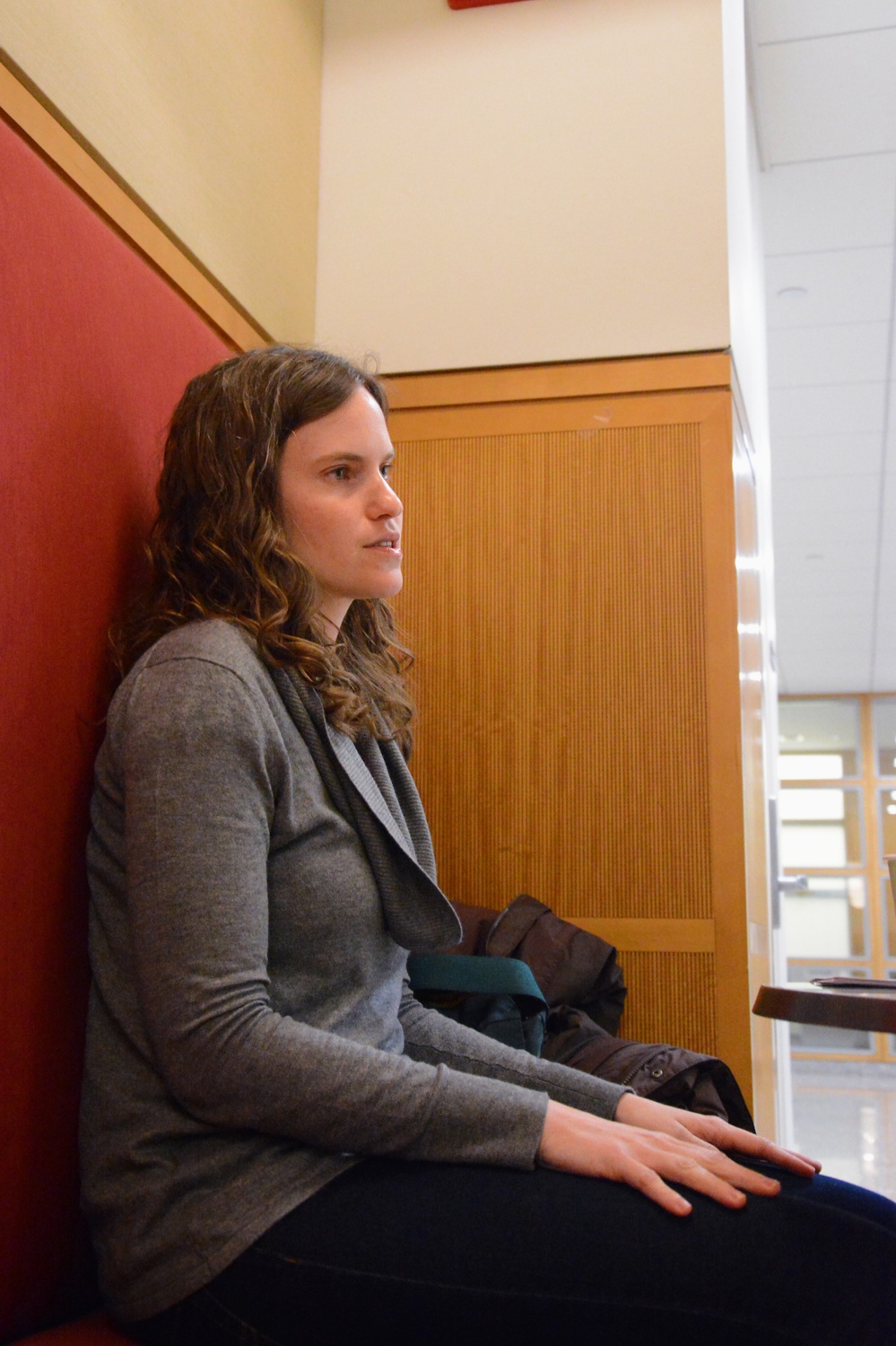 Erin M. Hutchinson, an active member of the Harvard Graduate Student Union-United Auto Workers, is a teaching fellow for a course with subject matter that differs from her research focus. By Helen Y. Wu

About three miles away, Ph.D. student Avery A. Davis works as a research assistant in a lab at Harvard Medical School. She is a fourth year in Biological and Biomedical Sciences and she studies copy number variation, a form of variation in the genome.

Though their studies are quite distinct, Hutchinson and Davis are both active members of the Harvard Graduate Student Union-United Auto Workers, a unionization effort that recently announced it had garnered a majority support among graduates that Harvard employs. The effort, made public last spring, aims to bring Harvard and graduate students employed by the University—including teaching fellows and research assistants—into a collective bargaining arrangement so that graduate students can negotiate on benefits and working conditions.

Harvard administrators have repeatedly warned against the prospect of graduate student unionization, arguing such a move would shift the focus of the University’s relationship with its graduate students from academics to labor. Earlier this month, Harvard jointly submitted an amicus brief to the National Labor Relations Board, calling for the body to continue to define the relationship between private universities and graduate students as strictly academic. 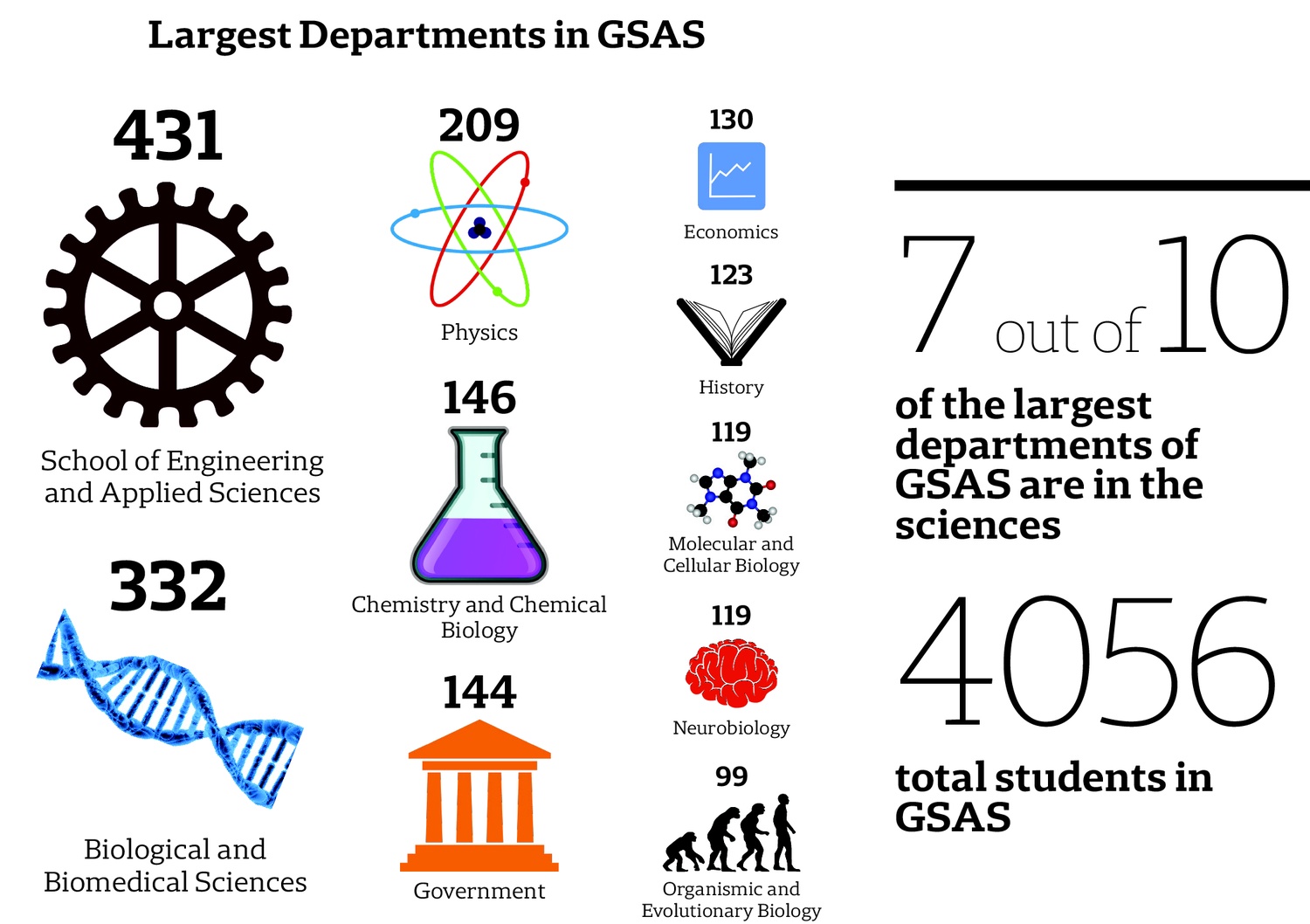 But graduate students from across the University maintain they should be classified as workers and gain the right to negotiate with Harvard. These students come from a variety of diverse academic backgrounds, but even students from schools as different as the Graduate School of Arts and Sciences and the Medical School share many of the same concerns, ranging from health benefits and financial stability to teaching position availability.

Many students have said that the union movement, HGSU-UAW, has brought together graduate students from across Harvard and allowed them to understand the issues impacting students in departments other than their own.

For example, among many graduate students, health insurance is often a major sticking point. Tuition can often cover GSAS students’ health insurance, but some say they would like to see more benefits.

GSAS students do not need to pay a copay for visits within University Health Services, but there is a $35 copay for outside visits. And no Harvard graduate school includes full dental coverage in their health benefits package, a fact that remains concerning to some people.

“I’ve got tons of cavities now. My teeth are in the worst condition they’ve been in for my whole life,” union supporter Byron M. Davies, a Ph.D. student in the Philosophy Department, said. “I imagine a lot of it has to do with the fact that I have to pay so much out of pocket for dental care.”

GSAS administrators have begun talking about the possibility of offering a dental plan, although fully covered dental insurance is not common at many graduate schools, according to GSAS Dean for Student Affairs Garth O. McCavana.

“That’s something we’re taking a hard look at,” GSAS Dean for Administration and Finance Allen Aloise said. “We’re exploring the option, we’re pricing out, collecting data on what sort of options are out there and what the prices would be.”

HGSU-UAW hopes to call for more subsidized housing to graduate students across Harvard, especially given student concern about the rising cost of living in and around Cambridge.

Union supporter Leigh G. Senderowicz, a doctoral candidate at the School of Public Health, had to move to Jamaica Plain, a distant location, and says she still feels financially strained. 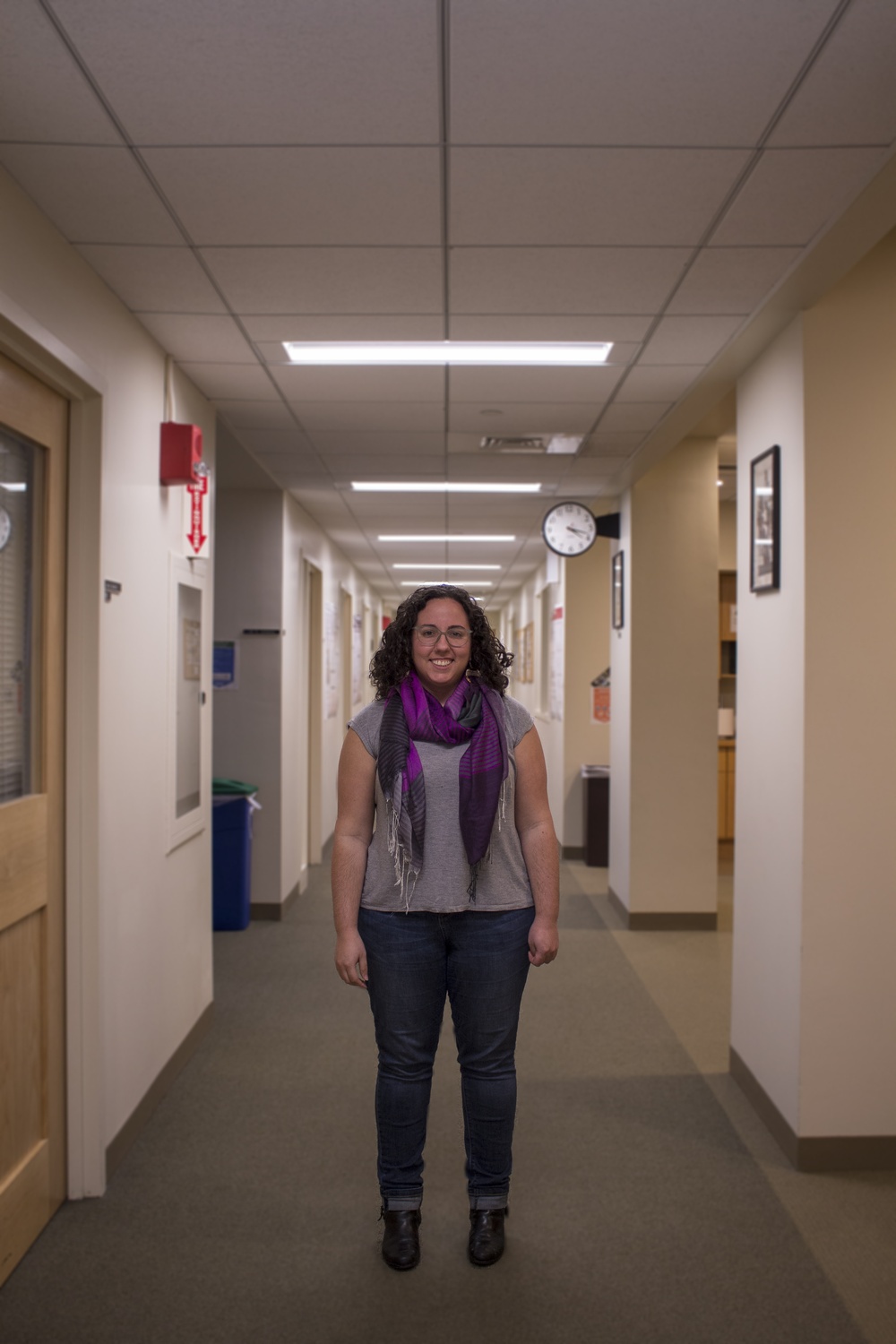 Leigh G. Senderowicz, a Doctor of Science (S.D.) student at the School of Public Health, is a teaching assistant and a full time student, also often working at external consultancies. By Helen Y. Wu

“I live at the very last stop of the orange line. It’s not like I’m trying to live somewhere super downtown,” Senderowicz said. “I’m living as far away as I could possibly live and still be connected via the T.”

Many graduate students also face difficulty trying to fulfill paid teaching positions. For graduate students in the social sciences and humanities entering their third year, during which students are typically guaranteed to teach, the semester often starts with a scramble for such positions.

Hutchinson was first assigned to teach a sophomore History tutorial, but later learned the professor would not return to campus.Ultimately, she was assigned to a course that normally would not have had a teaching fellow.

Because of Harvard’s unique course registration process, teaching fellows often do not find out what course they will teach until a few weeks into the semester, because enrollment numbers for classes are not determined until after study card submission.

“The thing that’s a little frustrating is that I didn’t really know until really after study card day if I was officially assigned to that class, or if I was going to have to scramble and find another teaching position,” Hutchinson said.

Union supporter Ronni G. Sadovsky, a J.D. and Ph.D. student studying in the Philosophy department, said that teaching positions for third and fourth year students do not always pan out. As a third year several years ago, Sadovsky said she was told there were not enough teaching assignments to satisfy demand.

“I sent out CVs all over the place. I interviewed for this Jewish literature course even though I haven’t taken a literature course since I was in high school. I tried to teach modern Hebrew just because I speak it,” Sadovsky said.

Harvard’s shopping period does not only lead to delayed assignment for teaching fellows; it also creates problems with payroll. Aloise said the issue often occurs both because of the chaos of shopping week and also graduate students transitioning into their teaching years and switching between two different University payroll systems.

“The way Harvard manages its preregistration, or lack thereof, is one of the complicating factors around this,” Aloise said. “There is not a defined number of sections associated with every course being offered, therefore it is not possible to assign the correct number of graduate students to sections and laboratories well in advance.”

Each department is responsible for staffing itself and handles teaching appointments internally. With more than 50 departments and divisions using imperfect information, Aloise said, “There are too many points of failure.”

Aloise said he is currently working with the College’s Office of Undergraduate Education to develop a program, which will hopefully be in place by next fall, in which students can invoke their teaching guarantee and be placed on the payroll automatically.

“The act putting them on the payroll won’t have to be married to a specific course,” Aloise said. “That can happen in the background with all the shopping period drama, and then their pay will issue on time and in whole.”

To supplement their teaching positions, some students must obtain jobs outside of the University to pay their bills. Senderowicz often works at external consultancies because of financial instability.

“If I had the choice I would absolutely not be doing those consultancies. It is a huge time suck. It is completely distracting,” she said.

Last spring, Senderowicz was both a teaching assistant and a full-time student, and also worked a consultancy job.

“It’s really antithetical to the learning process when I’m not focused at all on my main reason for being here, which is to learn how to be an independent researcher and produce my own knowledge, because I’m just constantly having to think about where my next paycheck is coming from and where my next job is going to come from,” Senderowicz said.

Union supporter Kau’i Baumhofer, a student at the School of Public Health, is a teaching assistant for two different graduate school classes.

“My spring break will be grading 50 or 51 final papers,” she said with a laugh. But she was clear in her reasoning for taking on a double position. “It was to pay bills.”

The HGSU-UAW union effort considers all teaching fellows and research assistants to be graduate “workers.” Some of these student "workers" aren't under GSAS, so they are denied benefits that GSAS students have accrued.

Beginning next fall, the School of Public Health’s five doctor of science programs will be replaced by the Ph.D. in Population Health Sciences. As such, a new group of students will be brought under the GSAS umbrella.

Doctor of science students currently do not receive some benefits students in the GSAS enjoy, including a newly implemented MBTA discount and increased stipend and leave time for expectant parents.

“It makes you feel bad about yourself,” Senderowicz, the School of Public Health student, said. “It colors your whole experience when you see everyone around you doing the same thing as you’re doing, and getting so much more.”

However, Senderowicz said she believes GSAS students deserve all of the benefits they receive and more, but that she and her fellow School of Public Health peers should also receive similar benefits.

“My ire is not aimed horizontally at other students who have things that I don’t have, but at the university who is ok with that inequity and then still deprives people of the conditions that they need to live dignified lives,” she said.

The presence of the unionization effort has opened some students’ eyes to perceived disparities in benefits across graduate student education.

“If it weren’t for some involvement in the union, I would not have known about certain respects in which graduate students in other departments have things even tougher than we have in our department,” Davies said.

Over on the Longwood campus, Davis said she actually joined the unionization effort because she is aware of this disparity, despite her personal benefits and experience being fairly good.

“I feel like it’s a real responsibility if people have it very good to speak up for people who don’t,” Davis said.

Other students echoed her sentiments. Baumhofer and Davies are graduating soon, so they understand they will not reap the rewards they believe a union would bring.

“That doesn’t matter to me. I’m not involved and I’m not supporting this effort because I’m going to get something out of it,” Baumhofer said.

Davies echoed Baumhofer. “I want to leave making sure Harvard graduate students are in a better, more secure position than when I entered,” Davies said.

Due to an editing error, an earlier version of this article misattributed two quotes from Byron M. Davies.