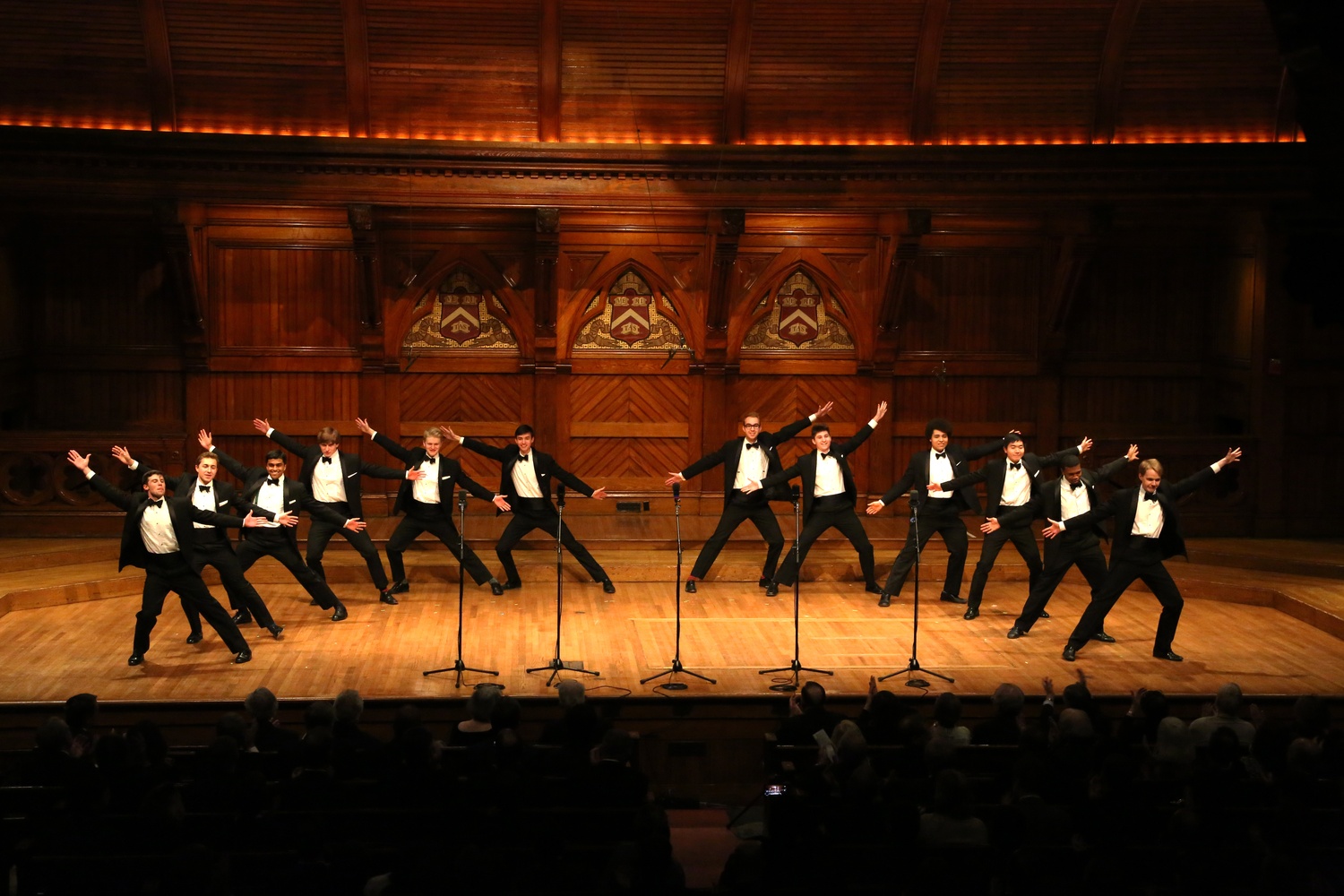 The Harvard Krokodiloes sang and shared favorite snippets of memories with the audience during their 70th anniversary concert in Sanders Theatre on Friday. Hundreds of Kroks alumni of all ages came from around the country to celebrate with festive banquets, reunions with friends, and renditions of old standards during the weekend-long event.

Surveying the packed house, Peter S.S.Y. Wu ’16, the group’s general manager, and Tom M. Keefe ’16, gave virtually no introduction to their set. Instead, their fellow current Kroks sauntered and jumped from the theatre’s wings and aisles onto the stage, where they moved in time with the jazzy, snappy harmony of “House of Blue Lights,” a Kroks classic opening number. The singers ricocheted from stage right to stage left before settling into a loose arc. Scatting, smooth jazz, and some signature whoop-de-doops ensued, triggering smiles and cheers from the audience.

Twenty minutes before, Kroks alumni, friends, and family had filed into Sanders and mingled among the rows of red leather benches. In the audience, Mark H. Rubenstein ’90 and his Kroks peers launched into tales about their time in the group in the early 1990s, reminiscing about their annual trips to Bermuda and their undergraduate-years tuxedos, which they affectionately dubbed “battle tuxes” because they sang and danced in them until the suits burst at their seams. “I think they brought their original battle tuxes [this weekend],” Rubenstein said, pointing assuredly to John D. Zedd ’90 and Jonathan H. Ebel ’92, sitting to his left. “I have a new one,” he added, as the lights dimmed and the show began.

After the Kroks of 2016 finished their first set—a scatty version of “Take the A-Train” and a rendition of “I’ve Got You Under My Skin” that featured high-powered snapping—the Kroks of the 1960s took to the stage. During “Stormy Weather” and “The Emblem,” standards from The Krok Songbook, the soloists, salt-and-pepper haired and often bespectacled, strutted to the mic, having ditched their tuxes, “battle” or otherwise, for suits and ties. When they took their bows at the end of the set, Sanders gave them a standing ovation.

Moving through the decades of the group, the Kroks of the 1970s put a political spin on “Let’s Do It,” by doctoring the traditional lyrics to sound like insults traded during recent presidential candidate debates. “This next song is about sex,” a 1970s Krok said to introduce the number. The musical jabs included, “Ben Carson might snooze through it,” “Bill and Hillary may not do it,” “And Donald Trump, he invented it—just ask him, they’re huge,” and “Bernie Sanders, we assume does it.”

When all the groups—current, alumni, and honorary Kroks—took to the stage for the traditional Scottish song “Loch Lomond,” their voices coalesced into one powerful strand. “It’s just heartwarming because all the groups come together,” Michael J. Sun ’97 said during intermission, with a smile on his face.

The current Kroks felt it too. “It was amazing,” Michael A. Wingate ’18 said, reflecting on the performance after the concert. “This whole weekend was spectacular. This one crazy thing we all have in common that all really comes together in ‘Loch Lomond.’” Keefe agreed, saying, “It transcends words.”