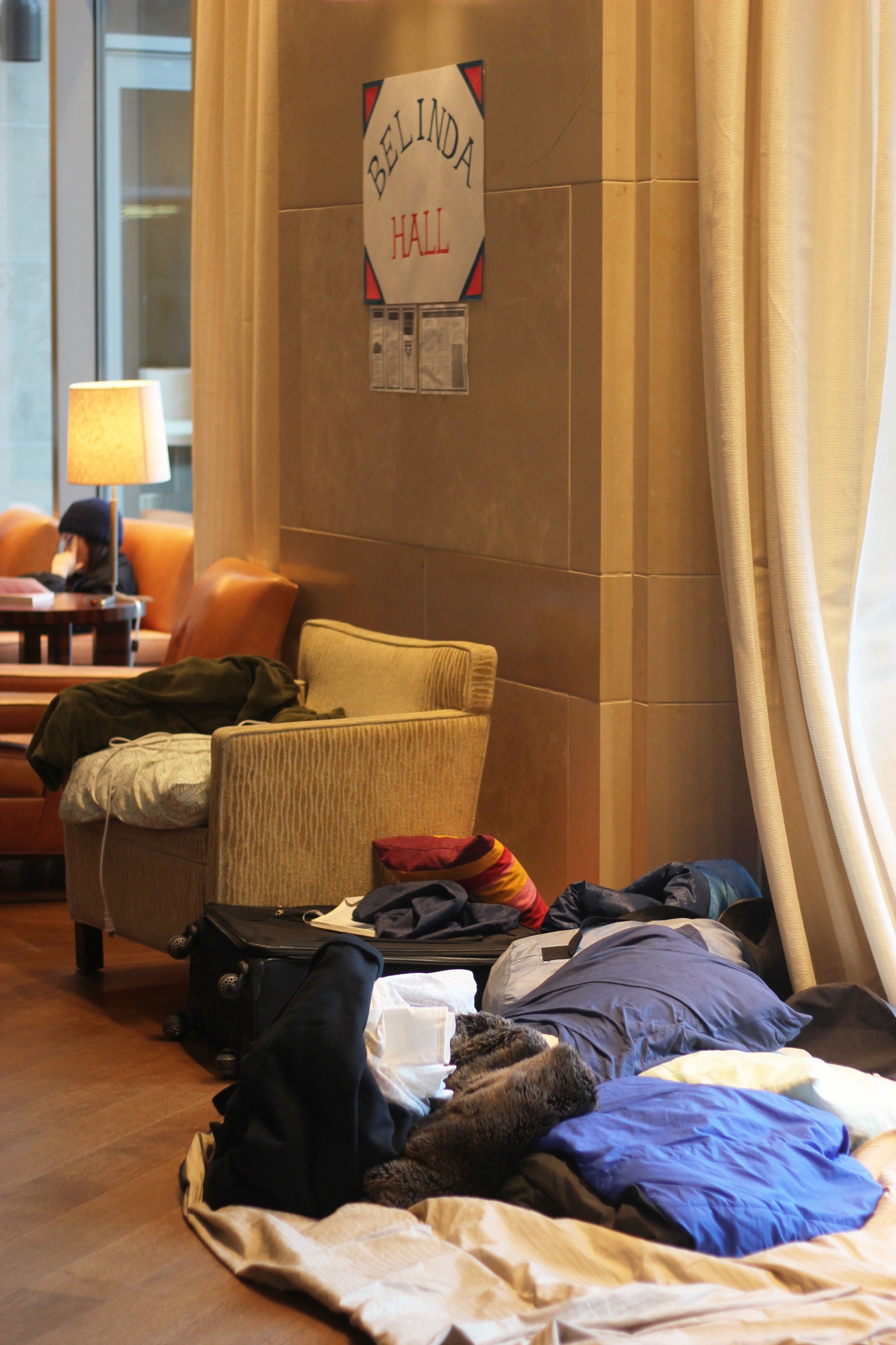 Pillows, blankets, and suitcases cover the floor in the Law School’s Caspersen Student Center lounge so student activists can continue to occupy the space as part of the Reclaim Harvard Law protests. The activists have now occupied the lounge, which they have dubbed “Belinda Hall,” for three weeks and plan to continue the occupation for the foreseeable future.
By Claire E. Parker, Crimson Staff Writer

Three weeks into their occupation of the lounge in the Law School’s Caspersen Student Center, student activists said they will remain in the hall, despite the concerns of other students and administrators. 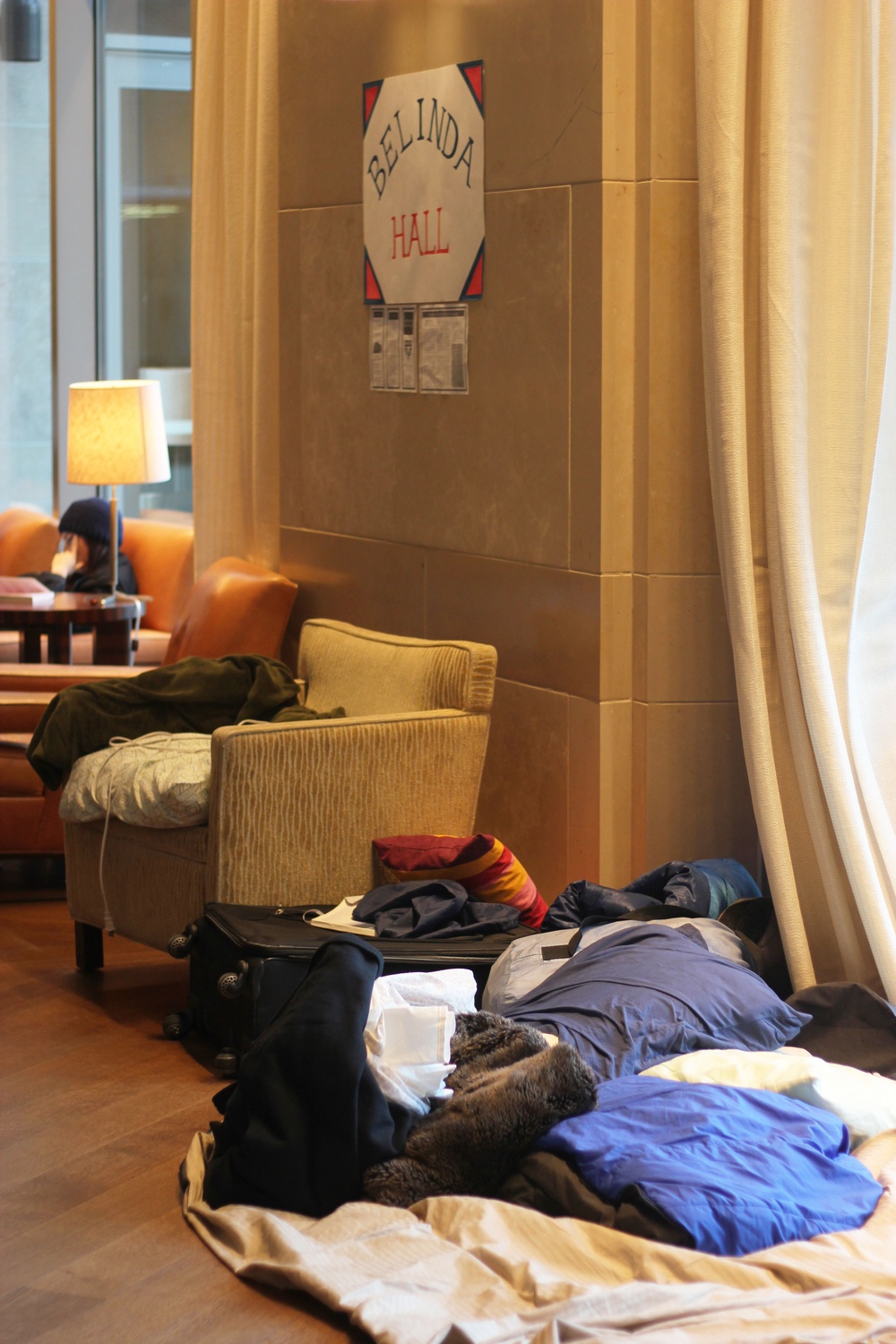 Pillows, blankets, and suitcases cover the floor in the Law School’s Caspersen Student Center lounge so student activists can continue to occupy the space as part of the Reclaim Harvard Law protests. The activists have now occupied the lounge, which they have dubbed “Belinda Hall,” for three weeks and plan to continue the occupation for the foreseeable future. By Lauren A. Sierra

Members of the student group Reclaim Harvard Law have occupied the lounge—which they have dubbed “Belinda Hall”—since Feb. 15 in order to create a space they say minorities on campus lack.

The occupation is part of an ongoing movement that began in November and has focused on calling for improvement in diversity at the Law School. While the school has addressed some of these demands—including convening a committee that recently recommended to change the school’s contentious seal—activists remain unsatisfied.

Over the past few weeks, occupiers have been sleeping, eating, and hosting daily events relating to critical race theory in the hall. Students from other schools, meanwhile, have joined in the effort.

“I think when we first started, we didn’t quite imagine exactly what it is we’re doing now,” Alexander J. Clayborne, a member of Reclaim Harvard Law and the group Royall Must Fall, said. “We’ve basically transformed the space into a school within a school.”

Some students, however, questioned the activists’ approach. One student critical of the occupation wrote an anonymous editorial in the Harvard Law Record, equating the activists to “bullies.”

The piece provoked a sharp, personal rebuttal from Law Record editor-in-chief Michael E. Shammas, who wrote that students in opposition to the occupation of the lounge self-censor by remaining anonymous.

Third-year Law student Steven B. Salcedo, who described his stance on activists’ demands as “ambiguous,” said he has found the protesters to be welcoming.

“The people who are protesting the lounge never turn people away,” he said. “Even though it’s an occupation, it allows other people to still participate and be in that space. They’ve been open, and that’s a good thing. It makes it a little less problematic in my mind.”

Still, Clayborne said he thinks dissenting students have generally shied away from the hall.

“We have heard from students who are concerned that the lounge is not sufficiently available to all who wish to study or spend time there, and from others who feel that the atmosphere in the lounge has not been consistently welcoming of varied—including dissenting—views,” she wrote. “I am writing to remind everyone of the importance of keeping the lounge accessible and welcoming to everyone.”

The email also raised administrators’ concerns about hygiene and room upkeep, and directed students to the University and Law School policies on public protest. Clayborne said occupiers have taken steps to address these points by rearranging furniture and assisting staff with cleaning the hall.

Activists said they were disappointed by Sells’ email. Jordan C. Raymond, who recently penned an op-ed in The Crimson explaining why she chose to join occupiers, said she felt Sells’ message created “a false dichotomy” between activists and students with opposing views.

Clayborne took issue with the premise that activists’ presence in the hall was not welcoming to all students. “We felt that comment to be very ironic because the reason we’re here is because we feel unwelcome on campus all the time,” Clayborne said. “And we don’t do anything to exclude anyone from the space, so frankly I don’t know what that comment is referring to.”

Student occupiers say they will stay in the hall for the foreseeable future. “We’re staying until something legitimate happens from the administration in particular,” Raymond said.

According to Raymond, some activists plan to remain there over spring break to ensure that their occupation continues.