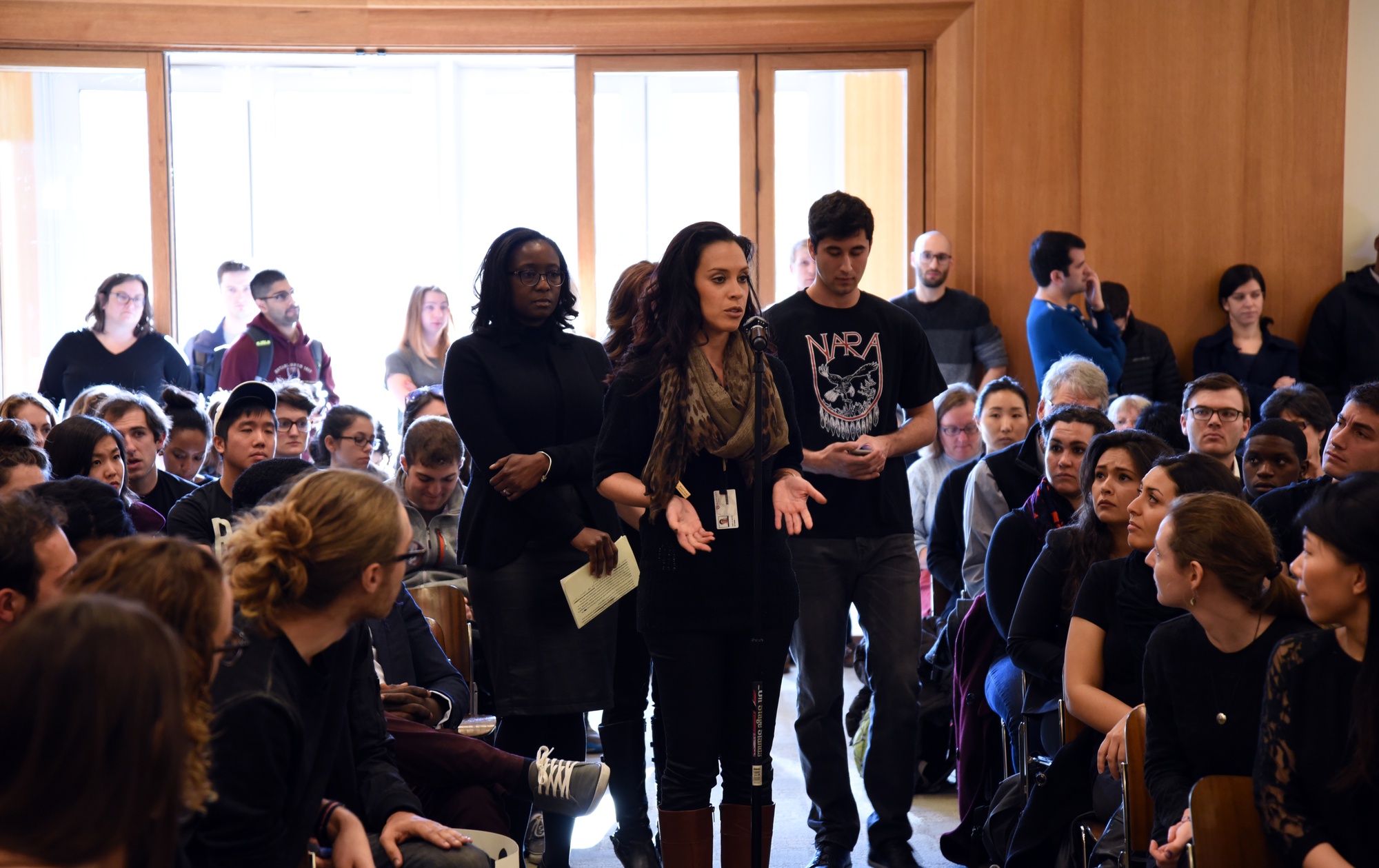 Amy E. Soto, a staff member at Harvard Law School, calls for the creation of a diversity and inclusion office at a community meeting on Friday afternoon. “We see that we’re not represented,” she said. “When I come to work, I ask, ‘Am I welcome here?’”
By Andrew M. Duehren and C. Ramsey Fahs, Crimson Staff Writers

At the third community meeting on race relations at Harvard Law School in as many weeks on Friday, students called on Law School Dean Martha L. Minow to produce a “strategic plan” to implement student demands they say will improve the school’s treatment of minority students by 9 a.m. on Monday. 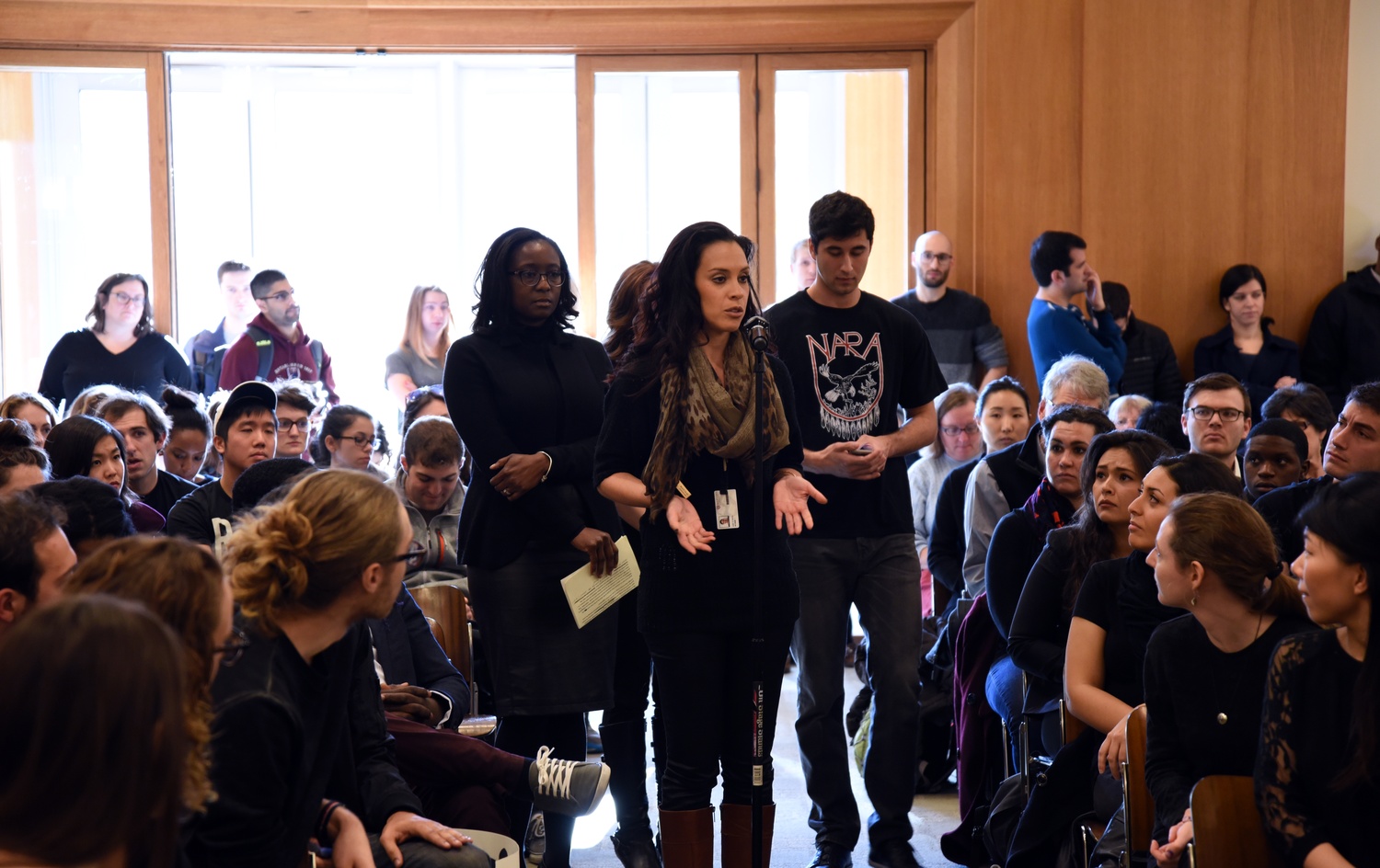 Amy E. Soto, a staff member at Harvard Law School, calls for the creation of a diversity and inclusion office at a community meeting on Friday afternoon. “We see that we’re not represented,” she said. “When I come to work, I ask, ‘Am I welcome here?’” By Michelle M. Ng

On Friday afternoon, hundreds of Law School students—many of them dressed in all black—piled into Milstein East Hall to continue an ongoing conversation about racism at the school that has intensified in the weeks since a racially charged incident rocked the campus. Police are investigating that incident, involving pieces of black tape placed over the portraits of black faculty members, as a hate crime.

A group of students stood up one by one to microphones on Friday and presented a series of demands to Minow and other administrators present. Students have also launched a website, dubbed “Reclaim Harvard Law School,” outlining their demands in extensive detail.

The students are reiterating some previous student demands, such as calling on Harvard to change the Law School’s seal, which students have criticized for its connection to a slaveholding family. They are also asking the school to establish an office devoted to issues of diversity and inclusion, require staff members to go through “cultural competency” training, and lower tuition and expand financial aid to “improve affordability and financial access to HLS for students of color, students from low socio-economic backgrounds, and otherwise marginalized students.”

Addressing issues of faculty hiring, the students have demanded that Harvard prioritize recruiting and promoting more minority staff members. They also want to see changes to the Law School’s curriculum: They call for a program in critical race theory with its own faculty, supported by at least $5 million, and structural changes to the general legal curriculum to “ensure the integration of marginalized narratives and a serious study into the implications of racism, white supremacy, and imperialism in creating and perpetuating legal analysis and thought.”

Lastly, they are calling on the Law School to form a committee tasked with overseeing the implementation of their demands. 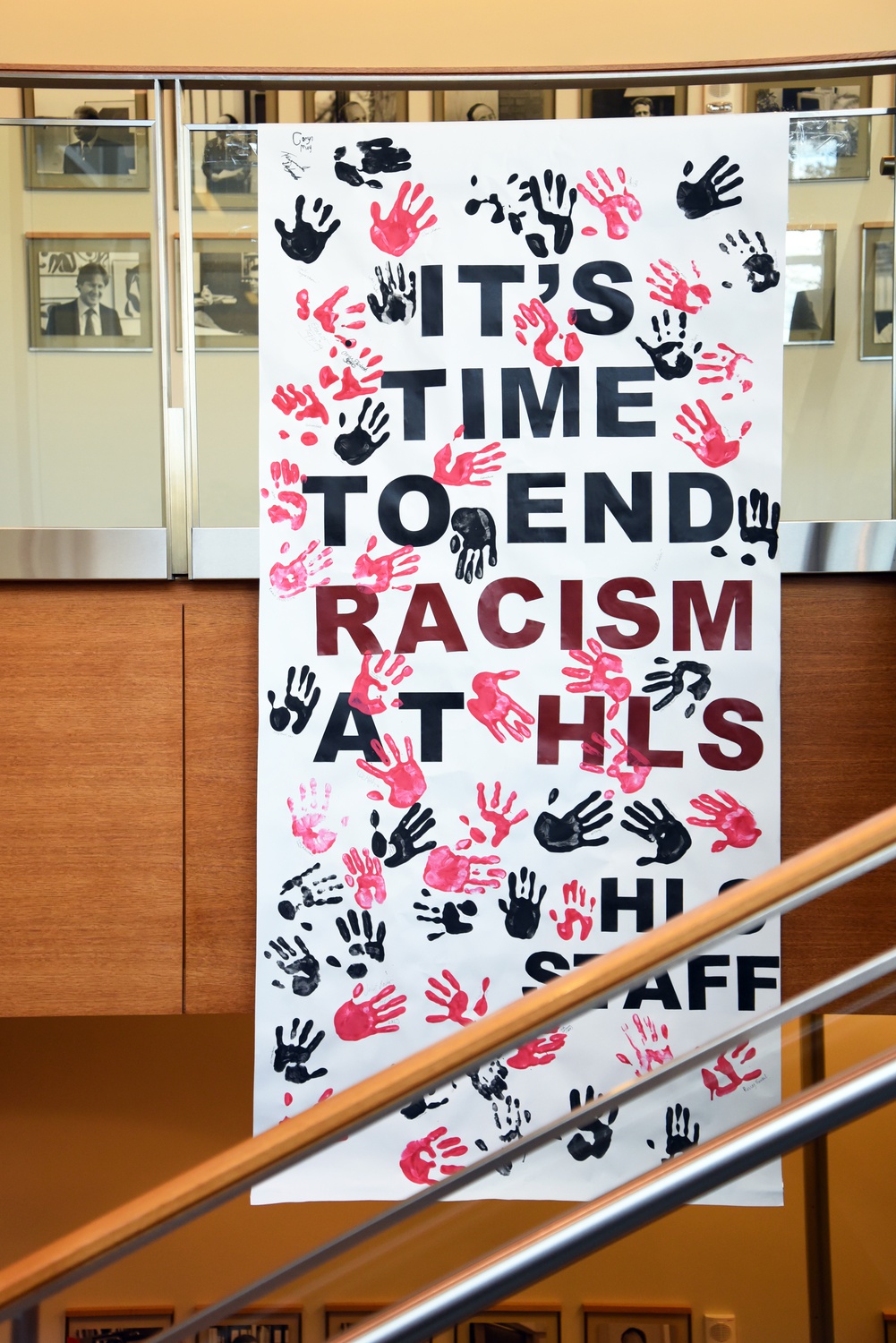 “End Racism at HLS” Sign - A sign reading “IT’S TIME TO END RACISM AT HLS,” signed “HLS STAFF,” hangs right above the portraits of black law professors that had been defaced with black tape in November. 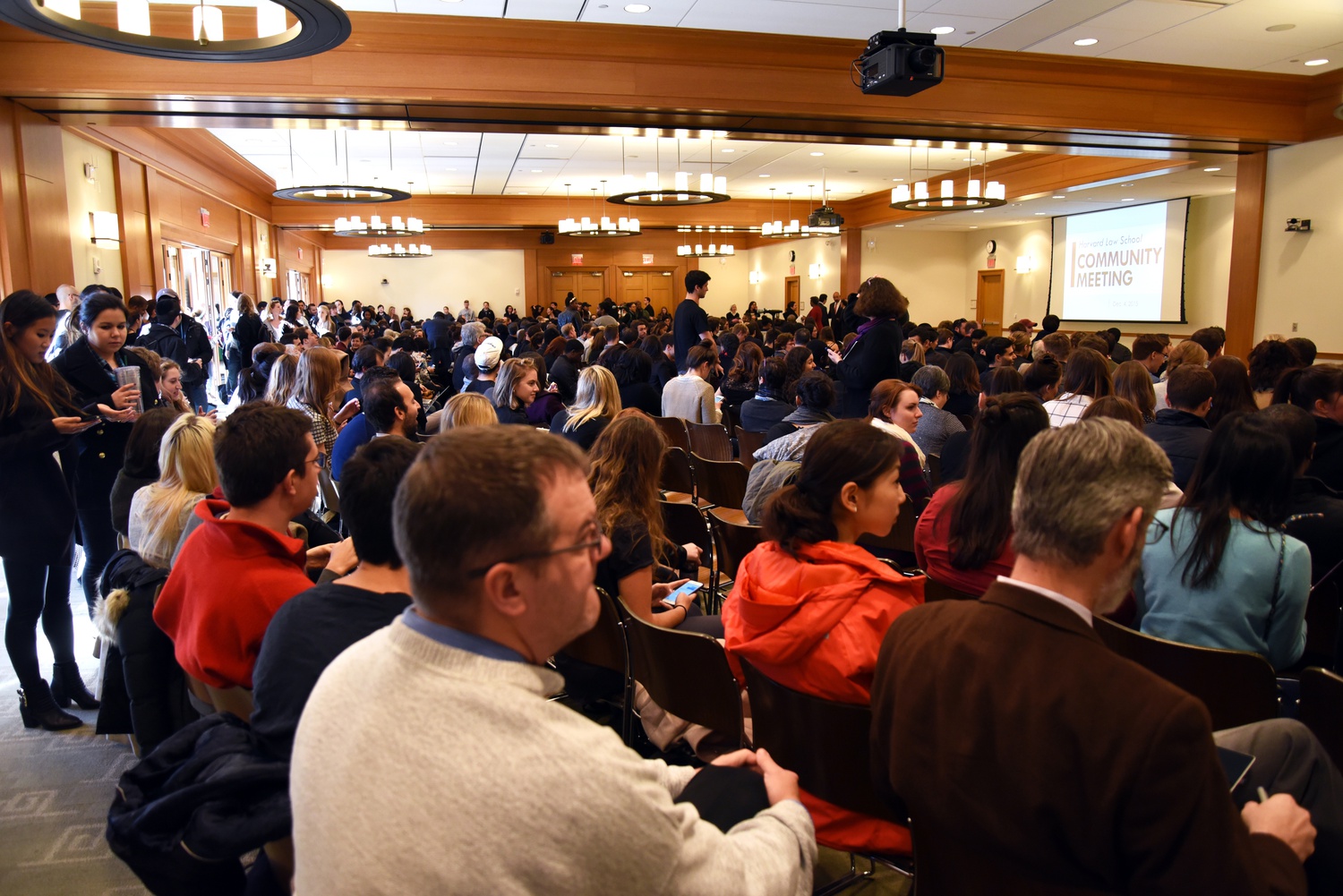 Amy E. Soto - Amy E. Soto, a staff member at Harvard Law School, calls for the creation of a diversity and inclusion office at a community meeting on Friday afternoon. “We see that we’re not represented,” she said. “When I come to work, I ask, ‘Am I welcome here?’” 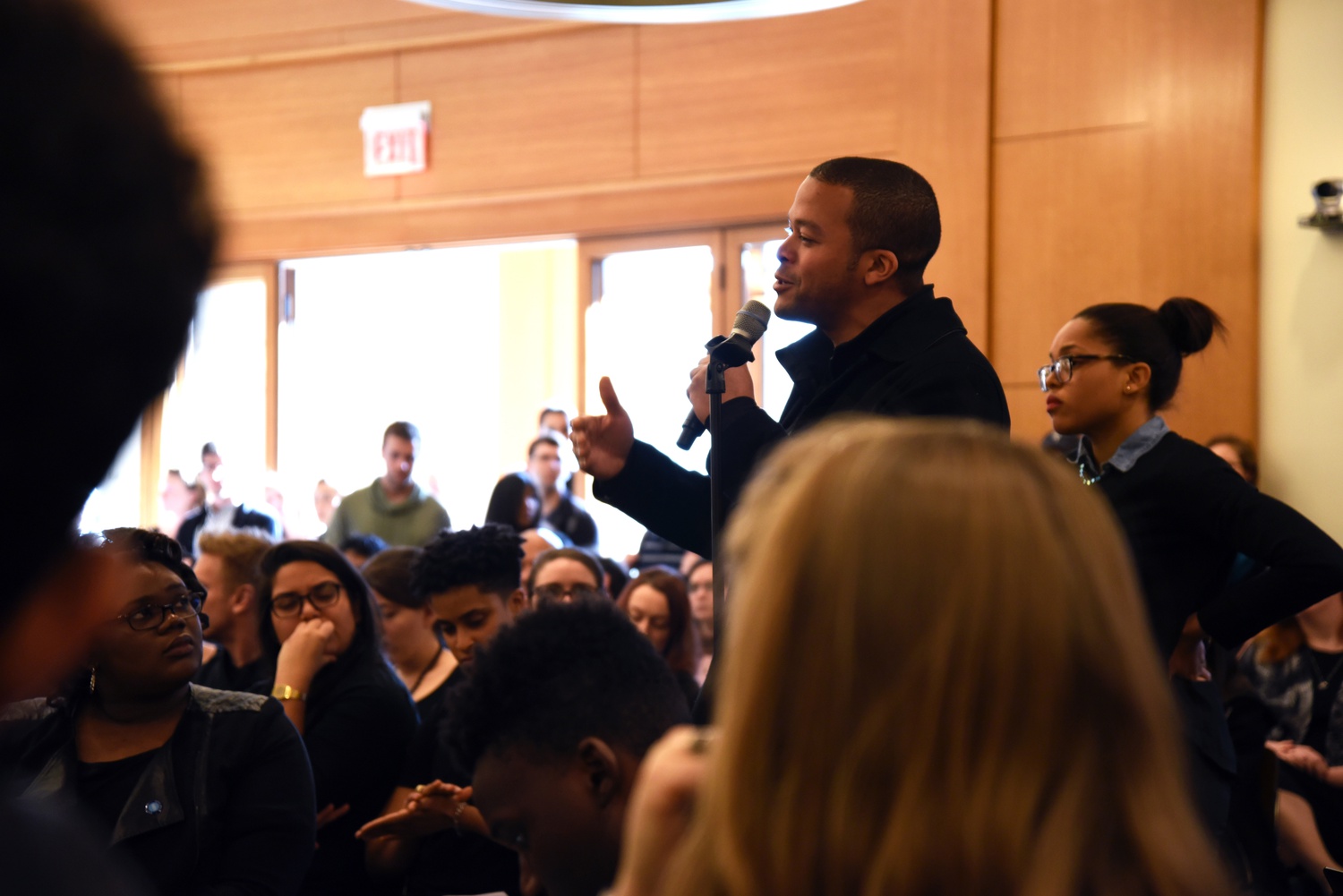 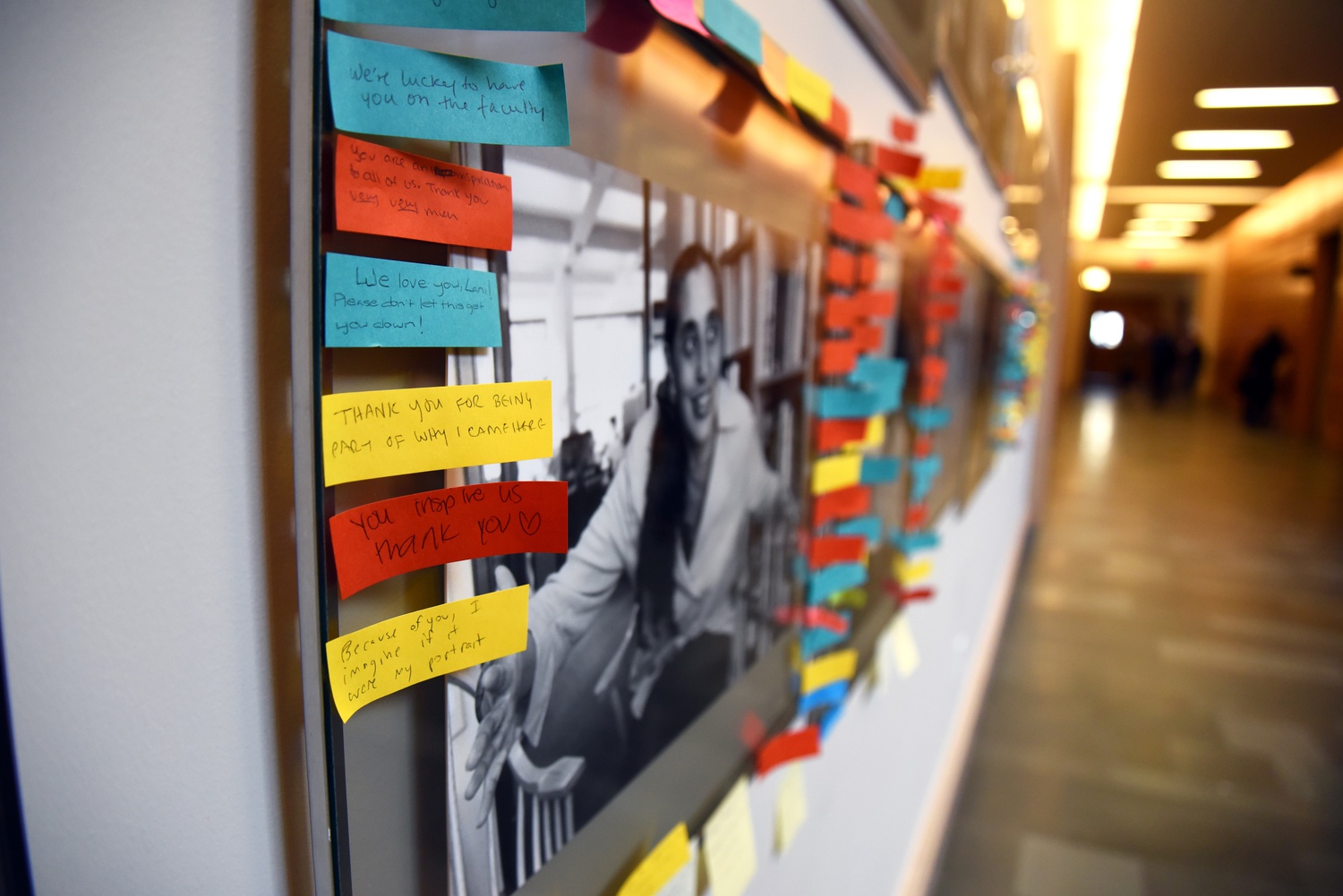 Post-its on HLS Professors’ Portraits - Post-it Notes with positive messages continue to border the photographs of black Harvard Law School professors after their portraits were defaced with black tape in November.

Minow, who listened as students read their demands on Friday, has faced criticism this month for what activists say is a sometimes unwelcoming environment for minority students at her school. She has already taken several steps to respond to some of the student demands and formulated her own plans to improve race relations at the schools. She has appointed a committee to consider changing the school’s seal, which she said last Monday would require the Harvard Corporation’s approval; administrators have also said they will work to create a more diverse faculty and hire a staff member to focus on diversity issues.

Still, Minow has faced pushback from some students. At a similar community meeting convened to discuss race at the school last Monday, several students criticized Minow for not giving them more time to air their views. She spent much of the Monday meeting discussing her own plans for change and scheduled Friday’s meeting as a follow-up.

On Friday, however, Minow primarily watched and listened as students spoke. “Thinking, listening, thank you,” she said, after Leland S. Shelton, the president of the Harvard Black Law Students Association, reiterated each demand and asked if she was prepared to immediately agree to any of them.

Some students were frustrated that she did not give a lengthier response to the presented demands.

“At the end of the day, with a community meeting, if it’s going to be a dialogue it needs to have some sort of response from the administration,” said Shay N. Johnson, a third-year Law student. “We feel as though she will not speak on these issues, which is unacceptable because she needs to establish a clear stance on it.”

Still, not all students agreed. William H. Barlow, a third-year Law student, stepped up to the microphone Friday “to offer a voice of dissent.” Praising the administration’s response to the tape incident, Barlow said the administration has “adopted policies to try to fix the problems here.”

“I think that too often, we, instead of wanting solutions, want to be angry,” he said.

In an email sent to Law School affiliates on Friday, Minow wrote that she will carefully consider the student demands.

“I listened carefully,” Minow wrote. “I will do my best to ensure that we find ways to work together, joining students, staff, and faculty to address proposals and above all to strengthen this School and its possibilities to be better and to make the world better.”