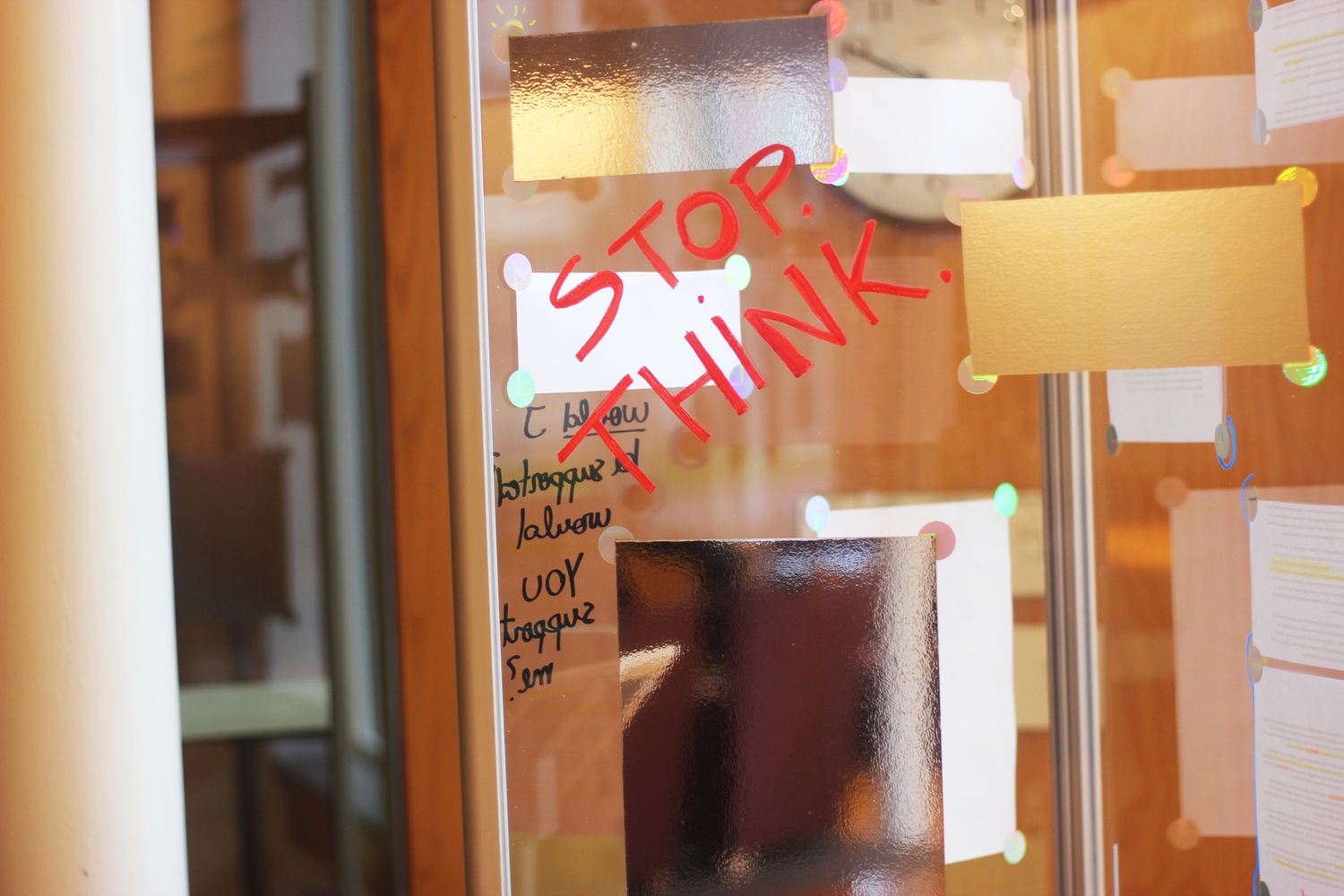 A triangular plexiglass column covered in cutouts of the University report on sexual assault stands in Ticknor Lounge on Tuesday. The column is one of 12 placed in common spaces around campus as part of an interactive art project produced by Devon M. Guinn ’17 and Delfina S. Martinez-Pandian ’17. By Lauren A. Sierra
By Jonathan G. Adler, Crimson Staff Writer

Students have constructed an expansive art installation featuring transparent columns in all 12 of Harvard’s upperclassman Houses—along with Dudley House and Boylston Hall—to call further attention to ongoing discussions about sexual assault on campus.

House residents on Tuesday found triangular plexiglass columns, which are covered in cutouts of letters and statistics from the University's sexual assault conduct survey. A sign next to the installation encouraged people to use provided markers to write their thoughts and feelings about Harvard’s sexual assault climate directly onto the plexiglass.

The project, entitled “Where Do We Go From Here?”, came about in response to the findings of last September’s “troubling” sexual assault climate survey, according to Devon M. Guinn ’17 and Delfina S. Martinez-Pandian ’17, the artists who led construction of the piece.

The project came together at a meeting for student leaders in the arts hosted by Jack Megan, Director of the Office for the Arts, following the release of the survey in September.

“When the report on sexual assault was released last fall, I was like everybody else. I was exceedingly upset by it,” Megan said. “I wanted to ask our arts community: is there a role for the arts to play in responding to this?”

Over weeks and months of discussion, the concept and design for the project emerged. Martinez-Pandian and Guinn had the help of local artist Ross M. Miller ’77 for the logistical work of creating and designing the physical structures. The students involved also met with administrators to ensure that the project was engaging the issue in a productive way.

“We think that this is a very important issue and it needs to be talked about and discussed, but also we knew that because it’s such a sensitive issue, we knew we had to be very thoughtful in our approach,” Guinn said.

To that end, Guinn, Martinez-Pandian, and Megan met with representatives of the Office of Sexual Assault Prevention and Response, the Office of BGLTQ Student Life, the Title IX Office, and the Harvard College Women’s Center.

After two weeks in the Houses, the 14 columns will be brought together for public viewing in Harvard Yard’s Tercentenary Theatre at the ArtsFirst festival. In the meantime, Martinez-Pandian says she hopes that people who view the installations will think deeply about the issues they discuss.

“The most important part of the structure is the reflective panels, the reflective surfaces on the sides of each column,” Martinez-Pandian said. “People look at the report, the excerpts, these panels of statistics, but then when they turn on to the other part of the triangular columns, they see themselves. By being reflective, we see the statistics reflected on us.”