​Harvard undergraduates are perpetually busy. But if clubs’ funding requests through a common grant application are to be believed, students may have to be in two places at once.
By Brian P. Yu 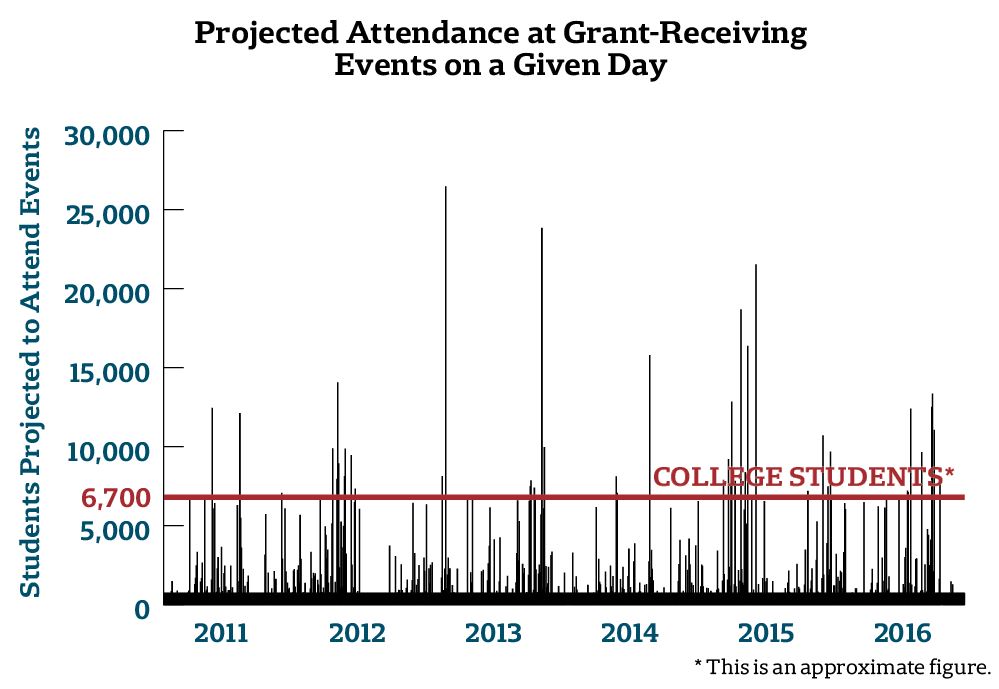 Harvard undergraduates are perpetually busy. But if clubs’ funding requests through a common grant application are to be believed, students may have to be in two places at once.

The club estimates paint a seemingly impossible picture, one that has made Undergraduate Council members in particular worried that clubs are inflating attendance figures to get more money.

For more than two dozen days in the past five years, the number of students attending an event that requested funding from a campus grant-issuing organization was projected at over 7,500 undergraduates, based on data from the common grant application collected by the Council’s Finance Committee last week. In one instance, on Dec. 5, 2012, all events together estimated an attendance of more than 25,000.

Harvard’s current undergraduate enrollment, by contrast, is about 6,700.

Many representatives suggested that the numbers reported by student organizations are often inaccurate, since even on non-outlier days, the daily number of undergraduates expected to attend events frequently exceeds 3,500. The UC has “funded or considered” about 59 percent of all events this year, according to the data.

“You’re telling me that one in two people attend all events on campus?” Greenlaw said. “There’s no way.”

Several members of the Finance Committee expressed concern over the high attendance numbers and raised questions about the UC’s ability to enforce its financial policies.

The UC calculates many of these grants in proportion to the number of students ecpected to participate in the event. Food is funded at $2 to $4 per student based on the size of the meal, and transportation is funded at $4.50 per person. So far this semester, more than 25 percent of UC funding has been based on attendance estimates.

The Finance Committee currently does not verify whether the numbers reported by student organizations are accurate. After the groups submit requests with attendance estimates, they must attend an interview with the Finance Committee and sometimes repeat or update the estimate.

Several Finance Committee members worry that student organizations may be inflating their attendance numbers in order to receive more funding.

“There’s very strong reason to believe that people are either miscalculating or misrepresenting the amount of people who are attending their events in order to get more money,” Greenlaw said.

“They might game the number of people for all we know,” Pforzheimer House representative Neel Mehta ’18 said. “You could just say 30 people attended it, even if you had no idea.”

Greenlaw acknowledged that student organizations more familiar with the committee’s policy could have an easier time defrauding the committee. For those groups, a stroke of the keyboard could mean a difference of hundreds of dollars.

“The more you know about the policy, the easier it is to game it,” Greenlaw said.

Given that many students perceive the Finance Committee’s policies to be complex, several student organizations have designated members responsible for handling the UC grants process. Harvard Undergraduate Biotech Association President Lena K. Afeyan ’17 said her organization’s success with receiving UC funding comes from having a designated person for the job.

“We’ve generally had a pretty good relationship with the UC,” Afeyan said. “ We’ve had pretty good luck. That’s because we have someone who’s trained for the position of applying for the grants,” she said.

“There’s a moral hazard,” Greenlaw said. “They have full information, and we don’t.”

In order to encourage joint events, the Finance Committee has voted twice in the past two weeks to create new financial incentives.

Under the latest version of the committee’s policy, called the “Club Collaboration Expansion Ordinance of 2016,” student organizations who collaborate to host events together will be immune from funding cuts that the committee issues. The committee has issued funding cuts for the past three consecutive weeks to all regular grants, in amounts varying from 6.6 percent to 29.5 percent.

Beginning in the fall, organizations that collaborate with one another will also be eligible to receive a financial bonus in addition to their existing funding. The Finance Committee has yet to determine the amount of that bonus.

Greenlaw said he hoped the legislation would address his concern that “campus is over-programmed.”

Although the legislation passed unanimously, not all Finance Committee members were convinced that the UC would be able to enforce the policy.

In response, Greenlaw said the policy would only be effective if the committee increased its scrutiny during grant interviews.

“The strength of the enforcement on this depends on our interviewing,” Greenlaw said. “If they can’t give an answer, it’s not really a collaborative event.”

In addition to promoting joint events, the Finance Committee is also exploring ways to audit student organizations that may misrepresent the number of undergraduates in attendance at events.

The UC currently does not audit student organizations to check that reported attendance numbers are truthful. However, in a recent letter to the UC, Greenlaw wrote that a discussion about an auditing policy would be coming “soon.”

Student organizations requesting funding are required by UC policy to submit a “Completed Project Form” to the UC Treasurer, in addition to itemized receipts to prove what they purchased with the grant money. Some UC representatives have suggested using the form as an auditing system, but according to current UC Treasurer Samarth Gupta ’18, multiple organizations requesting up-front grants this semester have not submitted the form.

“We’ve been looking into a better mechanism for us to keep track,” Gupta said.

Until the Finance Committee establishes a formal procedure to audit student organizations, the committee has no option but to believe the numbers provided in grant requests, Greenlaw said.

“We do not have the infrastructure or the know-how to rigorously assess how many people are going to show up,” Greenlaw said. “Until we implement an auditing program, we have to take people at their word.”

Still, several Finance Committee members said that the consequences for failing a UC audit would need to be harsh.

“If we catch you lying, you lose all funding,” Li said.