The Harvard Dance Project Presents Interdisciplinary Answer to “What Moves You” 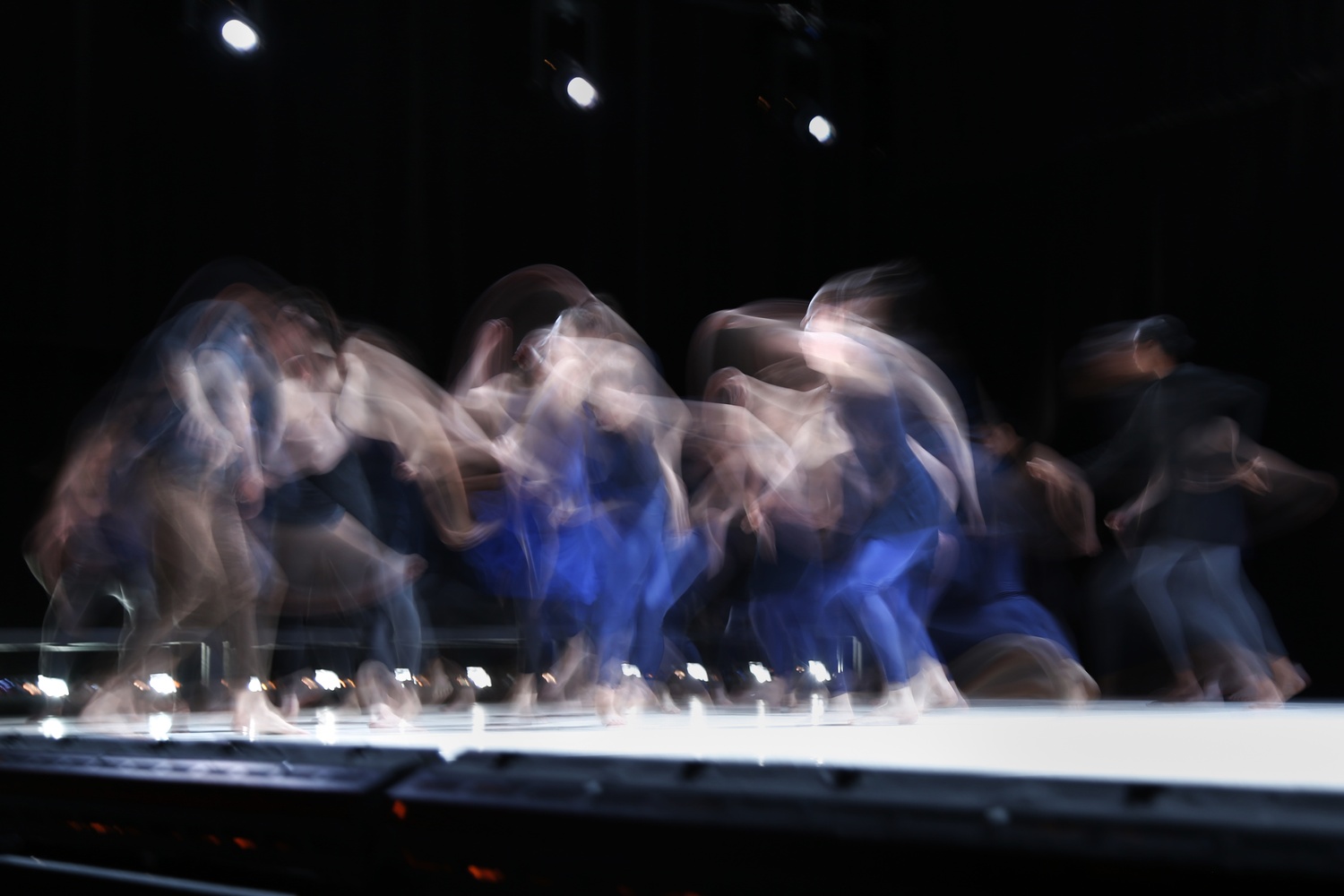 "I want to hold [time] in my arms and tell it thank you/I’m done progressing through life/I want my soul to move through moments and decide their worth for myself," recited Anna K. Antongiorgi '19 during ‘What Moves You?’ a Harvard Dance Project performance combining dance, music, and poetry in April. The cast worked with choreographers to translate answers to the question ‘What moves you?’ into movement. By Madeline R. Lear
By Emily Zhao

The Harvard Dance Project’s “What Moves You,” a collaboration between choreographers Jill Johnson, Francesca Harper, and Mario Zambrano, incorporated writing, sound, and the experiences of its dancers into its creation and performance. Highly interdisciplinary and introspective, the production ran in Farkas Hall from April 14-17.

Jill E. Johnson, who serves as Harvard’s director of dance and senior lecturer in the Department of Music and Theater, Dance, and Media, traces the original inspiration for the show to a reflection upon larger cultural movements. “We were thinking a lot about what was happening in the greater culture—issues of discrimination, cultural identity, how that touched on dance and environments that we’d been in, and in particular how those things are affecting students,” she says. “We weren’t sure where that was going to lead.… We wanted to make sure there was enough time to really talk through things that people were thinking about, and so we kept coming back to the question that seemed to be particularly rich terrain for us, which is: What moves you?”

During the show’s formative process, the dancers were asked to write a response to this foundational question. Their answers found their way into the final production as moments of spoken word, comprising both recognizable sentences in the form of letters to the dancer’s future selves or younger siblings and grammarless phrases that could be more accurately categorized as word associations. Students spoke to their hopes and fears: concerns about how society takes control of bodies and identities, how race and gender seem to restrict art, preoccupation with time, and fear of failure. Certain phrases that the dancers generated recurred throughout the show along with their corresponding dance motifs. Dancers tapped their chests twice with an open palm in homage to the more organic practice of keeping time in heartbeats rather than ticked-away seconds or days.

For performer La’Toya Princess Jackson, the process of generating and perfecting such an intimate and multifaceted work was quite challenging and extremely rewarding. “We had to explore movement from a deeply personal place,” she says. “Interweaving and connecting our experiences to one another, we had to find ways to share what moves us through words and translate those words into movement phrases. It was a deeply moving and enriching experience for all the dancers involved.”

Johnson notes that the show’s structure differs from what many of the dancers might have been accustomed to. “We’re exposing a way of making that’s very iterative, generating a ton of things, practicing things, and it’s not necessarily linear,” she says. “The sounds, too, spoke to this form of creation, varying from live singing to excerpted instrumental melodies and soft recorded street noises. [They are] dialing in and out of focus with the lights and bodies’ motions.”

The internal monologue of “What Moves You” extended clearly to many of its audience. “What I love about this show is just that it’s so iterative,” says audience member Sofia A. Escudero ‘16. “You recognize things and see things repeat and change and evolve. That’s always moving to me, to see dancers just having this communication that’s palpable in the air.”

To build upon the show’s more outwardly directed, social aspect, audience members had the option of writing their thoughts down on Post-It notes as a form of off-the-grid Twitter. “There’s a discovery energy that’s very compelling to watch in real time…. An audience member might not be able to put their fingers on it, but they’ve had the experience being in consort with the cast, because it’s such an intimate piece.” Johnson say.