Harvard and the Hub

Boston Mayor Marty J. Walsh has forged a collaborative relationship with Harvard President Drew G. Faust as the University expands across the river 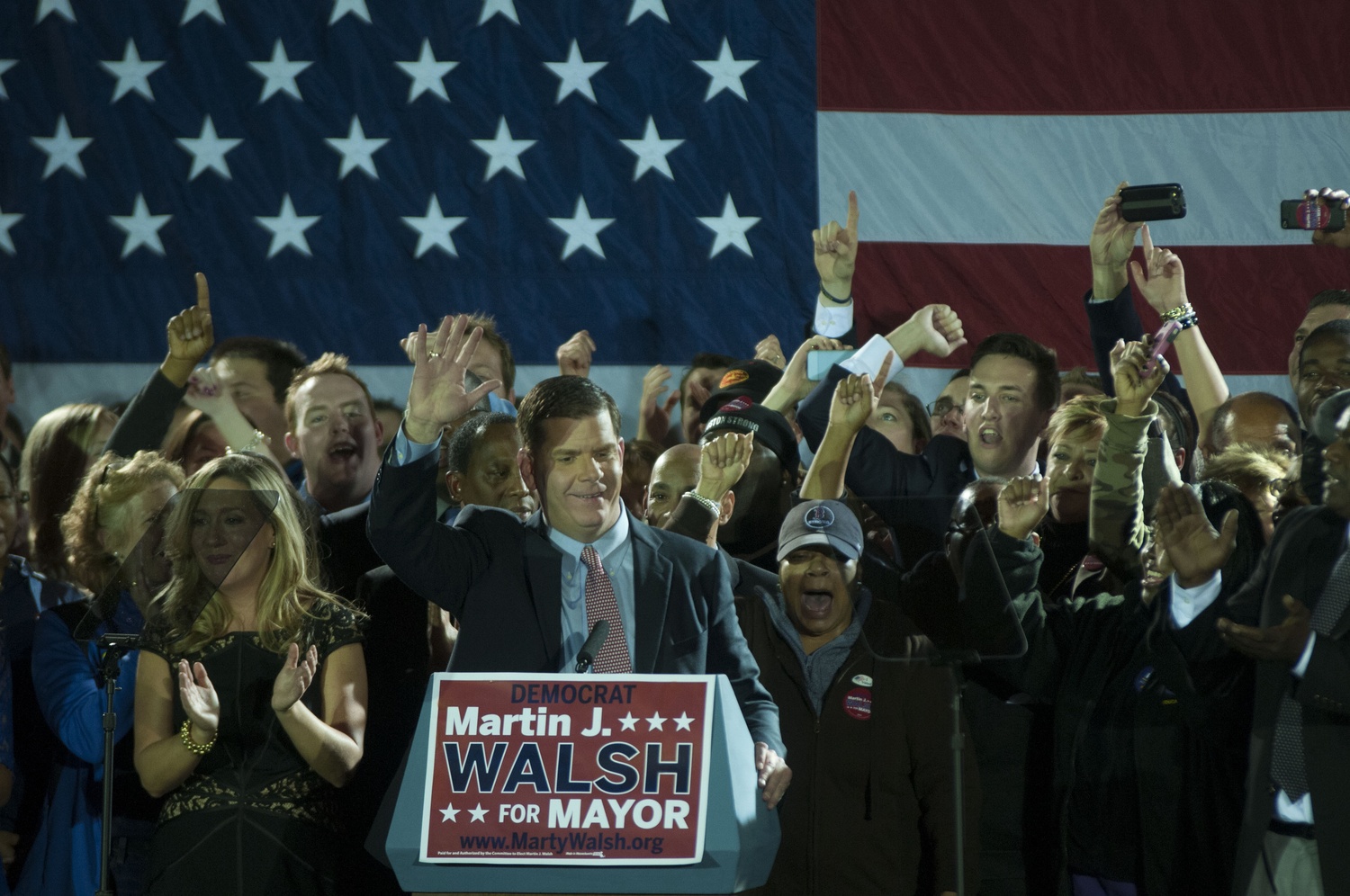 Like Harvard’s Mather House, Boston’s city hall sticks out like a sore, concrete thumb. A geometrically quirky fixture in downtown Boston, it houses the city’s government. Perhaps it is the same aversion to concrete that Harvard students experience that led Boston Mayor Marty J. Walsh to designate McKenna’s Cafe —a wooden-paneled, classic diner in Dorchester, Massachusetts—as one of the de-facto alternative meeting places for his pow-wows with local leaders. Among these diner frequenters isHarvard’s President Drew G. Faust.

In many ways, the location of these meetings represents a continuation of a tradition observed during previous Mayor Thomas M. Menino’s term. During the latter half of his 20-year tenure, Faust would occasionally steal away from the bustle of Harvard’s sprawling Cambridge campus to meet Menino in the quaint neighborhood of Hyde Park. His private home at the time—an approximately 1,700 square foot residence on Chesterfield Street—served as the locale for many of their conferences.

Casey said Faust and Walsh meet “regularly, on a semi-annual basis” to discuss a wide range of topics. Though formal agendas are not set ahead of the meetings, the discussions ultimately migrate to the topic of the Allston neighborhood—Harvard’s chief target for expansion in Boston over the past decade.

That Faust and Walsh meet intermittently might seem to indicate a departure from the close relationship Faust forged with Menino. Both Faust and officials from Walsh’s office assert that is not the case.

In Faust and Walsh’s relationship there exists a glimpse of a bigger picture—a reflection of the ever-evolving partnership between Harvard and its neighboring city, which currently focuses on involving Harvard in after-school and educational programs in Boston.

The two leaders—Faust and Walsh—face even more of an age gap than Faust did with Menino. An almost five year age difference separated the two, yet Faust still described their relationship as one of mentorship. In comparison, Walsh is 49 years old.

“It’s partly not being in that student-teacher situation that I was in with Menino,” Faust said. “I was thinking about Marty Walsh the other day, and I think he’s 20 years younger than I am.”

Still, a potential mentorship implicit in that age gap does not exist; they are peers in the most literal of senses, collaborating on some of the biggest projects to hit Allston in the last few years.

“It’s not like I’m in any sense a mentor to him,” Faust said. “But it’s a more even playing field. It’s more conversational. I enjoy his company a lot, I admire his commitment to the city.”

The feeling is largely mutual, Walsh’s chief of staff, Daniel A. Koh ’07 said. Koh, who oversees the Mayor and knows the details of his schedule, said Faust and Walsh meet regularly, with the two often alternating between Dorchester and Faust’s residence in Elmwood for breakfast chats.

Casey described these meetings as an opportunity for Faust and Walsh to meet “leader-to-leader.”

Their disputes are scarce, but have historically been about details in Allston. Generally, there’s a feeling of mutual respect between the two, even if the sense of public companionship that existed with Menino is not as visible with Walsh.

“I just know that now there’s a sense of respect, and it’s a really positive thing,” Koh said. “I think we see Harvard as an opportunity to collaborate and do some really great things for the students and people of Boston, and not at all as an adversary.”

Koh said Harvard interacts more with the city of Boston than MIT does, largely because of the vast real estate stake it has in the city.

“She is cognizant that he and his administration have very high expectations of Harvard as both a partner and a neighbor, and is committed to doing right by him and by the community,” Casey said.

Though Faust and Walsh, and even Faust and Menino, boast a relatively cordial relationship, Harvard did not always work so smoothly with the City of Boston.

Trouble Across the River

Almost two decades ago, news broke that Harvard had been secretly buying up land in Allston, hiding its identity by making the purchases through a separate entity. Menino, the longest-serving mayor in the history of the city, denounced Harvard’s actions with strong rhetoric, writing in a letter to then-University President Neil L. Rudenstine that Harvard’s actions represented “the highest level of arrogance seen in our city in many years.”

In the years after the news first circulated, communication between the University and officials in the City of Boston grinded to a definitive halt. With relations between the city and the University effectively splintered—some at the time thought beyond repair—Harvard officials found themselves hard-pressed to continue their development plans without the blessing of the mayor.

Robert Winters, the editor of the Cambridge Civic Journal and a Math instructor who worked at Harvard during Rudenstine’s tenure in the 1990s, said that from his observations, many in Allston were angry at Harvard’s expansion efforts.

“I think it was the fact that, at the time, it was done so surreptitiously,” Winters said.

Winters added that Cambridge residents were largely apathetic to the news. “It probably depended on your own prior feelings about Harvard,” Winters said. “And there are people who have always had a bit of a bad attitude about Harvard.”

The appointment of President Lawrence H. Summers in 2001 was the first step towards assuaging the tensions between the two entities. Almost immediately after assuming the position, Summers went on a diplomatic mission of sorts to Menino to ease his mind about Harvard’s plans, largely because the University was aware of the fact that, without the mayor’s blessing, its plans in Allston would be hard to come by.

At the forefront of their discussions: how Boston and Harvard could work together and advance their mutual interests. Ultimately, the key to calming these tensions between the two was transparency.

“The mayor and I kind of agreed that we weren’t going to surprise each other,” Lawrence Summers said in 2013. “If something interesting was going to be in the Boston Globe, we’d let each other know beforehand.”

That spirit of transparency continued into Faust’s presidency, though the two adopted a mentor-student relationship upon meeting one another.

“He was hugely experienced, hugely politically astute,” Faust said. “He gave me great advice. He was very much a mentor, and I was the student in lots of ways of his wisdom and insight.”

With several other universities flanking Harvard on all sides in Cambridge, much of the University’s development has thrust out and across the Charles River. The location: Allston—a working class neighborhood where many of Harvard’s community-oriented centers have been erected.

“It’s a little known fact that Harvard owns more land in Boston than it does in Cambridge,” Koh said. “It’s a big land owner in the city, and I think it’s important for us to have a very productive relationship.”

Now, with the University’s relationship with the city at a high point, Faust and Walsh’s collaborative relationship is visible through their joint attendance at events in Allston.

Harvard has expanded its programs at the Ed Portal in recent years, including offering scholarships for summer science programs and free academic mentoring from undergraduates, both for local schoolchildren.

“Our colleges are filled with talented people who can help our kids,” Walsh wrote in an emailed statement. “Having positive role models to help guide them through life is key and it ties into my administration’s Mentoring Movement, in partnership with Mass Mentoring. I hope to see more community projects like the one in Allston, and I look forward to working with President Faust to achieve our shared goal of a strong Harvard/Boston partnership.”

One of Harvard’s latest installments in Boston is the Ed Portal, is an educational innovation center in Allston, where Harvard hosts after-school programs for neighborhood students at no cost to local residents. This February, at an event celebrating the grand opening of the Ed Portal’s new locale, the two spoke about Harvard’s role in Boston.

“Programs like the Harvard Ed Portal are a great example of how Harvard can work with the City of Boston, and its surrounding neighborhoods, to create community dialogue,” Walsh wrote.

Aside from in Allston, Walsh and Faust have collaborated on expanding a fellowship program between the City and the Harvard Business School to include students from the College, Koh said. Currently, the Mayor’s office takes on HBS students to work in City Hall throughout the school year.

“We are exploring an opportunity to take the same premise that happens at Harvard Business School and do it with undergrads,” Koh said. “We’ve seen a lot of great ideas and a lot of great things come out of our leadership fellows program for graduate students, so there’s not a reason undergraduates can’t have the same effect.”

Harvard’s investment in Allston is set to continue into the foreseeable future. Harvard has recently allocated $5.3 million to public improvement projects in the Allston neighborhood. At a meeting in March, the City of Boston and Allston residents requested that Harvard allocate a portion of that money to renovate a park in the area.

Additionally, Harvard announced plans to open a life science innovation lab in the parking lot west of Harvard’s four-year old i-Lab. The building will house co-working spaces and a myriad of labs, including a private faculty-in-residence lab suite.

Walsh reiterated the importance of making sure that Allston residents are included in the development process.

“My job as Mayor of Boston is to advance the interests of all of Boston’s residents, and it’s vital their voices are heard when it comes to residential development in Allston,” Walsh wrote. “I look forward to continuing our work with President Faust to ensure Boston’s residents have a voice during this process, and that their best interests are protected.”