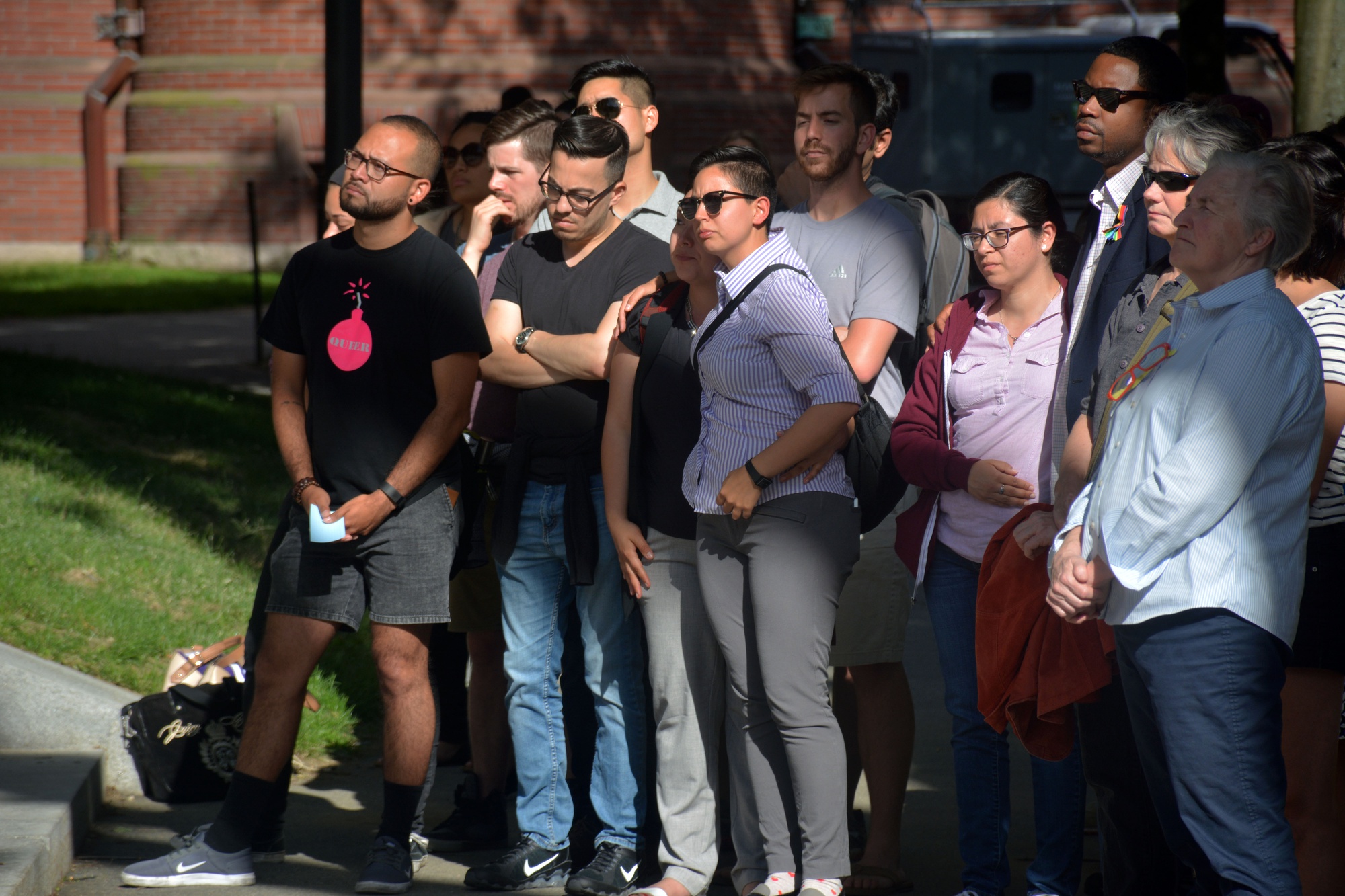 More than 200 Harvard affiliates gathered at the steps of Memorial Church on Tuesday to remember the victims of the Pulse Nightclub shooting in Orlando.
By Brandon J. Dixon, Crimson Staff Writer

Tears and embraces rippled through a crowd of more than 200 Harvard affiliates who gathered at the steps of Memorial Church early Tuesday evening to commemorate the victims of a brutal attack on a gay nightclub in Orlando.

Forty-nine people were killed by a lone gunman at the nightclub Pulse early Sunday morning, marking the largest mass shooting in U.S. history. The vigil at Harvard was somber as those in attendance reflected on the tragedy, and many people called on others to respond to the attack with action, not passivity.

University President Drew G. Faust, speaking at the beginning of the vigil, called the crime “brutal and senseless” and urged the crowd not to “lose sight of the common humanity” in the face of the inhumane.

But while Faust elected for a more muted tone in her remarks, asking Harvard affiliates to address the tragedy through a show of community, some speakers expressed anger and anguish. 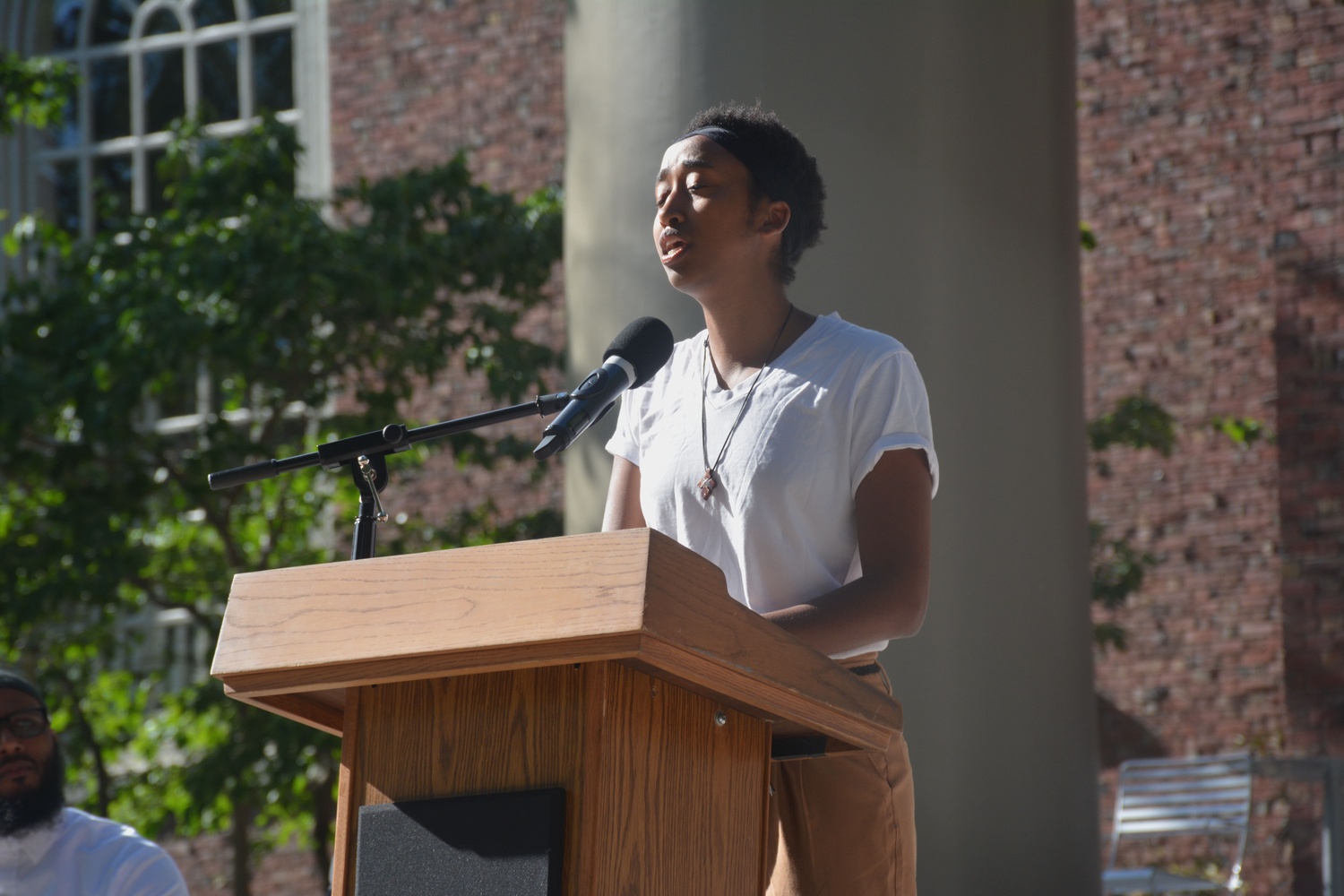 Eden H. Girma '18 performs "Ella's Song", encouraging the crowd to join in on the refrain "we who believe in freedom cannot rest until it comes". By Megan M. Ross

Eden H. Girma ’18 took to the podium to deliver a performance of “Ella’s Song,” encouraging the crowd to join in on the song’s refrain, “We who believe in freedom cannot rest until it comes.” The crowd was at first hesitant to sing, but did so more loudly by the third chorus.

“I want to figure out how best to speak up, step up, to act up,” McCarthy said.

“I want us to be clear about something,” Walton said. “Our purpose here is not a passive one.”

He invited the people gathered at the vigil to fill out multicolored index cards with pledges of the action they would take against incidents like Sunday’s shooting, and to line the steps of Memorial Church with the cards. 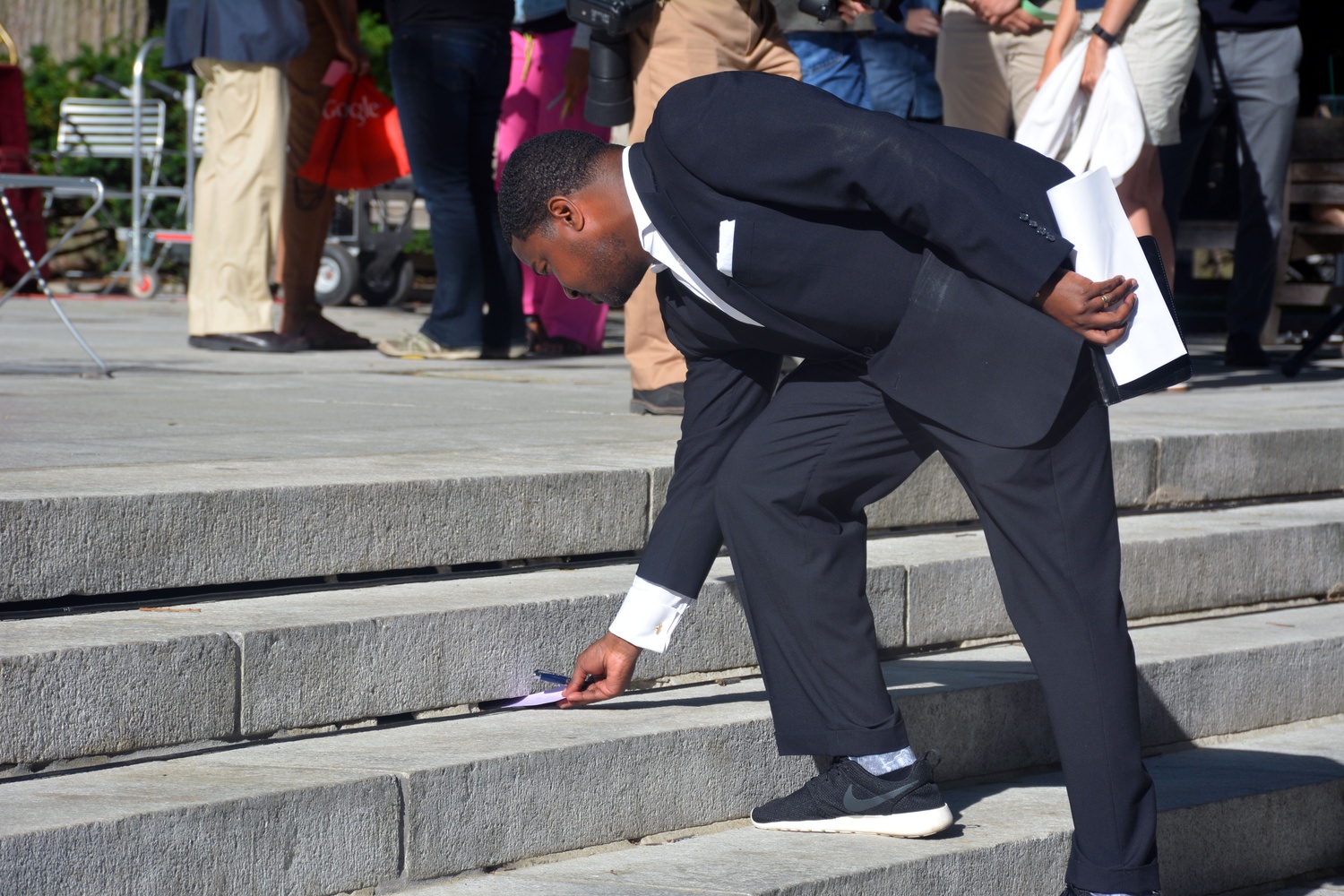 Pusey Minister of Memorial Church Jonathan L. Walton places an index card on the steps of Memorial Church. Those in attendance were invited to write down on colorful cards the actions they pledged to take to combat hate and violence in the future. By Megan M. Ross

In his remarks, Walton slammed the National Rifle Association for what he described as “John Wayne fantasies and insecure masculinities.”

“We will not accept a new norm of one nation under a gun,” Walton said.

University leaders also took to email and social media in the wake of the tragedy to express their sadness over the shooting in Orlando and reach out to students who may have been affected.

On Monday, Faust released a statement on Twitter offering sympathy to the families affected by the shooting and encouraged followers to read a New York Times article written Harvard fellow, Jim Downs, about the previous largest massacre of gay people that occurred in New Orleans in 1973.

While much of the national public discourse around Sunday’s events has focused on terrorism and gun violence, Dean of the College Rakesh Khurana sought to recenter the discussion on how the tragedy affected the BGLTQ community. In an email to College affiliates Monday, Khurana encouraged students to consider adding hashtags of support in the wake of the tragedy to their online posts.

At the vigil, Khurana joined four other students at the podium to read out the names of the 49 victims of the shooting, many of whom were in their twenties. A long moment of silence followed the tally.