With Bike Locks, Activists Chain Themselves to City Hall at Demonstration 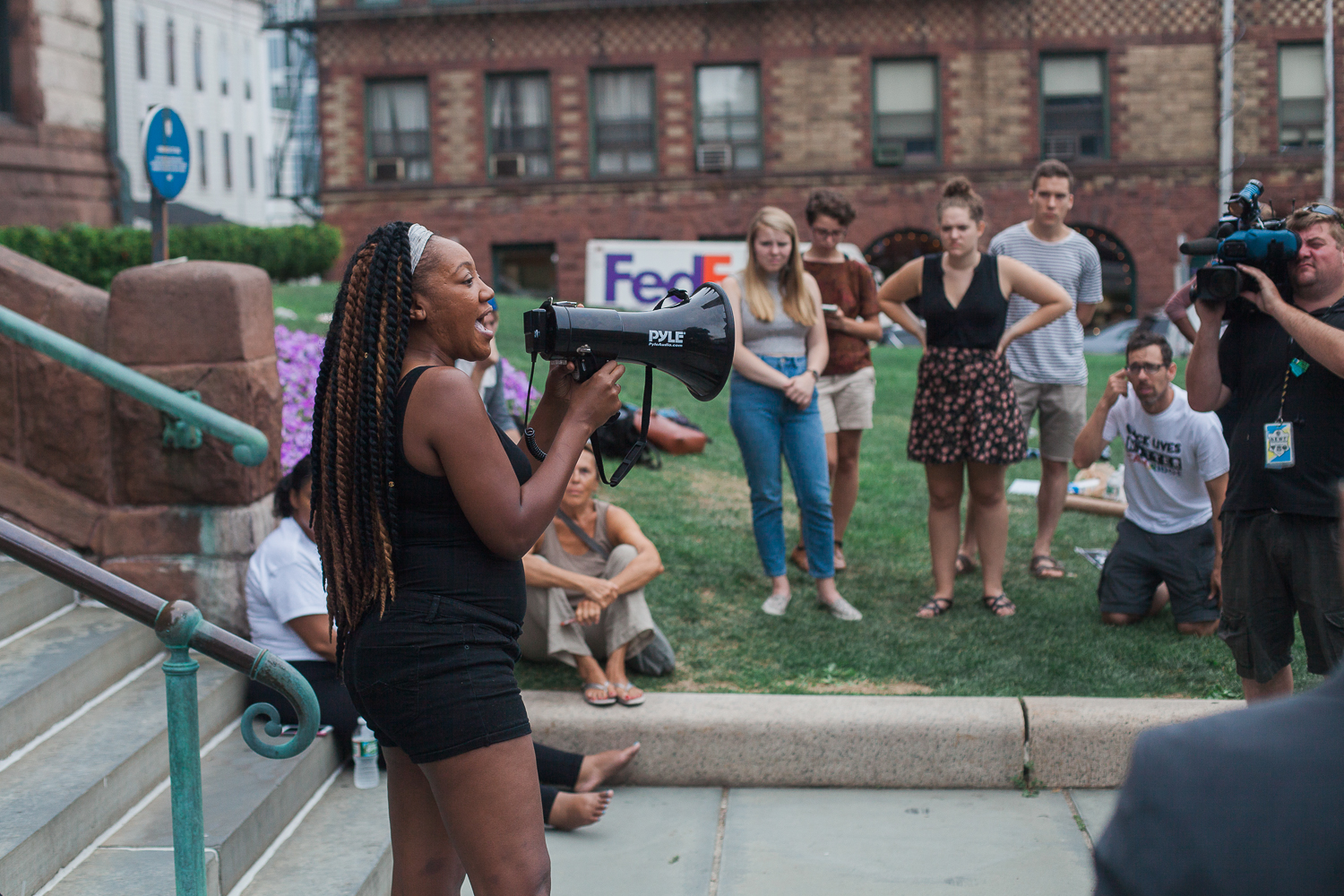 A speaker shares her experience of not being able to afford housing in Cambridge, making it difficult to get to work and earn a living.
By Marella A. Gayla, Crimson Staff Writer

Four protesters chained themselves to the front doors of Cambridge City Hall, as Black Lives Matter activists and allies gathered to demand changes to the city’s affordable housing policies. 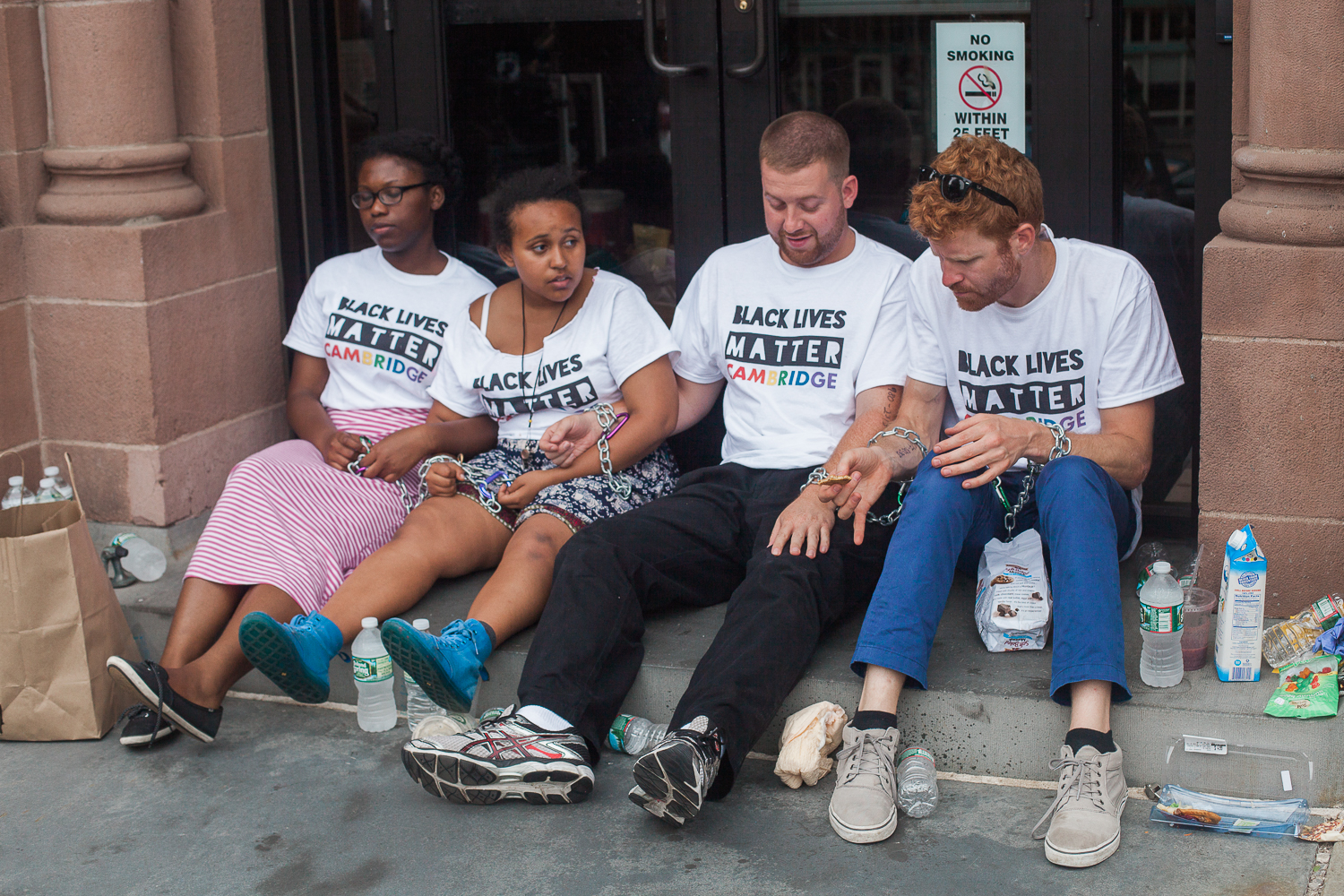 Four members of Black Lives Matter Cambridge chained themselves together and occupied the entrance of Cambridge City Hall in support for affordable housing in the city Wednesday afternoon. By Katherine L Borrazzo

“Most of the affordable housing in Cambridge is studios and one-bedroom apartments, which totally excludes and marginalizes any kind of family,” said Sonia B. Kikeri, a graduate student at Brandeis and active member of the Cambridge chapter of Black Lives Matter. According to Kikeri, income requirements and wait lists often leave those seeking affordable housing homeless.

Wednesday's demonstration, which lasted about eight hours, featured several speakers and a presentation of four demands for Cambridge's elected officials. In addition to the 25 percent affordable housing mandate, protesters called for the City Council to use free land for public spaces and affordable housing instead of selling it to developers; establish a Rent-to-Own program; and allow MIT to further develop student on-campus housing in order to leave more space for affordable housing.

The crowd of about 30 protesters was largely made up of Cambridge residents. Two high school students chained themselves by the neck using bike locks, while two others attached themselves to the students. Some Harvard affiliates, including current undergraduates and several College alumni who had been involved in the Phillips Brooks House Association, also attended the demonstration, according to Noah R. Wagner ’18.

A speaker shares her experience of not being able to afford housing in Cambridge, making it difficult to get to work and earn a living. By Katherine L Borrazzo

Cambridge Mayor E. Denise Simmons, Vice Mayor Marc C. McGovern, and City Councillor Jan Devereux addressed the protesters on the steps of City Hall. In an interview, McGovern expressed a desire to change the city’s current affordable housing ordinance by the end of the calendar year.

“This isn’t a discussion that will go into next spring,” McGovern said. “I want to see as high a percentage as we can possibly get.”

In order to change the ordinance, the proposal will need votes from at least six of the nine members of the City Council. According to McGovern, five councillors have vocalized support for a 20 percent affordable housing quota. Kikeri said that the officials’ statement to the protesters emphasized the lengthy process involved in changing the housing policy.

“They’re committed to the process, that’s what they keep repeating,” Kikeri said. “And that’s fine, except that they also need to be doing things to expedite the process when it’s people’s lives at stake, or they need to be doing a parallel complementary temporary program to keep the integrity of Cambridge—otherwise, it’s just going to be housing for rich white people.”

The protest ended at about 2:30 p.m., when the four individuals chained to City Hall were arrested. The Cambridge chapter of Black Lives Matter is currently collecting donations for jail support.