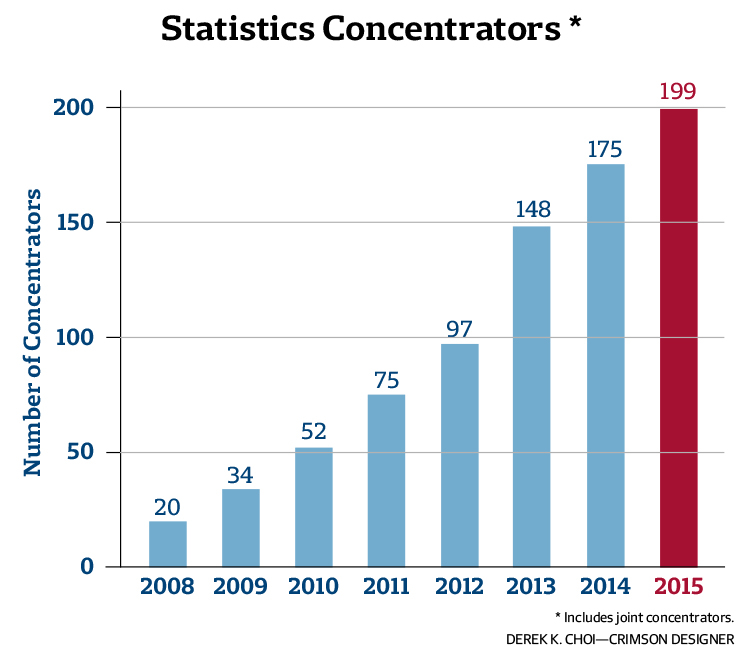 Expanding from just a handful of students to become one of the most popular concentrations in the College, the Statistics Department is clearly trending.

The department has gone from 17 concentrators in 2008 to 199 as of December 2015, according to the College Handbook and the Statistics Department’s internal records.

Joseph K. Blitzstein, co-director of undergraduate studies in Statistics, said he believes that both internal changes to make the department more appealing and global trends have been factors in the positive trajectory.

“I think in the last 10 years, the Harvard Statistics Department has put more effort into making sure our courses are inviting, accessible, and interesting,” Blitzstein said.

In particular, he highlighted changes to introductory statistics classes meant to increase the department’s draw.

Statistics 110: “Introduction to Probability,” which Blitzstein has taught nearly every year since 2006, has grown from 110 students in 2006 to 486 this fall—a number Blitzstein cited on Friday—making it the fifth most-popular course at the College this semester.

Blitzstein also highlighted global trends he said may factor into the growing popularity of statistics.

“The rise of data science has been a big thing worldwide,” Blitzstein said, noting the public acclaim received by statistics-driven media such as the best-selling book-turned-film “Moneyball,” as well as analyses conducted by data journalists such as Nate Silver, the founder of the FiveThirtyEight blog known for its election predictions.

It has been difficult for the Statistics Department to keep up with the rapid growth in concentrators, and the department currently has a shortage of professors, Blitzstein said.

“We’ve had to think about how to handle advising, and mentoring, and teaching, and doing the best we can with still having a small faculty size,” Blitzstein said.

Any potential growing pains do not appear to have hindered some current and former concentrators, who highlighted their positive experiences with the discipline.

Matthew T. DiSorbo ’17 switched his concentration from Economics to Statistics after taking Stat 110 his sophomore fall and becoming fascinated by how useful he found the discipline.

“It was very interesting, very applied, and also gelled with a lot of potential career paths,” DiSorbo said.

After he graduates, DiSorbo said he plans to go into finance but added that the possibilities for Statistics concentrators are many.

“I think Stat concentrators now have the world at their fingertips,” he said.

Michele S. Zemplenyi ’13, a former Statistics concentrator, said she values the flexibility of her past concentration as she moves beyond her time as an undergraduate. Following graduation, Zemplenyi took a job related to data analytics in business, and is now in her second year of a biostatistics Ph.D. program at the School of Public Health.

“What’s nice about statistics is that you don’t actually have to pick a statistics subject area right away because many of the tools that you learn as a Statistics concentrator can be applied to a number of areas,” Zemplenyi said.

Statistics already represents the eighth largest concentration in the College and the second largest in the FAS Science division, according to data provided by Statistics senior lecturer Michael I. Parzen. But Blitzstein said the department has even loftier aspirations for the future.

“I would like to see the department as a hub for data science and data analysis at Harvard,” Blitzstein said. “To have opportunities that could come from all over the Boston area or beyond for analyzing interesting data sets, [with us as] the experts for providing tools and knowledge needed for complicated modern data sets.”

A previous version of this article incorrectly identified the middle initial of Matthew T. DiSorbo ’17.