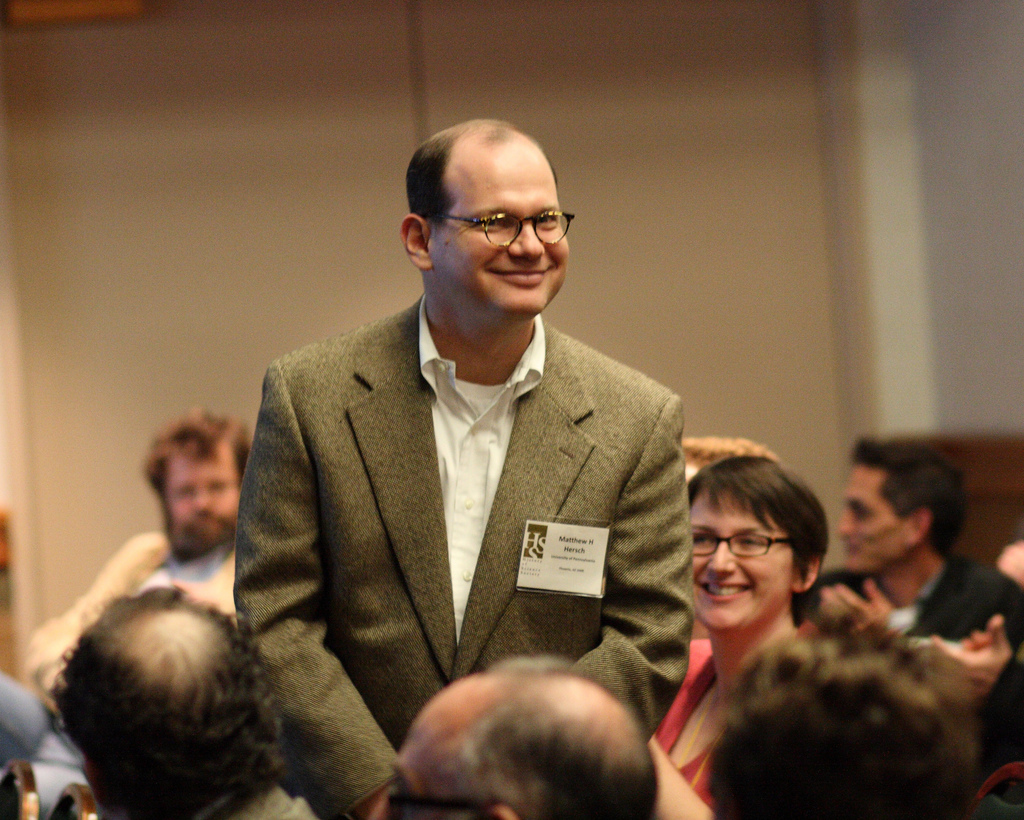 Knife-fighting and Cardboard Bazookas: A Conversation with Matthew Hersch

On the first day of class Hersch demonstrated how one might load a musket while riding a horse.
By Annie M. Goldsmith

“In the syllabus I have to declare quite categorically that any student who voluntarily engages in a knife fight in the course of the term will receive an F. That’s the only blanket grading rule that I have.”

Assistant Professor in the History of Science Matthew H. Hersch's office is filled with, among other things, a life-sized astronaut cut-out, a model spaceship, and a cardboard bazooka. His knife-fighting rule is based on his extensive knowledge of combat.

The knife-fighting stipulation appears in the syllabus of History of Science 182: “An American Way of War: Technology and Warfare,” which Hersch is teaching for the first time. The course is an atypical one for the Harvard course catalog, which seldom features offerings on the nuts and bolts of warfare.

“Courses on [technological history] should be part of the rich tapestry that is undergraduate education at Harvard,” says Hersch, who aims to provide an opportunity for students to learn about a topic highly relevant to real-world affairs.

The course has unconventional elements beyond its knife-fighting rules. On the first day of class, for instance, Hersch demonstrated how one might load a musket while riding a horse.

Hersch jokes that his hands-on approach does have its downsides.

“One of the problems associated with this course is that I keep acquiring things—like that helmet there,” he says, pointing to some camouflaged headgear on one of his many bookshelves, “and I have no place to put them.” Indeed, at the beginning of our chat, Hersch had to move a large model battleship off his desk in order to make space for some of my things.

Out of necessity, much of this military miscellanea consists of models as opposed to real weaponry.

“The Commonwealth of Massachusetts makes it extremely difficult for me, for very good reason, to use actual weapons in class for demonstrations,” he says, opening up a large trunk filled to the brim with mock weaponry made specially for the class.

Though the props are fun, Hersch uses them to relay a serious message. “The ships and the occasional hats and the costumes are very important aspects of our story for increasing memory retention and for illustrating points, but once I get students in the classroom, there are a lot of really meaty issues that we get to have an opportunity to discuss,” Hersch explains. “Nothing is ever as it seems.”

Hersch says facing these issues can even become “emotionally draining” by semester’s end.

“We’re forced in the course to often confront a lot of often very ugly things,” Hersch says. “I believe in national defense. I have always considered myself a patriot, but the business of defending yourself can be an ugly, difficult business.”

To that end, Hersch spends much of the course trying to “shed the romanticism and fantasies” of war. He emphasizes, among other subjects, the difficulties of marksmanship, the extreme discomfort of serving in a submarine, and the struggles of veterans reintegrating into everyday society after serving. “I like to confront these sort of mythologies, not because I don’t love our country, but because I love it as much as I do,” Hersch says. “I think one thing that makes our society terrific is the freedom and the willingness we have to truly know ourselves.”

History of Science 182 is just one of six new courses on the history of technology, with a focus on material culture, that Hersch is in the process of introducing. He is also helping develop a new concentration track entitled Technology, Information, and Society, which he hopes will “give people the opportunity to understand the technological world and make thoughtful and reasoned arguments about it.”

As for the knife fight? His first piece of advice is to “turn around and run the other way as fast as you possibly can,” but, if pushed, he does have a game plan. Sadly, though, he reserves those “secrets for people who take the class.”

“I guess you’ll just have to enroll,” he says.