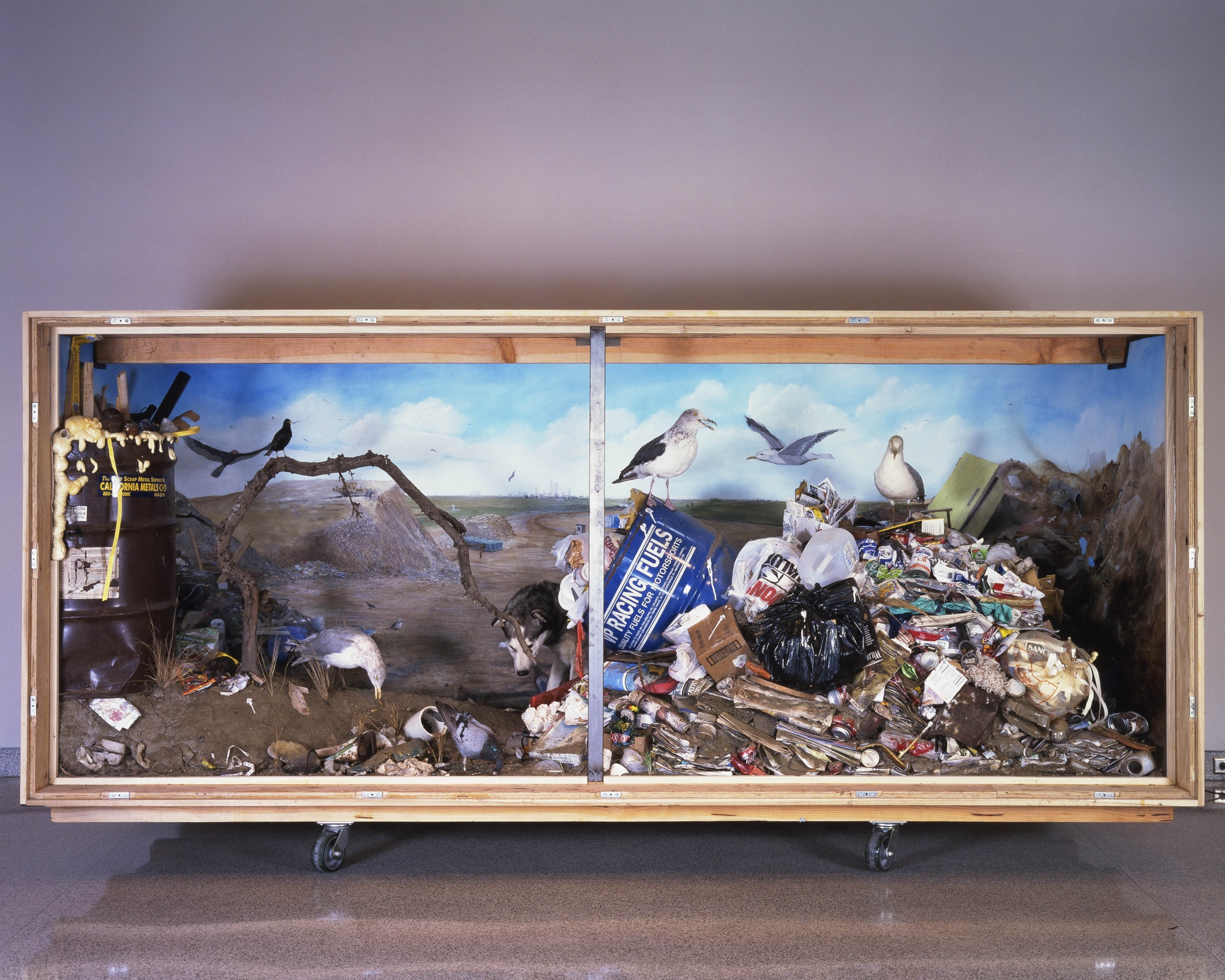 During Charles Darwin’s voyage on the H.M.S. Beagle, he realized that a supposed “ostrich” his shipmates had just shot, cooked, and eaten was a rare species of Rhea he had been searching for. He scrambled to collect the bones and managed to recreate the specimen for display in the Zoological Society. This story would likely resonate with artist Mark Dion, whose cluttered sculptures adopt the methods of the naturalist to comment on some of humans’ oblivious interactions with nature. The Institute of Contemporary Art organized 30 years of his art into the breathtakingly immersive survey “Mark Dion: Misadventures of a 21st-Century Naturalist.”

With a cynical twist on Darwin’s curiosity, he often seizes objects and specimens seen as trash and presents them, in cabinets and display cases, as worthy of close examination. The exhibit begins on a confusingly bright note. “Toys ‘R’ U.S. (When Dinosaurs Ruled the Earth)” is a recreation of a lively, familiar-feeling child’s bedroom in which every toy and clothing item is adorned with dinosaurs. Its portrayal of obsession is only slightly exaggerated. The underlying criticism of how we teach nature to children is not immediately apparent behind the bright colors, and the work begs a long, ultimately self-deprecating look from its viewers.

In “The Department of Marine Animal Identification of the City of San Francisco (Chinatown Division),” as in many of his works, Dion play-acts the role of a naturalist. His process recalls Darwin’s Rhea discovery—Dion collected fish from markets in San Francisco and worked to identify them using books. The artwork itself is a recreation of the environment in which he worked: his books on an overflowing desk and the fish specimens lined up in jars. In this artwork, he has realized and redefined a potential for naturalism in urban life.

Each work in the show contains infinite details to disgust and delight, and the journey into the rest of the massive exhibit both clarifies and complicates Dion’s views. The sharpest visual contrast from “Toys ‘R’ U.S.” comes in the unsettling “Killers Killed,” in which Dion covered taxidermied animals detested by civilizations with tar and hung their bodies from a tree, conjuring images of lynching. Another one of the most glaringly bleak sculptures is “Cabinet of Marine Debris,” which resembles a cabinet of beautiful ceramics from afar but is actually junk that he collected from the Great Pacific Garbage Patch.

Contrasting, or perhaps highlighting, the feeling of pessimism in the art is a wonder at nature that verges on hope. The museum invites visitors to step into an aviary entitled “The Library for the Birds of New York/The Library for the Birds of Massachusetts,” with live zebra finches and canaries fluttering above a tree lined with books on ornithology, which the birds have defecated on. It is at once mystically fairytale-like and gritty. Though delicate, the birds are presented with a power to ignore human intervention.

“Landfill,” too, portrays resilient animals. In a display case imitating those in natural history museums, taxidermied animals including a seagull and a pigeon appear to thrive among human waste. Like in “Toys ‘R’ U.S.,” every manufactured object refers to an animal, from Camel cigarettes to beef broth. However, the format of the museum display case once again emphasizes the impossibility of humans’ rectifying the environmental ruin they have caused.

In Dion’s work, no natural object is left untouched by a human hand, and images from nature pervade even the most consumerist aspects of civilization. 30 years of Dion’s art summarize a staggering range of emotional and intellectual reactions to this collision of worlds and preserve, before it can be discarded, a complicated moment in environmental history.