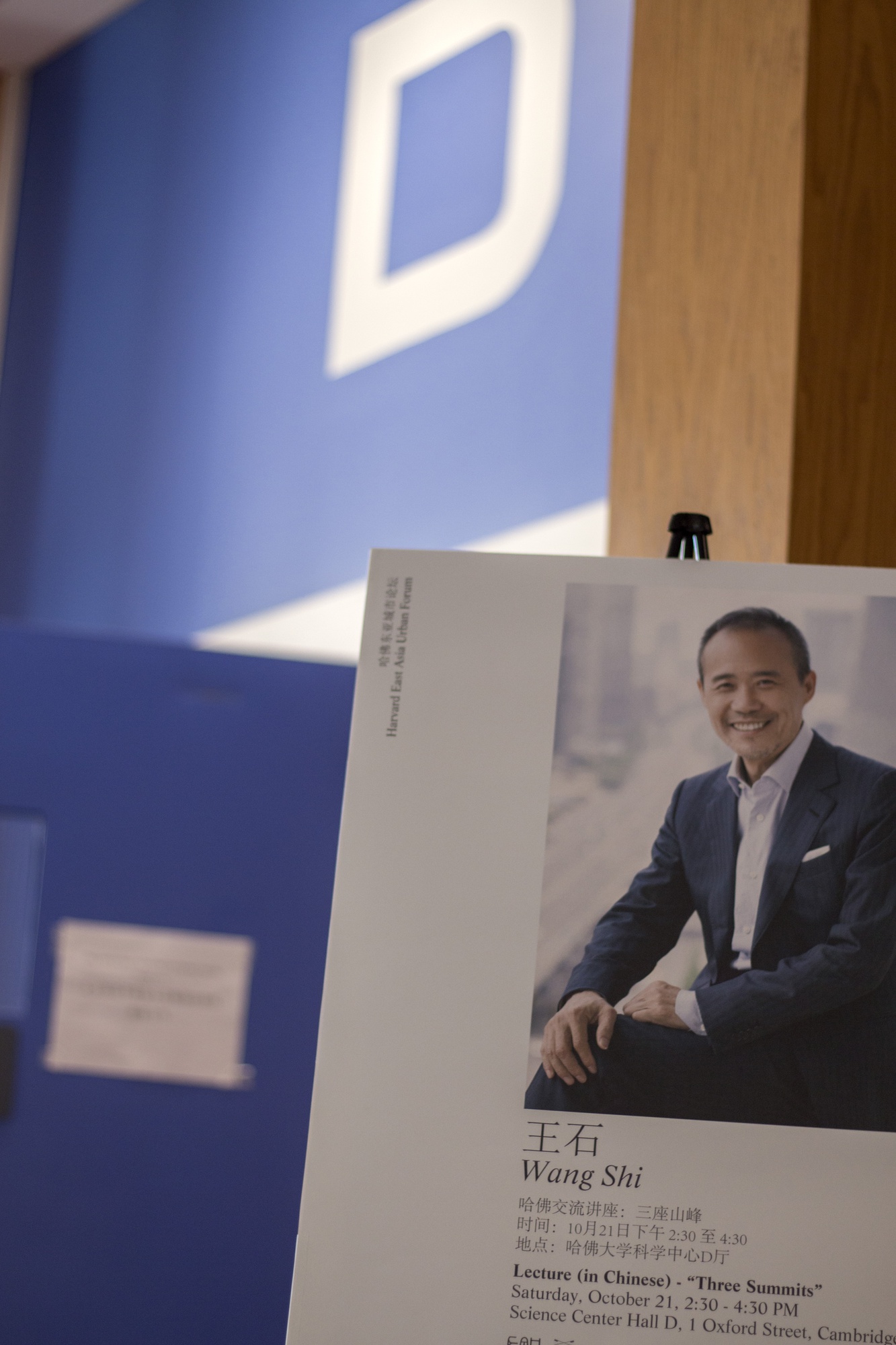 Chinese billionaire Wang Shi visited Harvard over the weekend, delivering a sold-out lecture in Mandarin Chinese about his experiences in business and academia.

More than 250 people turned out to Science Center Hall D for Saturday’s talk, which was organized by the Harvard East Asian Urban Forum of the Graduate School of Design. Wang is the founder of China Vanke, which is the largest real estate firm in China and was founded in 1984.

After announcing his resignation from Vanke’s chairmanship in June, Wang has been pursuing a growing interest in environmental issues and using his clout to spread environmental awareness within Chinese industry. Since stepping down, Wang has been invited to speak about his life at multiple venues in the United States, including Harvard. 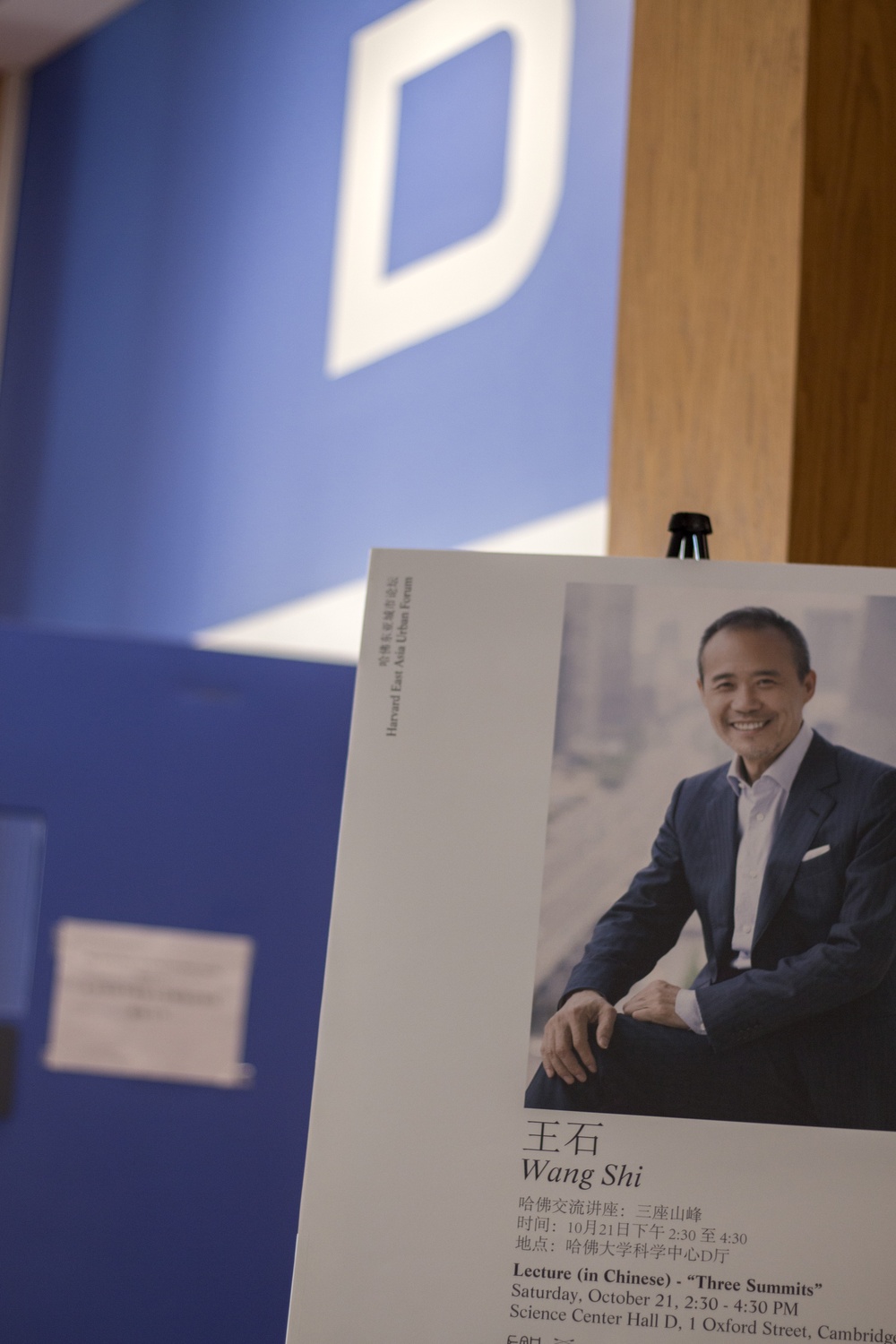 Qingnan Xie, a visiting fellow at the Law School, said in Chinese that she has long been familiar with Wang as “one of the Chinese business celebrities” and came to the event because of her interest in his entrepreneurial achievements.

“I am doing research on innovations in Chinese academia. Vanke represents a wave of newly-rising businesses based on accumulation of capital, and the real estate business is super lucrative in China. I also want to see what his expectations are of the Chinese market,” she said.

Lili Ouyang, a student at the Business School, visited Vanke with friends at HBS over the summer and said in Chinese that she was impressed by the way “they really value sustainability and are highly mission-driven, which sets them apart from other real-estate businesses.” Ouyang noted that several HBS students have interned at Vanke.

Wang spoke of studying at Harvard from 2011 to 2013, during which he attended classes primarily at the College. Wang said the experience was both challenging and academically rewarding.

“Harvard was my purgatory,” Wang said. “I started homework at 8 p.m, and never finished before 2 a.m… When I first arrived, I picked five courses. Quickly, I reduced those five courses to four, those four to three, those three to two.”

Most captivating to the audience were stories of his two climbs up Mt. Everest. Wang, who is 66 years old, holds the record for the oldest person ever to have accomplished “7+2,” climbing the highest peaks on all seven continents by 2004 and reaching the North and South Poles by 2005.

Wang also mentioned several near-death experiences while climbing. On a journey up Mt. Everest, the businessman temporarily lost eyesight in both of his eyes as oxygen levels diminished.

“I felt so comfortable, warm, and sweet—I couldn’t help but close my eyes. I felt that as long as I sat down, I would go to heaven,” Wang said. “Those who are trained for mountain climbing know you won’t return from such a beautiful experience. I still wanted to survive in this cruel world. But at that moment, it was very hard to continue to open my eyes and keep walking.”

During a visit to the South Pole, Wang also found a way to blend his interest in outdoor exploration with his growing commitment to environmental issues.

“We took off our clothes and stayed in the snow for 20 minutes, and posted pictures on social media. Just to show that the Pole is not as cold as people think.”

Wang, a rowing enthusiast serving a four-year term as Chairman of the Asian Rowing Association, was in Cambridge for the Head of the Charles Regatta.