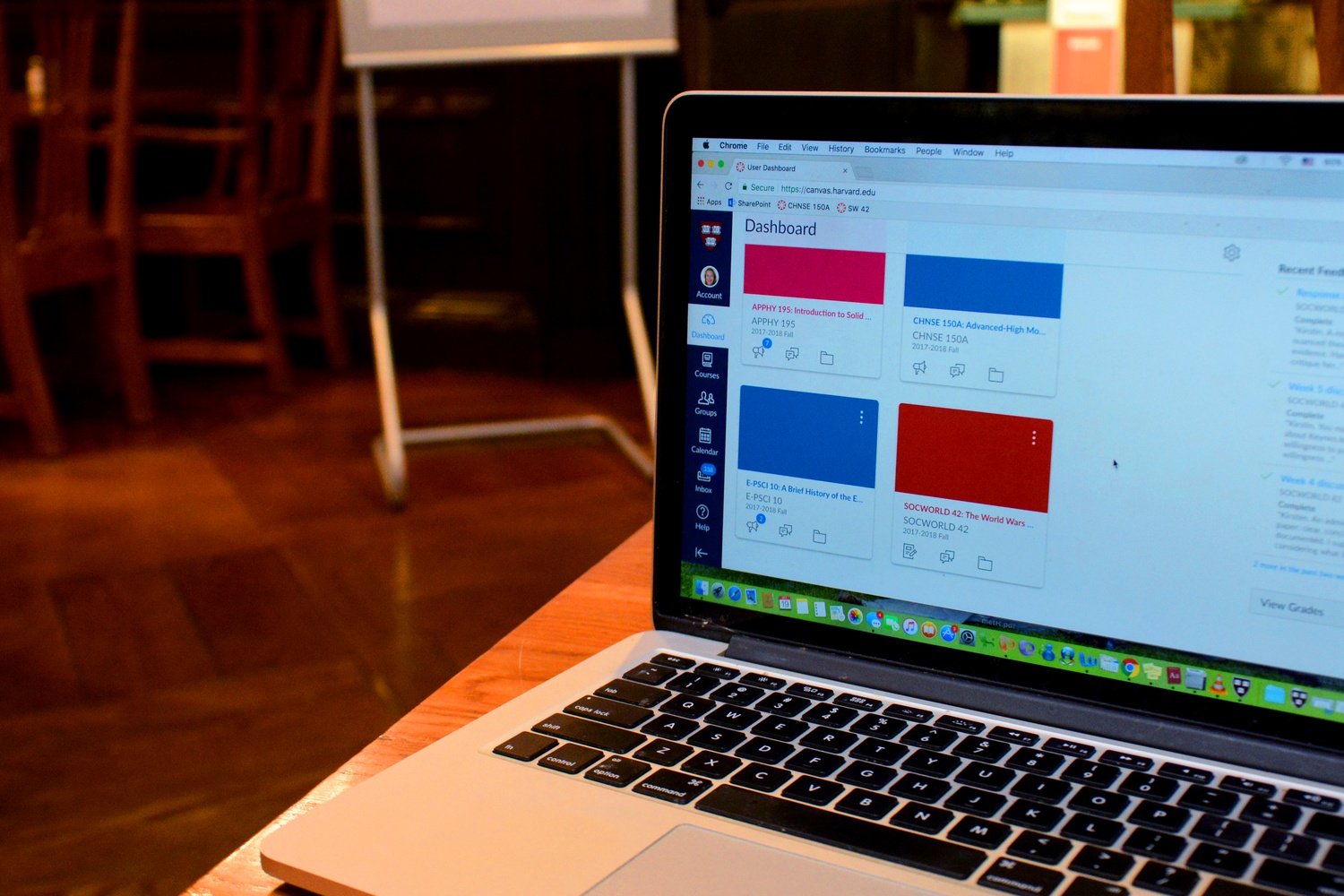 Course websites are hosted on the Canvas platform, which allows for the submission of homework assignments and the administration of quizzes and exams online. By Kirstin E. Anderson
By Edith M. Herwitz, Crimson Staff Writer

As midterm season wears on, some courses have altered the way they administer their assessments by integrating technology into traditional exam formats.

One course, Societies of the World 34: “The Caribbean: Globalization, Socio-Economic Development & Cultural Adaption,” used a one-hour online midterm that students could take at any point over a 24-hour period, according to Zachary R. Wehrwein one of the course’s teaching fellows.

Wehrwein said that the midterm was designed in this way to provide students with some flexibility of when it was most convenient to take it during this period.

“I felt less pressure about the test, because I could plan my day around when I wanted to take it and could make sure I had all my materials ready,” said Alexandra E. Summa ’20.

Some other students, including Christabel L. Narh ’18, said that they found the process of taking it online to be more stress-inducing.

“The timer was constantly there which made me more nervous, and that’s not necessarily the case for an hour exam in a lecture hall,” Narh said.

According to Wehrwein, this midterm exam was “an ‘open notes’ but not an ‘open peers’ test.” This means that students were able to consult their class materials, but had to take the test alone and could only submit their written work.

Wehrwein said that the midterm was meant to test the extent to which the students had read and understood the course’s readings and lectures material.

Some students, including Kiffen M. Loomis ’20, said that he would have preferred if the test were a more traditional format.

“I would have liked it to be in class for an hour because it relies more on what you know and not what you can find from your notes and copy and paste into the essay,” Loomis said.

Wehrwein added that the midterm was simply one way in which the course tests students’ knowledge.

“I am confident that we are going to be able to assess all students ability. This is one piece of the whole puzzle,” Wehrwein said.

Another course, Sociology 144: “Economic Sociology,” also allowed students to take the midterms on their personal computers but required students to do so in-class.

According to Chris S. Lee ’18, who is taking the course, students were allowed to have notes with them, but could only use material that was printed out and could not access any outside material.

Lee said that although he enjoyed being allowed to type the essays, he found it disruptive to keep referring back and forth to the papers.

“With all the notes on paper there was a lot of time figuring out where everything was and it felt rushed,” Lee said.

Narh added that she personally prefers writing in class essays by hand to writing them.

“Writing them by hand allows me to gather my thoughts and figure out what I want to say,” Narh said.

Wehrwein added that from an instructor's point of view, although Canvas allows instructors to set a time limit for any given assessment, the process for grading papers through the site is cumbersome.

“The site doesn’t have the option for detailed writing responses, which you would ideally have for a general education course,” he said.