Too Harvard To Fail

As Faust’s tenure draws to a close, some donors, alumni, and industry experts say Harvard should choose a leader with a healthy Rolodex and financial acumen.
By Dianne Lee and Michael E. Xie 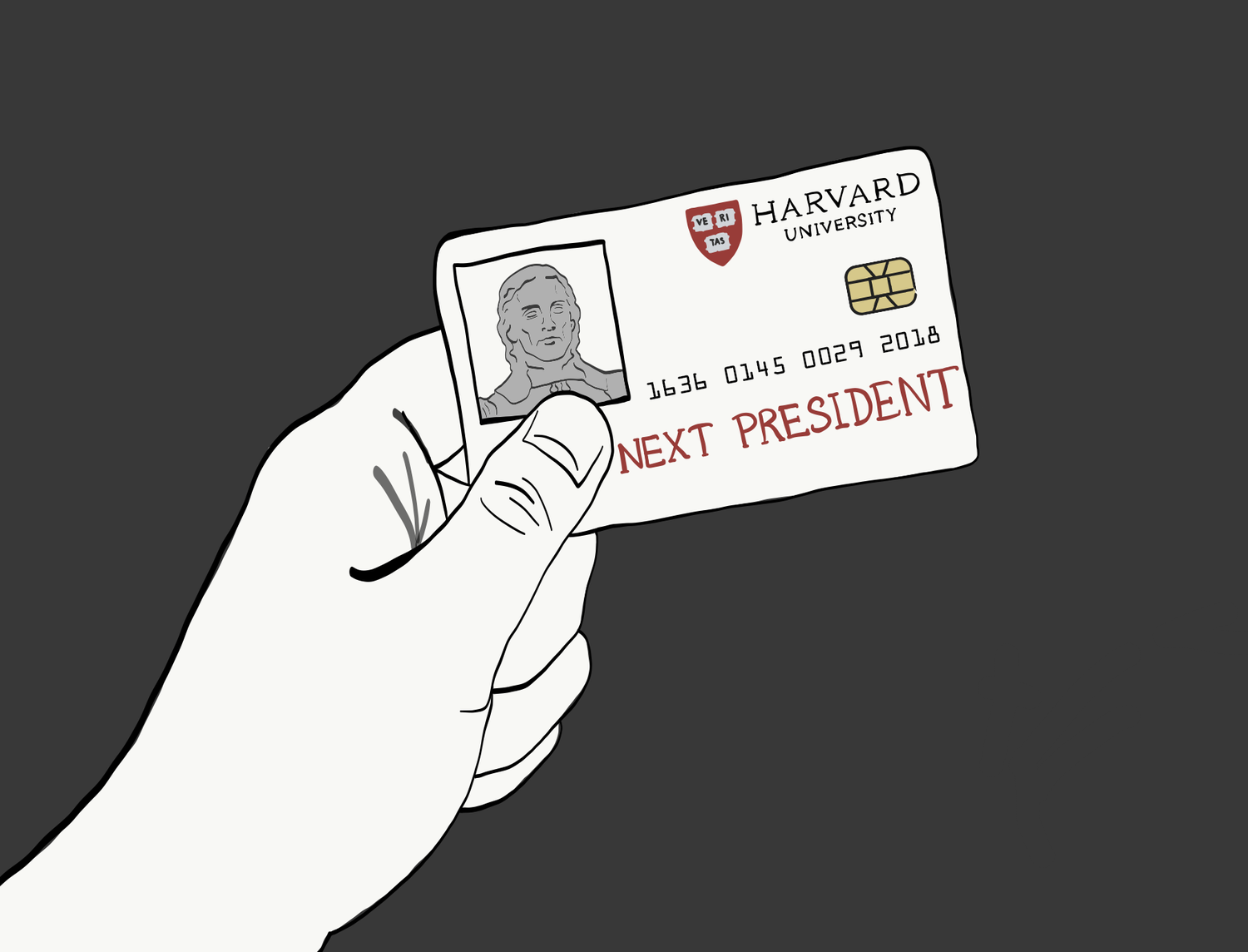 Princeton may be more highly ranked, and Stanford more selective, but Harvard has long held tight to the one title that some say matters most: world’s wealthiest university.

Harvard’s $37.1 billion endowment is larger than half the world’s economies. If Harvard were a person, it would be the world’s fifteenth richest.

With its assets comes more than just bragging rights: Harvard uses its endowment to attract the world’s best scholars, fund cutting-edge research, and support all the vital functions of the university, from libraries to financial aid. In many ways, according to longtime donor Paul J. Zofnass ’69, Harvard is able to remain on top in the increasingly crowded higher education market because of its unparalleled wealth.

“The prestige doesn’t last forever. Fortunately, the prestige of Harvard has been lasting 350 or 380 years, but it’s not guaranteed,” Zofnass said. “You can’t maintain the number one position without being financially successful.”

The University grows its wealth in two main ways. First, it solicits donations from alumni and other philanthropists across the globe. Then, it invests those gifts in a variety of financial markets to further build the endowment.

On the first point, Harvard has long excelled. The University bears the name of donor John Harvard, who gave 779 pounds and his book collection to the fledgling school back in 1638. And over the intervening centuries, the donations haven’t stopped: University President Drew G. Faust has overseen Harvard’s most successful capital campaign to date, taking in over $8 billion and smashing higher education records.

But on the second point, Harvard has floundered, turning in consistently “disappointing” endowment returns with material consequences across the University. Harvard Management Company, the University’s investment arm tasked with growing the endowment, has been forced to undergo some institutional soul-searching after years of falling behind peer institutions: This year, the gap between Harvard’s and Yale’s endowments narrowed to within $10 billion.

On top of it all, threats to federal funding, sometimes-fraught alumni relations, and mushrooming costs have led some to worry that Harvard’s financial dominance may be on increasingly fragile ground.

As Faust’s tenure draws to a close and the University looks to choose its next president, some donors, alumni, and industry experts say Harvard should choose a leader with a healthy Rolodex and financial acumen.

“Things change very fast in the world today, and not that money absolutely can buy everything and solve all problems, but I can say that without capital, you’ve got a real tough challenge,” Zofnass said.

'An Insatiable Appetite for Money'

Bok, who was Harvard's president from 1971 until 1991 and once again on an interim basis in 2006 and 2007, was initially reluctant to accept the presidency—“I don’t like fundraising and wouldn’t be any good at it,” he recalled saying. But the reply came: “If you lead Harvard properly, the fundraising will take care of itself.”

“That was a bit of an exaggeration then, but no one with a straight face would dream of making a statement like that to any college president today,” Bok said. “Fundraising—not just at Harvard but everywhere—has become a major preoccupation of time, and an absolute necessity in order to keep universities operating and functioning well.”

The immense infrastructure devoted to fundraising at Harvard today is reflected in the University’s yearly financials. According to Bok, when he took office in 1971, Harvard brought in about $50 million at most in annual donations. This past fiscal year alone, the University collected $1.3 billion in total gifts. Over the course of the campaign, the University has also started renaming schools in the honor of mammoth donations, most recently after John A. Paulson donated $400 million to rename the School of Engineering and Applied Sciences in 2015.

To raise billions in the “One Harvard” campaign, Faust travelled the globe, hobnobbing with alumni and courting donors to fund projects like the School of Engineering and Applied Sciences campus in Allston and undergraduate House renewal. With the campaign drawing to a close and those buckets still unfilled, donors and experts say fundraising will not—and cannot—stop after Faust’s departure.

“The University has an insatiable appetite for money,” said frequent donor Mitchell L. Dong ’75. “They could raise ten times more and still put it to good use. So they shouldn’t stop.”

Beyond unfinished projects, some donors also said they were concerned about the federal funding cuts proposed by President Donald Trump’s administration—Trump has suggested significant cuts to the National Institutes of Health and proposed to eliminate funding for for the National Endowments for the Arts and Humanities altogether.

“As you know, we have a lot of turmoil in the relationship between the government and education,” said Anthony M. Lamport ’57, a longstanding donor. “That’s a real challenge.”

To keep the donations rolling in, some say soliciting gifts will constitute a significant part of the next University president’s day-to-day. Philippe G. Hills, president of financial consulting firm Marts & Lundy, said Harvard’s next leader would need experience in fundraising—“the more the better.”

“If we look around the country right now, university presidents are spending 25, 30 percent of their time doing fundraising,” Hills said. “They need to feel comfortable doing it, and they need to be able to talk about what the vision and future of the institution is going to be so people will make those gifts.”

More broadly, many experts and donors also cited the importance of alumni relations to the University’s fundraising efforts. Lamport, who has given to House renewal and financial aid, agreed that fundraising is now “part of the job.”

“Meeting with fundraisers is something that makes [donors] feel secure and wanted and desirous of giving funds to Harvard,” Lamport said.

“You need to have somebody who’s very good at working with alumni, government funders, foundations, and so forth,” agreed David L. Yermack ’85, a finance professor at New York University. “Whoever becomes the new president is going to spend most of their time raising money and cultivating donor relationships.”

But Tim J. Keating ’85, president of Keating Wealth Management, said that the University’s next president could face an “alienated” alumni base after the College’s crackdown on single-gender final clubs, to which some alumni belonged and fondly remember.

“The position on final clubs is considered to be outrageous by many older alumni, an attack on something that was near and dear to them,” Keating said. “These are the people who actually write the checks to Harvard, the alumni.”

Still, while most agreed that fundraising will be an important responsibility for the incoming president, many said it wasn’t the most important quality they’d like to see in the next leader of the University.

Financing for the Future

Raising the money is one matter. But investing it to fund the University in perpetuity, experts say, is entirely another.

Even as the University continues to rake in donations from alumni, Harvard’s investment arm has struggled to make those gifts multiply. This fiscal year, Harvard’s endowment returns were the worst in the Ivy League; the year before, they hit their lowest level since the nadir of the financial crisis. Some experts even fear that the gains University has made in its capital campaign have been swallowed by investment losses.

“The unfortunate thing is that the money being raised in the latest campaign is basically making up for the shortfall in investment performance in the endowment,” Yermack said. “It’s not the way they’re making the pitch in the campaign, but that’s clearly what is going on here.”

Because Harvard’s schools are all, to an extent, dependent on the endowment for their operating costs, meager returns mean budget constraints. Though Faust has said that endowment payouts will be stabilized for the next few years to provide a cushion for her successor, some say Harvard’s next leader should have the skills to lead the University to a healthier financial state.

But according to some financial experts, that doesn’t necessarily mean a president in the mold of former Treasury Secretary Lawrence H. Summers, who preceded Faust in the role.

The next University President will enter the role in the midst of a transitional period for HMC. Last year, the firm hired its fourth CEO in a decade, former Columbia endowment head N.P. “Narv” Narvekar. So far, Narvekar has already initiated drastic changes at HMC, moving to lay off a majority of its employees and outsource its traditionally in-house investment team.

As HMC begins this transition, Yermack and Brad R. Balter, managing partner of Balter Capital Management, said the best thing for Harvard’s next leader to do may simply be to give Narvekar some space.

“I’d like to think that given the amount of effort it takes to change out the [CEO of HMC] at an institution like Harvard… that the new president would say, ‘Look, I know you’re relatively new too. Do your thing.’ That would be the logical move,” Balter said.

In any case, between fundraising and overseeing the financials, Bok said the role of the Harvard president has come to resemble more that of a corporate executive than an academic leader.

“The administrative part of the job has become vastly greater, and it’s become harder then to pay attention to the educational side, because there’s so much administration and fundraising that has to be done,” he said. “It’s just an immense difference—the scale of the whole operation.”