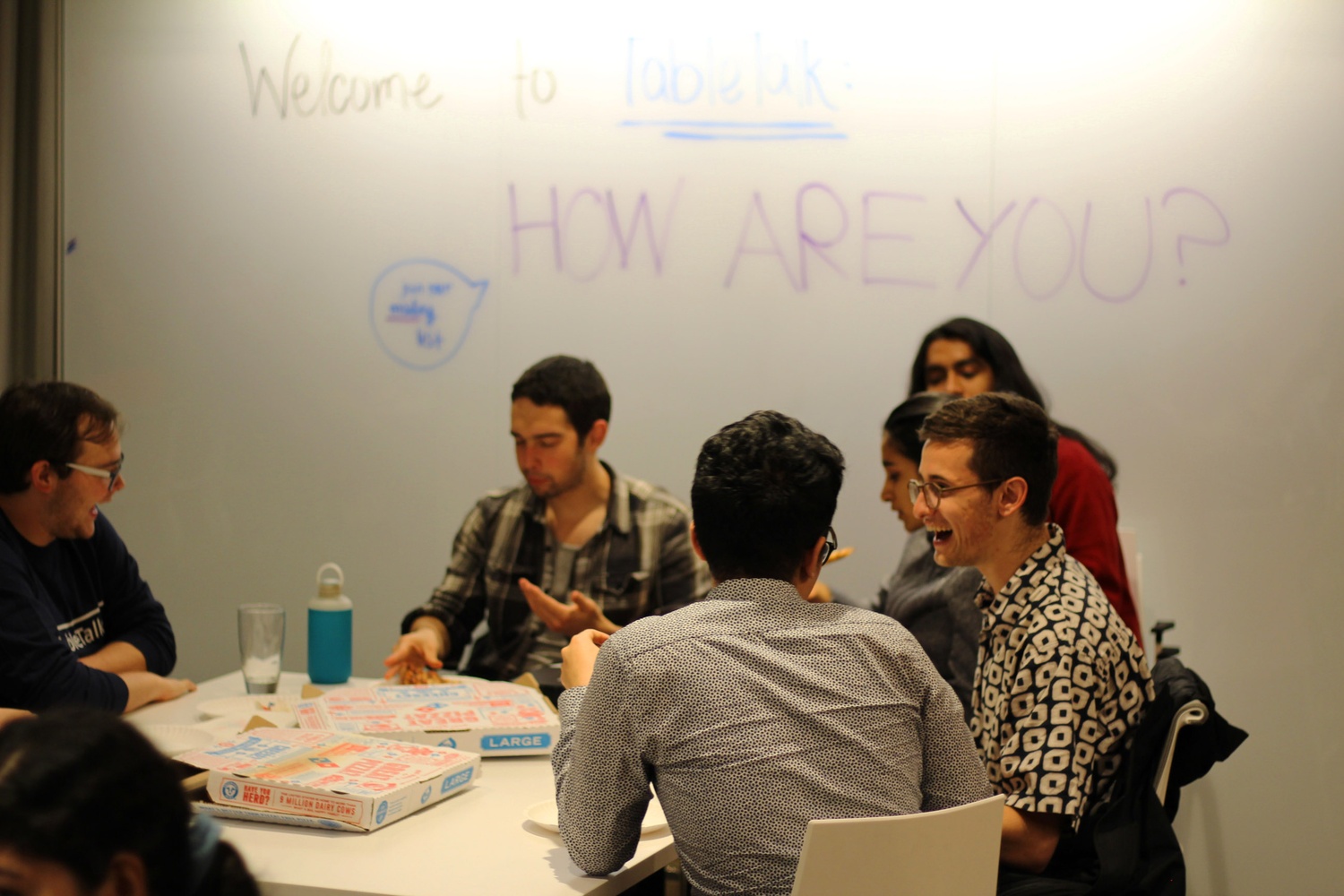 Students gather around pizza to discuss the significance of the question “how are you?” at TableTalk Harvard’s first event Monday night. By Margaret F. Ross
By Molly C. McCafferty, Crimson Staff Writer

Members of Harvard’s new "Table Talk" initiative spent upwards of an hour in extensive conversations sparked by the question "how are you?" Monday evening.

Founded by students at Emory University, Table Talk is an initiative with branches at several colleges whose mission is to bring people together in innovative ways, according to the group’s website.

Amitai B. Abouzaglo ’20, one of the founders of Table Talk at Harvard, explained that he and Salma Abdelrahman ’20 started the chapter last year in the wake of the divisive presidential election, seeking to foster camaraderie on campus.

“We were thinking about this idea for giving people spaces for listening to one another and converging on shared interests and having a space where people could feel welcomed,” Abouzaglo said in an interview.

On Monday night, the topics ranged from the best time of day to take naps to a lack of fulfilling interpersonal relationships on campus, with freshmen and returning members mixed together around square tables.

Last spring, the group held two social functions that, like Monday’s event, were designed for students to engage in substantive dialogue. They focused on transitioning from home to campus and was hosted in partnership learning to cope with Harvard’s high-stress environment.

“How are you?” was Table Talk’s first event of this school year. Abouzaglo said it was designed to open up the way students address each other, breaking the “icy” barrier between students on a campus where an “atmosphere of doing” permeates everyday life.

“When you're rushing from one place to the next, you can't get a real conversation in,” he said.

Students ate pizza in the Memorial Church Oasis as Abouzaglo and his co-organizer Shireen Younus ’20 moved from table to table, joining small groups and taking in the conversations. Associate Dean of Students for Diversity and Inclusion Roland S. Davis also participated in one of the discussions.

Younus, an active Crimson editorial editor, said that the deep, meaningful conversations at events like “How are you?” show that Table Talk is accomplishing its mission.

“You can see that we have a really specific framework on how we want to achieve this,” Younus said. “It is very simple, it is really doable: bringing people together around a meal, around food, around a table, to talk about something that matters to them.”

In the future, Abouzaglo says he aims to spread Table Talk’s initiatives across campus and unite students, faculty, and offices that share similar goals with the organization. Specifically, he hopes that Table Talk can form a strong collaborative relationship with the Freshman Dean’s Office, a process that Table Talk organizers say they have already begun.

For now, they are starting with a simple introduction. One participant, Alden E.J. Fossett ’21, said the conversations on Monday night were both enjoyable and constructive.

“I think that it’s a great idea, and I’m happy to support Amitai in his endeavors to create a more inclusive social space at Harvard,” Fossett said.