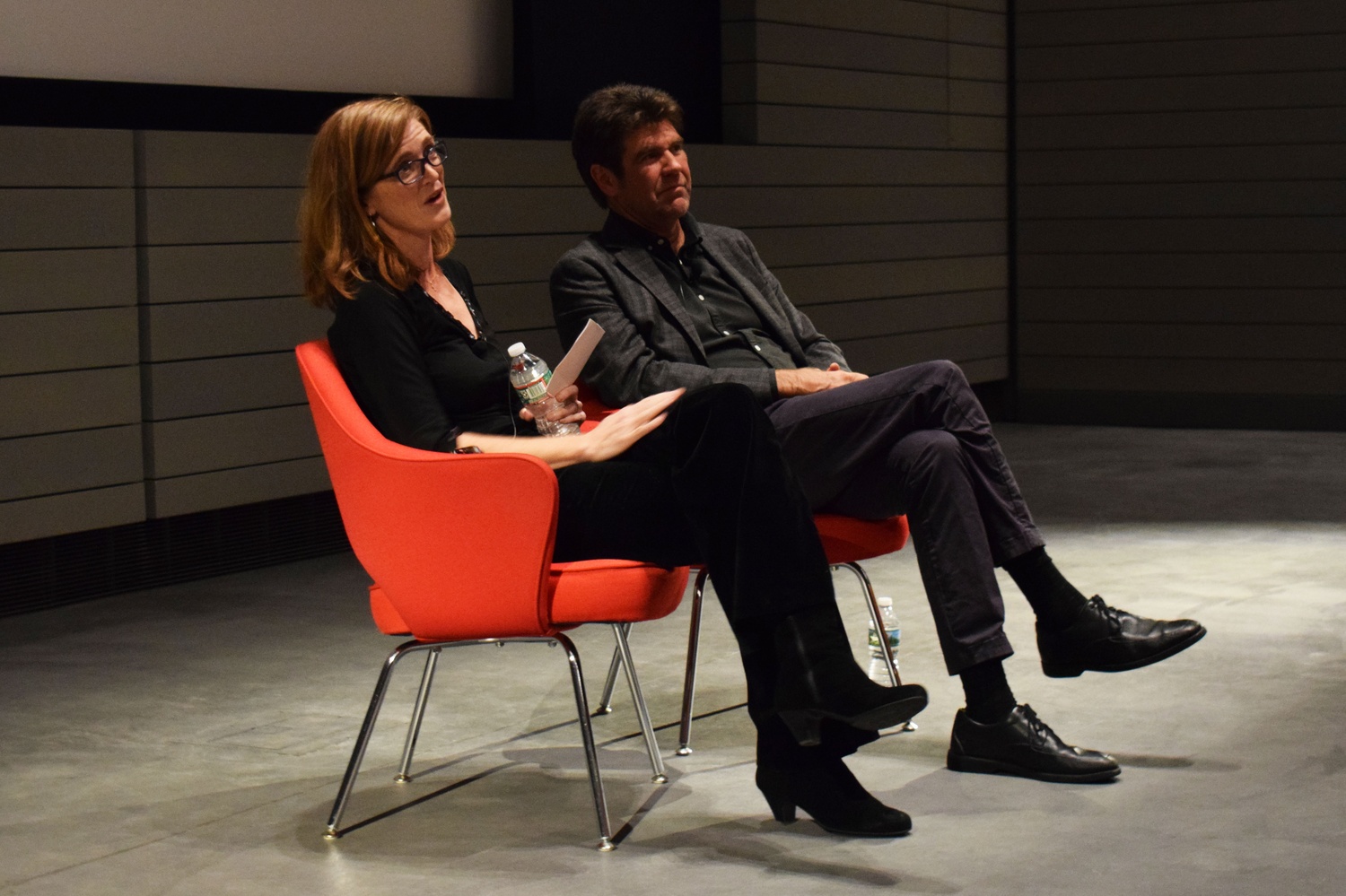 Greg Barker, director of “The Final Year,” talks to former United States Ambassador to the United Nations Samantha Power after a screening of the film in the Harvard Art Museum. By Ellis J. Yeo
By Molly C. McCafferty and Cindy H. Zhang, Contributing Writers

Standing in front of a packed room of faculty, students, and public officials, documentary filmmaker Greg Barker told the crowd that, for the next 90 minutes, Donald Trump would not be president.

Barker was speaking at an advance screening of his documentary “The Final Year"—which chronicles foreign policy initiatives in the last year of Barack Obama’s presidential administration—at the Harvard Art Museums on Wednesday night. The screening was followed by a question-and-answer session with Barker and former United Nations ambassador Samantha J. Power.

The documentary, set to be released on Jan. 19, 2018, follows Obama and several of his senior officials, including Power, who is currently a professor of global leadership and public policy at the Harvard Kennedy School and professor of practice at the Harvard Law School.

The film also relates the day-to-day lives and dealings of former Secretary of State John F. Kerry and Obama’s speechwriter and advisor Benjamin J. Rhodes as they attempt to implement lasting change in the final year of Obama’s tenure as president, following them from United Nations summits and White House meetings to field work in Syria and Cameroon. The movie also touches upon the tumultuous 2016 presidential election.

“For me, watching this film is more about seeing what happens inside the White House and seeing how day-to-day tasks are being affected at such a high level and it was truly inspirational,” Harvard Extension School student Kumail Ali said. “After watching this film I’m continuing to be more inspired to do the work that I’m doing, to be a young and aspiring politician.”

Though Barker joked that the audience could ignore the Trump presidency during the documentary screening, a significant portion of the subsequent question-and-answer session focused on the current president. In its foreshadowing of the 2016 election, Power described the film as “a horror movie where the audience knows that a massacre is going to happen.”

Both Barker and Power said they hope the film will not just evoke nostalgia for Obama’s presidency, but also fuel activism.

“We need to draw people into public service and government,” Power said. She also encouraged young people and Harvard students to consider entering the foreign service.

Some audience members, such as Radcliffe Fellow Zia Haider Rahman, said they felt the film achieved these goals.

“I thought it was fantastic. I think this movie is a rousing call to arms; it’s an invitation to do something, it’s a reassurance that something can be done,” Haider Rahman said.