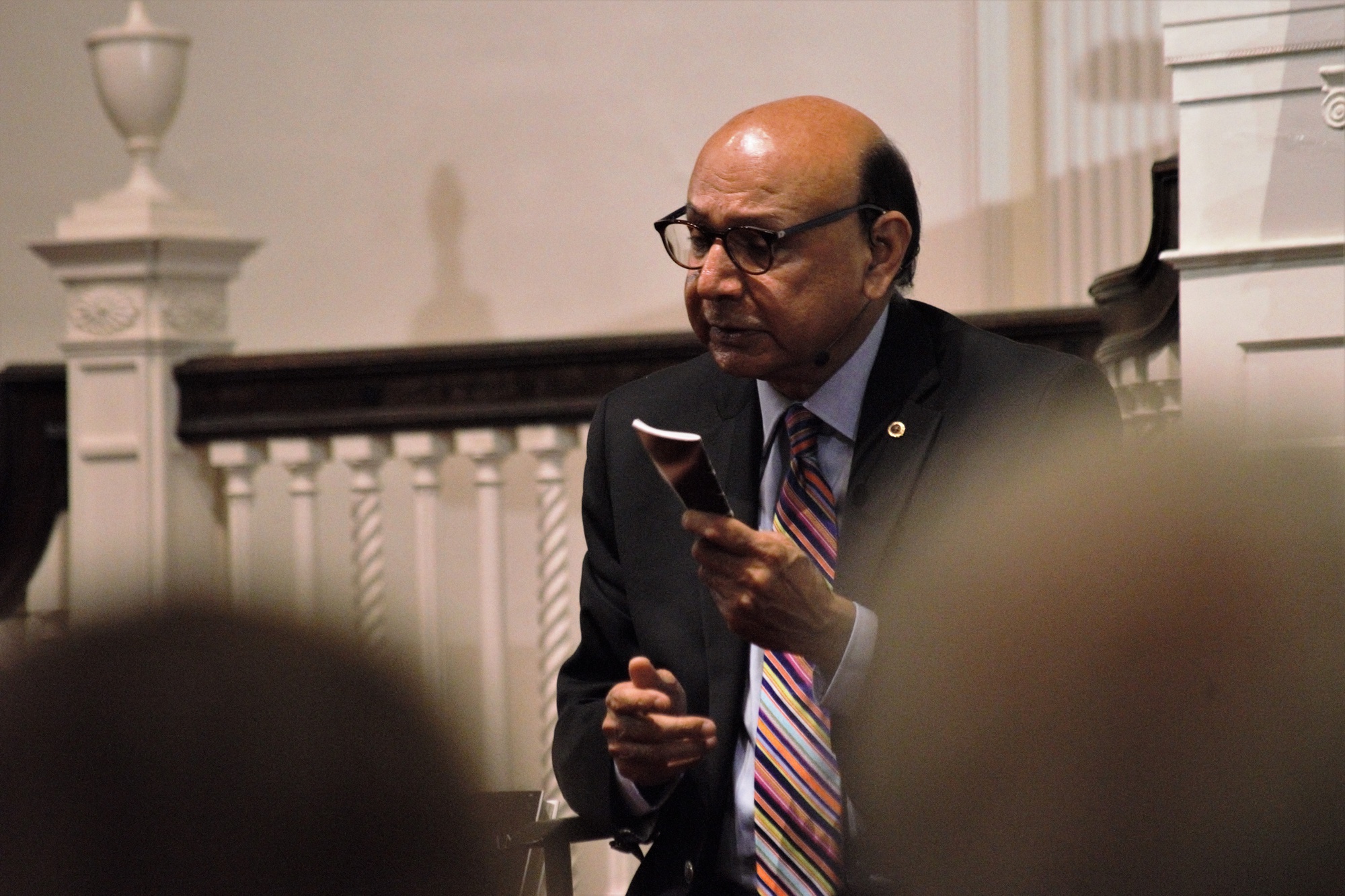 On Monday, Nov. 6, Khizr Khan promoted his new book, “An American Family: A Memoir of Hope and Sacrifice,” at First Parish Church in Harvard Square. Khan, a Pakistani-American lawyer and Gold Star father, is best known for denouncing then-presidential candidate Donald Trump in a rousing speech at the 2016 Democratic National Convention. Khan discussed the contents of his memoir with Harvard Law School professor Martha Minow before taking questions from the audience. A skilled raconteur, Khan captivated event-goers with reflections on his early reverence of the United States, the events leading up to his famed speech, and the upstanding character of his late son Captain Humayun Khan.

Khizr Khan recalled being first exposed to the founding documents of the United States as a University of Punjab law student in 1972. Living under martial law in Pakistan, he dared not even step outside without the consent of the authoritarian state. As a result, he was intrigued by the language of the Declaration of Independence. “I thought, who declares independence? Independence is given,” Khan recounted. Until reading the Declaration of Independence, Khan had understood independence as something granted at the discretion of a colonial power following the complete exhaustion of a region’s resources. To declare one’s own independence seemed to be the mark of an exceptionally advanced nation. “I fell in love with the Declaration of Independence first,” he explained, “then the Constitution, and then the Bill of Rights… Rule of law [and] equal protection of law [have] elevated this nation to a place where it has become an aspiration for the rest of the world.”

From there, Khan recounted, his admiration for the United States only grew. In addition to the beauty of its founding documents, Khan was struck by the kindness of the country’s citizens. After moving from Pakistan to Dubai, Khan could only afford to rent a small room in which he slept on the floor. But his American boss, who noticed his exhaustion, offered him free lodging in a furnished apartment meant for Western expatriates. “Every time I think of that moment, I lose my composure,” Khan admitted. “He owed me nothing.” Khan developed a connection to America that was both intellectual and emotional. His opinion of the country did not diminish after his immigration in 1980. Even getting a driver’s license from the DMV reaffirmed his faith in American rule of law: “Everyone had to come through the door, get a number, and wait. That was so impressive, because where I come from, there are classes of people. [In America] the human being is raised up to a level of dignity that the rest of mankind wishes to have.”

Reflecting on the nationwide resurgence of white supremacy, Khan maintained his hopeful outlook. Though horrified by the violent far-right rally that ravaged his new hometown of Charlottesville, Virginia this summer, he was heartened by the response of those who stood united against bigotry. He was moved in particular by the tens of thousands of Bostonians who flocked to the streets to demonstrate against racial hatred.

Khan’s love for America does not translate, however, to acceptance of the Trump administration. “We have every right to criticize the White House when they show incompetency,” he said. “Those are our tax dollars [at work].” Khan went on to condemn Donald Trump for his response to the recent killing of four American soldiers in Niger. He also criticized White House chief of staff John Kelly, himself a Gold Star father, for failing to advise Trump of the proper way to express his condolences to the soldiers’ families: “[John Kelly] knows better than anyone else what is required at that moment … his obligation [was] to restrain the president from using that moment for political expediency.”

During his question and answer session, Khan was confronted by an audience member who accused him of supporting a war criminal and being a pawn for the Democratic Party. Khan gave his earnest opinion on the American invasion of Iraq. Although he had personally opposed both Gulf Wars, he wanted to honor his son for his service and sacrifice. Khan’s response to the latter accusation was measured but unambiguous. “I wrote that speech,” he said. “I’m an articulate person.” He went on to describe staying up all night to write a twelve-page draft of his speech, which his wife Ghazala helped him shorten to 260 words. “The very first line of the original speech … was ‘These are my words. I have not plagiarized from Michelle Obama,’” Khan quipped, referring to Melania Trump’s 2016 Republican National Convention speech, which had marked similarities to a 2008 speech by Michelle Obama.

Several audience members, including Blessing H. Jee ’17-18, reported that Khan’s event had reaffirmed their confidence in the United States. “I think it was just very invigorating to hear [about] Khizr Khan’s love for the Constitution,” she said. “[The Constitution is] something that I take for granted or don’t really think about … in my day-to-day [life], but this definitely has made me appreciate more the kind of state under which I live, even if sometimes the political realities feel so horrible.”

Sathvik Sudireddy ’19, who attended the event with several other members of the Harvard South Asian Association, expressed a similar sentiment. “I think the way Khizr Khan was raised is very similar to a lot of the ways many parents of South Asians here have been raised. … Seeing that example of what he did … reminds us of our parents, and the story of his son … reminds us of why we’re here and what our duty is to this nation.”

Carissa J. Chen ’21, another audience member, was also impressed by the event. “I remember listening to [Khan’s] speech [at the Democratic National Convention] last year and being really moved by what he said … I’m really glad I came,” she said.