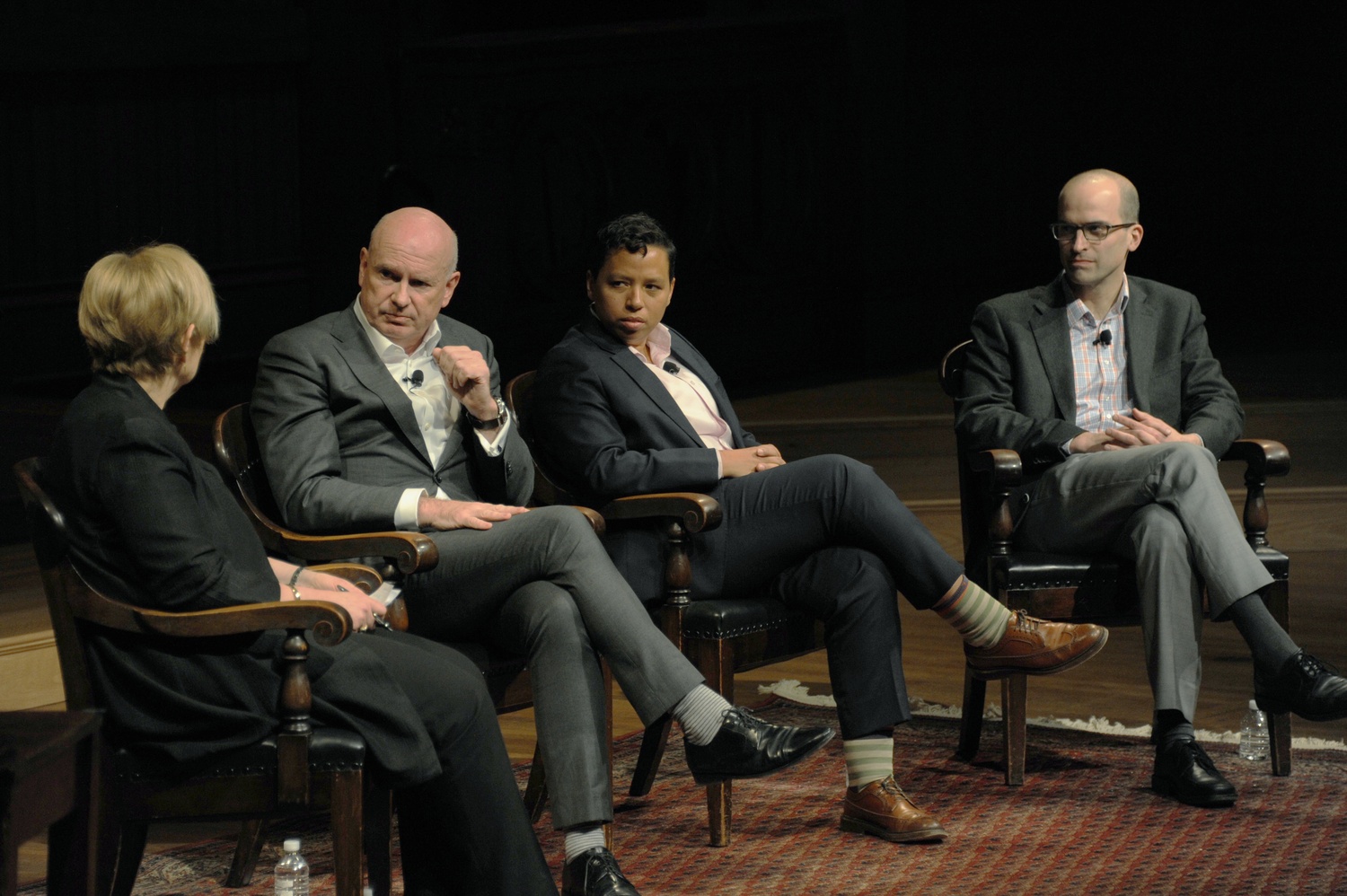 Panelists Gerard Baker of the Wall Street Journal, Lydia Polgreen of the Huffington Post, and David Leonhardt of the New York Times discuss the media’s coverage of President Donald Trump and the further role of the journalism in a “post-truth era" in a conversation moderated by Ann Marie Lipinski in Sanders Theater. By Derek G. Xiao
By Claire E. Parker and Leah S. Yared, Crimson Staff Writers

University President Drew G. Faust convened a panel of some of the country’s most prominent journalists to discuss the industry’s future in Sanders Theatre Tuesday, five days after President Donald Trump referred to the media as the “opposition party.”

Journalists and Harvard affiliates packed Sanders for the event, titled “The Future of News: Journalism in a Post-Truth Era” and co-sponsored by the Shorenstein Center on Media, Politics, and Public Policy and the Nieman Foundation for Journalism. Featured journalists took an introspective look at the purpose of their work and the obligations of journalists in the age of Trump.

In her opening address, Faust emphasized the need for universities and journalists to continue the “pursuit of truth,” calling this mission a “subject of greatest urgency.”

“Like journalists, we regard facts as the necessary foundation for human decision-making and human progress,” Faust said. “Yet we now confront what has been called a post-truth era.”

Much of the panel's discussion focused on word choices media outlets make to characterize Trump’s policies and public statements, specifically whether or not publications should label Trump’s false claims as “lies.” Leonhardt argued that the media should use the term “lie” conservatively, as opposed to words like “untruth” or “falsehood.”

“I think the key is to remember that if you are putting the falsehood out there, and then saying in the six paragraphs that it’s false, you’re not doing your job,” Leonhardt said.

Baker responded to questions about a recent email to Wall Street Journal editors in which he challenged their use of the phrase “Muslim majority countries” in stories about Trump’s 90-day ban on immigration from Iran, Iraq, Libya, Sudan, Syria, Somalia, and Yemen. During the panel, Baker said he did not specifically forbid the phrase, but requested that his reporters provide additional context in their stories.

The panelists also discussed the divide between the media and the audiences they seek to serve in an often self-critical examination of their own publications’ reach and the place of the media in American society.

“I actually think that what we're seeing right now is a collapse of empathy in journalism,” Polgreen said. “I feel as though journalism has become a highly elite profession that feels extremely distant from the experiences of the people that we write about.”

Baker argued that the distance stems from a cultural gap between many journalists who largely live in cities and attend elite universities—including Ivy League institutions like Harvard—and Trump supporters in other parts of the country.

But panelists said they remained optimistic about the journalism’s future, particularly as social media continues to make journalism more accessible and participatory for readers around the world.

“There really are some positives from this,” Leonhardt said. “You have your own printing press.”

A number of journalists spoke before and after the panel, including Lolly Bowean of the Chicago Tribune, William Kristol ’73 of The Weekly Standard, Kathleen Kingsbury of The Boston Globe, and Brian Stelter of CNN.

In a call to action, Stelter concluded the event by proclaiming that this is a critical moment for journalists everywhere.

“This is it. This is the time journalists live for,” Stelter said. “It’s only a post-truth world if we all in this room let it be.”