Harvard's student unionization effort is going to an NLRB hearing today. Here's a guide to who’s involved, what’s happened so far, and what’s at stake.
By Caroline S. Engelmayer and Phelan Yu

Eligible Harvard students voted on whether or not to unionize in November. The vote was too close to call, and the NLRB will hold a hearing that could determine the election's outcome Wednesday. By Timothy R. O'Meara

On Feb. 22, the National Labor Relations Board will hold a hearing that could determine whether eligible students at Harvard can form a union. In November, Harvard was one of the first private universities in the country to hold a student unionization election.

Who is forming a union and why?

Graduate student unions already exist at some public universities, and in 2015 some graduate students at Harvard, calling themselves the Harvard Graduate Student Union, started working towards creating an official union of their own. Union organizers hope that collective bargaining will give student workers a platform to negotiate for better compensation, job and workload protections, health and family benefits, as well as anti-discrimination and harassment policies.

Is the union working alone?

What does Harvard think of its students’ efforts to unionize?

Several top administrators have strongly denounced the unionization efforts. University President Drew G. Faust has argued that unionization would change the “mentoring” structure between students and faculty into a “labor relationship,” and that it would be detrimental to students’ learning experiences.

Prior to the NLRB ruling in August, Harvard jointly filed an amicus brief with six other Ivy League universities, Stanford, and MIT opposing student unionization. One of the case’s core arguments was whether academic student workers should be considered primarily students or university employees. 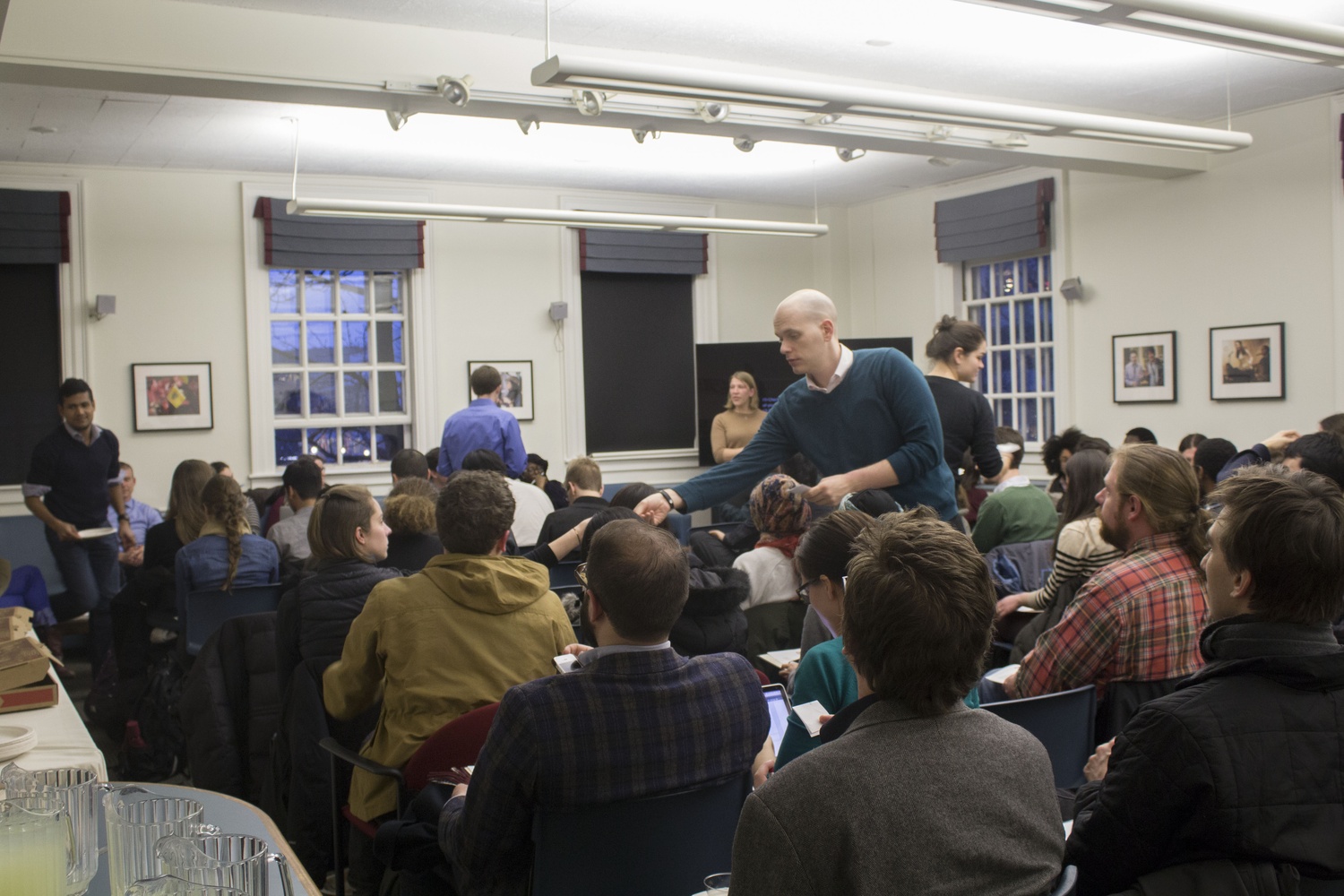 In the days leading up to the vote, top University administrators Graduate School of Arts and Science Dean Xiao-Li Meng, Faculty of Arts and Sciences Dean Michael D. Smith, and University Provost Alan M. Garber ’76 sent emails directly to the student body, urging eligible students to take part in the election and to consider potential consequences of unionization.

Why don’t some students want to unionize?

Some students worry that the cost of union dues might be greater than any potential pay bumps earned during collective bargaining. They also said that the union could disrupt academic projects and researched and are concerned that a single union could effectively negotiate for such a diverse labor force.

As the election date drew nearer, some students became more vocal about their criticisms of HGSU-UAW and formed their own loose organization, called “Against HGSU-UAW.” Many members of the group are science and engineering students, and fourteen graduate students recently penned a letter arguing that the NLRB should uphold the results of the November election. 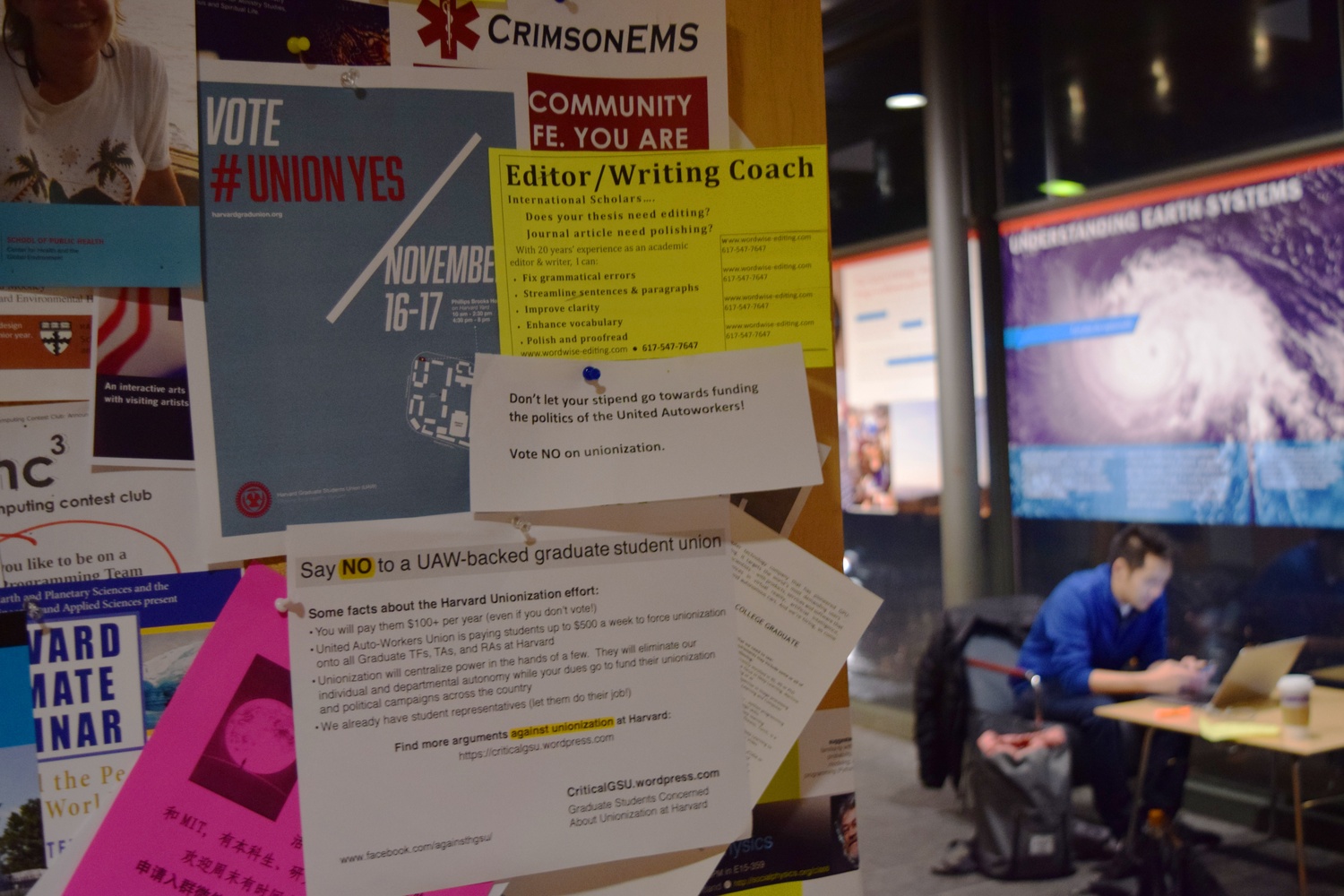 Signs supporting and opposing the graduate students establishing a union are posted on the walls of the Maxwell Dworkin lobby. By Jessica M. Wang

Why is the NLRB holding a hearing?

Here’s where it gets complicated. At the hearing Wednesday, the NLRB will consider two separate issues: which ballots from the November election should be counted and objections both Harvard and the union organizers filed to the conduct of that election.

The NLRB originally scheduled the hearing to decide whether 314 ballots, which were challenged and held separately from the other ballots, should count in the election. A December vote count that did not include the 314 contested ballots showed that 1,272 students voted in favor of unionization, while 1,456 opposed it. Because the vote margin against unionization was smaller than the number of unresolved challenged ballots, the vote count remains inconclusive. Depending on which ballots the NLRB decides to count at the hearing, the challenged ballots could sway the results of the election.

There’s more. Both HGSU-UAW and Harvard have filed formal objections to the November election. In their objection, the union organizers charge that the NLRB should invalidate the election and hold a re-vote. They argue that Harvard did not provide complete and accurate lists of eligible voters before the election.

Harvard’s objection is much more narrow in scope, taking issue with a single vote that was not counted. The NLRB worker who was counting votes from the election marked one ballot void because, in addition to marking the “no” box, the voter wrote a message to the vote counter and drew a smiley face.

The NLRB will consider both the objections and the challenged ballots at the hearing Wednesday, though it may not make a final decision about the outcome of the election that day. Both the union and the University will call witnesses to testify about the election. Both sides, working with their lawyers, also filed pre-hearing briefs with the NLRB.

What happens if students unionize?

HGSU-UAW would begin representing student employees in bargaining sessions with the University. Organizers intend to hold elections for a bargaining committee and to survey students about priorities during negotiations.

If the union ratifies a contract, all graduate student teaching and research assistants, as well as undergraduate teaching assistants, would begin paying dues to the union; it wouldn’t matter if an individual voted for unionization or not. UAW’s base rate for dues is 1.44 percent of an employee’s income—that money goes toward strike funds, paying organizers, and legal staffing.

Students could not fully opt out of the dues, but they could pay a reduced fee that only covers “representation” costs, which have to do with bargaining the contract, and not “non-representation costs” from political work, for example.