The College’s informal relationship with the 12 Houses, along with a perceived lack of staff and resources, has complicated its ability to implement the task force's recommendations.
By Hannah Natanson 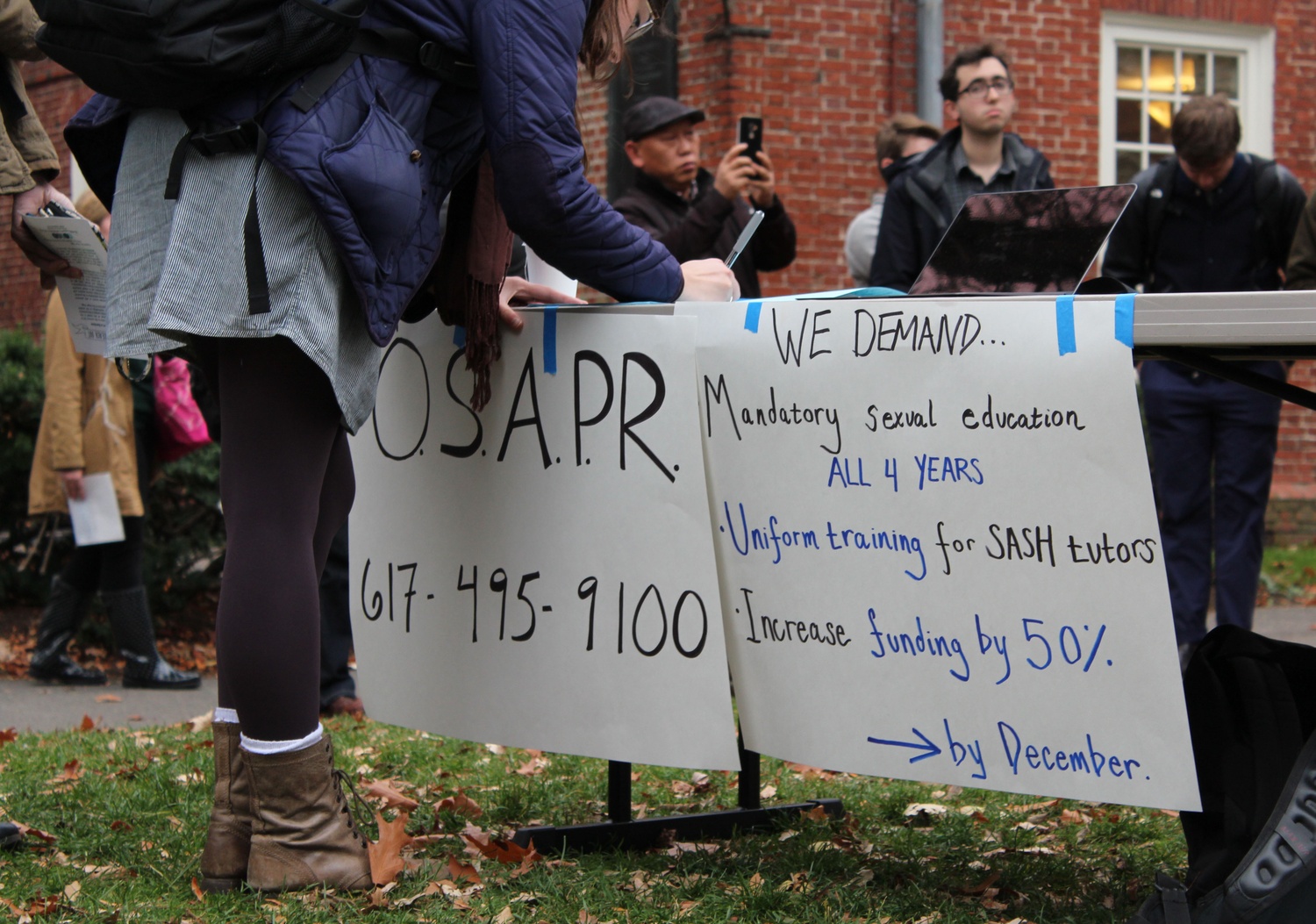 At a 2015 rally, students signed a petition in support of demands to overhaul Harvard's sexual assault prevention programs. By Sidni M. Frederick

An annotated version of the sexual assault report, meant to accompany Parts I and II of the series, can be found here.

Many women in the crowd needed no urging—at least, not when it came to the issue of sexual assault. A sexual conduct climate survey conducted that spring revealed that 31 percent of senior female respondents suffered some form of sexual misconduct during their time at Harvard.

The survey results, published in Sept. 2015, sparked shock and dismay across Harvard’s campus. University President Drew G. Faust called the numbers “anguishing” and pledged she would fight to change Harvard’s culture and “these kinds of realities.”

Six months after the survey’s release, a task force studying sexual assault prevention at Harvard issued a set of recommendations to help Faust keep her promise. The wide-ranging report focused particularly on the College, calling for a plan to address Harvard’s exclusive final clubs, mandating “small-group” and online prevention trainings, and requiring standardized instruction on hosting safe parties in each of the twelve undergraduate Houses.

Nearly a year after the task force published its recommendations, however, the College has made checkered progress in meeting the body’s demands.

Other recommendations, though, have been harder to enact. The College has yet to standardize safe party training across the Houses, and envisioned “small-group” sexual assault education sessions remain optional or nonexistent.

Overall, the College’s decentralized, informal relationship with the 12 undergraduate Houses, along with a perceived lack of staff and resources, has complicated its ability to fully address the task force’s recommendations—particularly those touching on students’ residential life.

Casey wrote in an email at the time that she felt Harvard’s programming on sexual assault and relationship health issues simply “[wasn’t] good enough.”

Other Houses, however, took a different tack. While Lowell students trundled to meetings with peer educators from the group Consent Advocates and Relationship Educators, residents in some Houses underwent no required trainings.

“My House did not do that,” Jessica R. Fournier ’17 said. “It’s really variable, depending on where you live, how much training you’re getting once you’re no longer a first-year student.”

Harvard has long juggled administrative oversight with House independence. Faculty Deans do not regularly update the Dean of the College on their progress on the task force recommendations, according to College spokesperson Rachael Dane.

This informal structure has complicated the College’s ability to enact new sexual assault prevention trainings in the Houses. Though all freshmen attend mandatory sexual assault information sessions when they first arrive on campus, many education initiatives for upperclassmen remain optional, and programming varies House to House.

In particular, the College has found it difficult to heed the task force’s call to “formalize and standardize” training on hosting safe parties across Harvard’s Houses. To date, at least two Houses—Mather and Cabot—have implemented party registration systems requiring students to participate in alcohol education workshops before hosting parties, though both did so before the report’s publication.

Faculty and resident deans from the other 10 Houses did not respond to repeated requests for comment. Multiple College administrators contacted for this story said they were unsure which Houses had enacted safe party training and which had not.

Fournier, an active member of anti-sexual assault advocacy group Our Harvard Can Do Better, said she finds the discrepancy in levels of trainings across the Houses unacceptable. She called the College’s response to the sexual assault climate survey and the subsequent task force report “sporadic.”

But Alicia Oeser, the director of the Office of Sexual Assault Prevention and Response, said top-down initiatives from the College do not work.

“The thing about mandatory programming is, if you wave a magic wand, and are like, ‘Now it’s implemented,’ I mean first of all, very logistically challenging,” Oeser said. “But also, it’s not one size fits all. Each House looks different, the number of party suites, the process for registering parties—all of this is different, so we couldn’t just go in and do the same thing everywhere.”

Emily J. Miller, the College’s Title IX coordinator, said she would “absolutely love” to see safe party training enacted in every House. But she agreed with Oeser that creating a formal, standard requirement across the Houses would be difficult.

“I think it’s easier to get by in those smaller communities, when it’s their thing, I think there’s always some resistance to top-down things,” Miller said. “But I do think it would be more efficient for the College sort of centrally to say, ‘This is now a requirement.’”

Faculty Dean of Cabot House Stephanie R. Khurana said the Houses’ mixed enforcement of safe party training—with each House deciding whether and how to participate—is typical of how “ideas develop and things happen” at the College.

She added Harvard has always struck a balance between acting centrally and allowing the Houses to pilot and develop their own programs.

'A Box to be Checked'

“The quality of education efforts must be improved,” the report reads. “Education must be delivered not in the spirit of a bureaucratic box to be checked, but as lessons that will be attended to, taken seriously, and internalized.”

To that end, the report demands that small-group sexual assault prevention trainings be required of student leaders and athletic team members, and asks that Houses periodically host small-group discussions of sexual assault-related issues for all undergraduate residents.

Eleven months later, the College has taken large-scale steps to ensure undergraduates are educated about sexual assault, including debuting an online training module. As of Jan. 2017, 67 percent of College students had chosen to complete the online course.

This semester, the College also piloted a new program for House residential tutors—called the lead CARE tutor program—that provides one tutor with additional training in sexual assault prevention and response in each House. Luke Leafgren, the resident dean of Mather House who helped coordinate the new tutor trainings, said he believes the tutors will deepen student awareness of sexual harassment and of Harvard’s resources for people who have been sexual assaulted.

But the College has made less progress implementing the task force’s recommendation for small-group trainings. OSAPR small-group sexual assault programming for student leaders and varsity teams currently functions on an “opt-in” basis, according to Oeser. Small-scale in-person trainings at every House, meanwhile, remain theoretical, though some Houses—like Lowell—have independently pursued such programs.

The College’s inability to uniformly offer smaller, more personal sexual assault trainings for students stems in part from a lack of resources, according to multiple administrators.

“So I remember pondering the question of how do we provide that, where do we get the resources in terms of people hours and expertise,” Leafgren said. “The lead CARE tutor position is one way to take a stab at that and make some progress, but I think we also realize that that’s not enough.”

“I think we really want every student to have an in-person training of some kind, in-person conversation, in some format each year they’re at the College… it’s a really hard challenge,” he added. 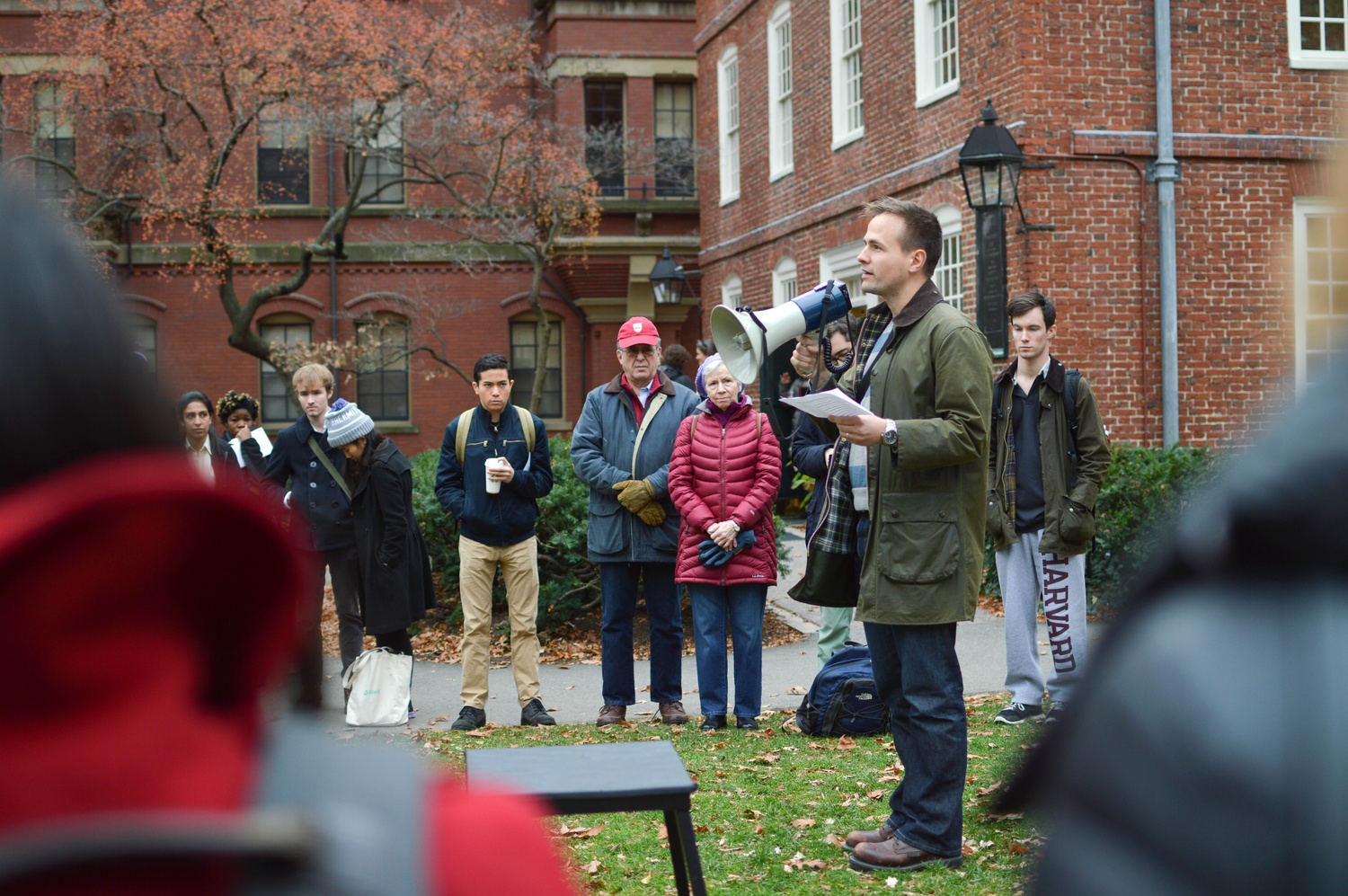 'I certainly care about this issue,' said resident dean of Mather House Luke Leafgren at a 2015 protest against sexual assault. He continued, 'and I do see many other administrators...who feel as strongly as I do about the need to make this campus safer.' By Y. Kit Wu

Mather Faculty Dean Michael D. Rosengarten agreed with Leafgren that students should have to undergo in-person trainings, but said the College currently lacks the “numbers” to implement such a system.

Rosengarten also raised concerns about the effectiveness of the online module.

“There always are people saying, ‘Oh, what if somebody sits their dog in front of the thing, and lets it watch the computer?’ How do you know they’ve actually learned the information?” he asked. “I think it’s got to be blended. Part face-to-face, and part computer, that’s the only way it’s going to work.”

Miller, who helped develop the online training module, said the program was not intended to stand alone. She said the course focused mainly on University policy and procedure, which she called “things you can effectively take in online.”

Miller said the other side of sexual assault prevention—namely, “creating culture change around community values”—should come from in-person, small-group trainings. She said it falls to OSAPR to conduct these trainings.

But OSAPR remains a relatively small office, with just five staff members. Speaking of various programs proposed in the task force report, Oeser said that “we can’t wave a magic wand and grow more” staffers and students involved with the Office.

“There’s only so many that can be in so many places at once,” Oeser said. She added, however, that OSAPR continues to “grow” its programming.

After a separate presidential task force recommended increasing support OSAPR in 2014, administrators did increase OSAPR’s funding and double its staff by Feb. 2015. But student demand expanded right along with the Office, leaving OSAPR stretched to full capacity almost immediately, according to Oeser.

Reflecting on the College’s response to issues of sexual assault, Dean Rakesh Khurana said in an interview earlier this month he thought Harvard had made progress, but that there was still more to do.

Khurana added he hopes to create an academic and residential environment where” the equality and respect and dignity is kind of just taken for granted.”

“Until we achieve that, I’m not going to feel satisfied,” Khurana said.