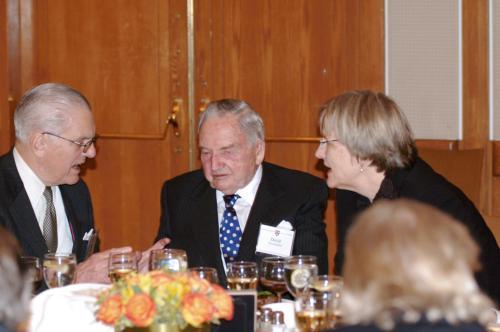 David Rockefeller '36, who passed away Monday, is pictured here in 2008. By Aditi Balakrishna

Harvard alumnus and business baron David Rockefeller ’36, who donated generously to several Harvard initiatives and for whom a center for Latin American studies was dedicated, passed away Monday. He was 101.

A member of the famed Rockefeller family—an international business dynasty—his influence stretched around the globe; he visited at least 103 different countries during his time at Chase Bank.

Harvard, where Rockefeller spent his undergraduate career living in Eliot House and later served as president of the University’s second-highest governing body, was the beneficiary of at least $140 million dollars in gifts from Rockefeller, making him one of Harvard’s most generous supporters.

In a statement shortly after Rockefeller’s death, University President Drew G. Faust hailed Rockefeller as “a visionary leader, an extraordinary philanthropist, and a devoted friend,” and dwelled on the billionaire’s expansive contributions—both monetarily and in service—to Harvard.

“His passion for Harvard was infectious, and his commitment to the arts, to experiential learning, and to increasing knowledge of other cultures has made a lasting impact on the University and the thousands of students and scholars who have benefited from his generosity,” Faust wrote.

The summer after his freshman year at the College, Rockefeller studied abroad in Germany. The year was 1933, and he witnessed the rise of fascism there firsthand. He felt strongly about giving students the opportunity to go abroad, something he believed would enrich the undergraduate experience.

In 2006, Rockefeller was on the cusp of donating $75 million to Harvard’s Center for Latin American Studies—which he had established with a $25 million donation in 1994—but withheld the donation after then-University president Lawrence H. Summers resigned. In 2008, Rockefeller made a $100 million gift, then the largest one-time alumni gift in Harvard’s history, to bolster aid for students studying abroad and to support the renovation of the Harvard Art Museums.

While Rockefeller, previously the oldest billionaire in the world, is widely known for his business and philanthropic acumen, he was also a “somewhat shy naturalist” who nearly always had a small insect jar with him while traveling, according to Professor Brian D. Farrell, who directs of the David Rockefeller Center for Latin American studies.

“Another biography of David was written in tiny little letters on the labels underneath the insects that he collected since he was seven years old,” Farrell mused. “I was really stunned by how thoroughly he knew insect classification. He recognized everything—really quite remarkable for anyone.”

According to Farrell, Rockefeller’s collection of over 150,000 specimens representing 10,000 species will be donated to the University sometime in the next year.

Farrell remembered Rockefeller as a “very gentle and courteous man.”

“He was really a model in a way,” Farrell said. “He’s this kind of fellow who makes everyone feel comfortable in his presence. Very low key and thoughtful. Not at all brash, not at all entitled feeling. Just a very modest character, and I think that was a family trait.”