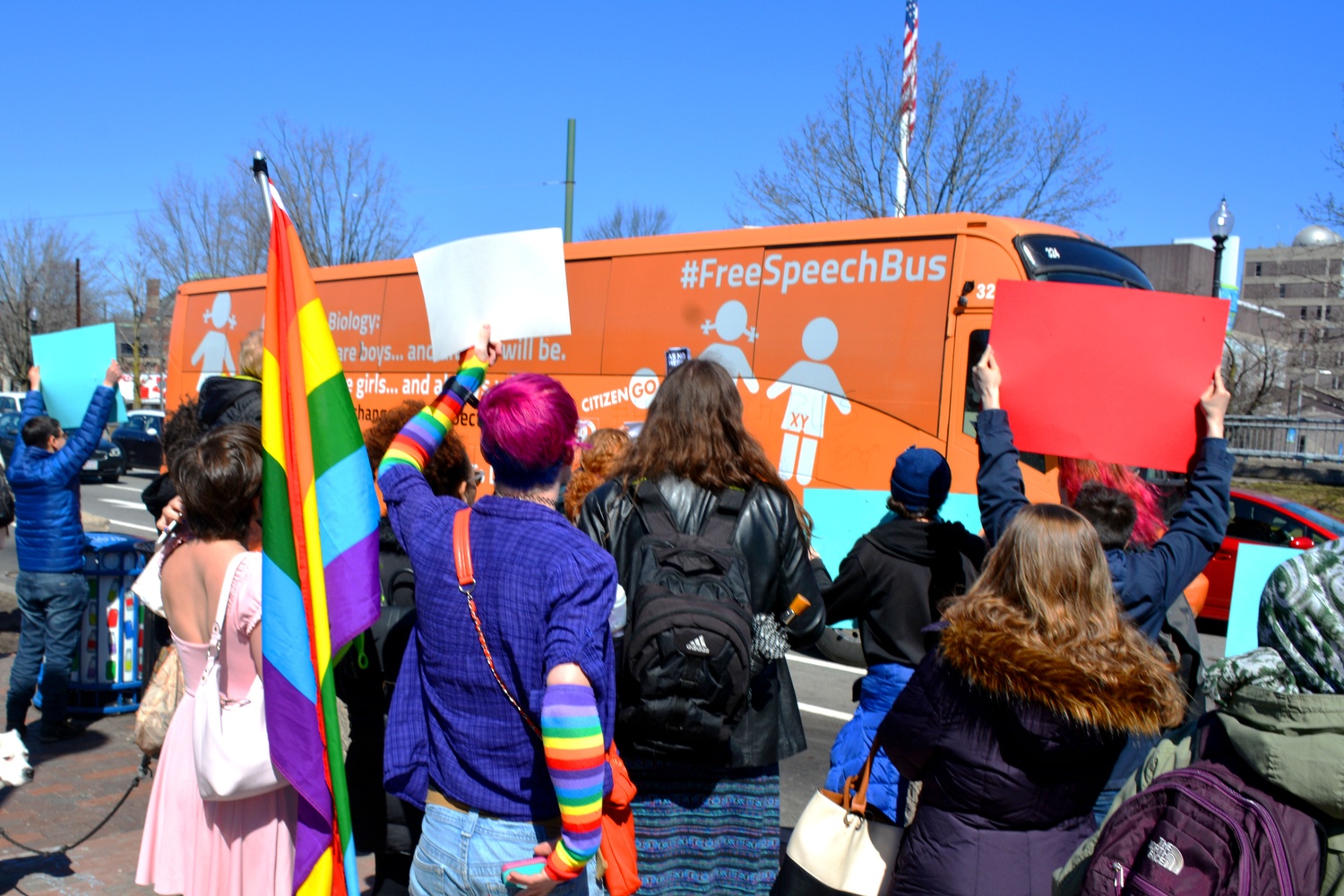 At the junction of Mass. Ave. and Garden St., a group protests the anti-transgender message of the "Free Speech Bus.” By Megan M. Ross
By Hannah Natanson and Derek G. Xiao, Crimson Staff Writers

Reaching campus around 1 p.m., the bus parked at the intersection of Massachusetts Ave. and Garden St.—across the street from Harvard Hall—where it remained for just under an hour. The protesters gathered to await the vehicle’s arrival, some holding rainbow flags and raising signs reading “Trans is beautiful.”

On Thursday, protesters scrawled in permanent marker over the bus’s lettering with the words “HATE SPEECH BUS,” as well as, “Hate is not welcome here.”

When Grabowski disembarked from the bus, demonstrators crowded around him, making explicit gestures and attempting to drape a rainbow pride flag over his shoulders.

“Unfortunately, it’s a very one-sided policy debate right now because of the fact that the noisy minority has been able to shout down the other side,” Grabowski said to protest.

In an interview earlier this week, Grabowski said he hoped to have “a reasonable discussion” with students at Harvard. Surrounded by demonstrators Thursday, Grabowski said this was unlikely to happen, adding it was now up to “policymakers,” instead of students, to continue the conversation.

While the bus remained parked near Harvard Hall, students and administrators from the Office of BGLTQ Student Life gathered in the Science Center Plaza to hang a banner reading “Trans Lives Matter.” Equipped with markers, BGLTQ Office staffers remained in the Plaza for roughly two hours, inviting anyone who walked by to add their name to the sign.

Over the course of the afternoon, scores of passersby—including Harvard students and faculty—signed the banner and wrote short messages of support.

“ALL the LOVE,” wrote Harvard lecturer Caroline Light, who serves as the director of undergraduate studies for Harvard’s Women, Gender, and Sexuality program.

The bus stopped at the Massachusetts State House in Boston Thursday morning before driving into Cambridge. At 12:30 p.m. Thursday, Boston Mayor Martin J. Walsh raised the transgender flag on City Hall Plaza “in response” to the vehicle’s arrival, according to a City of Boston press release.