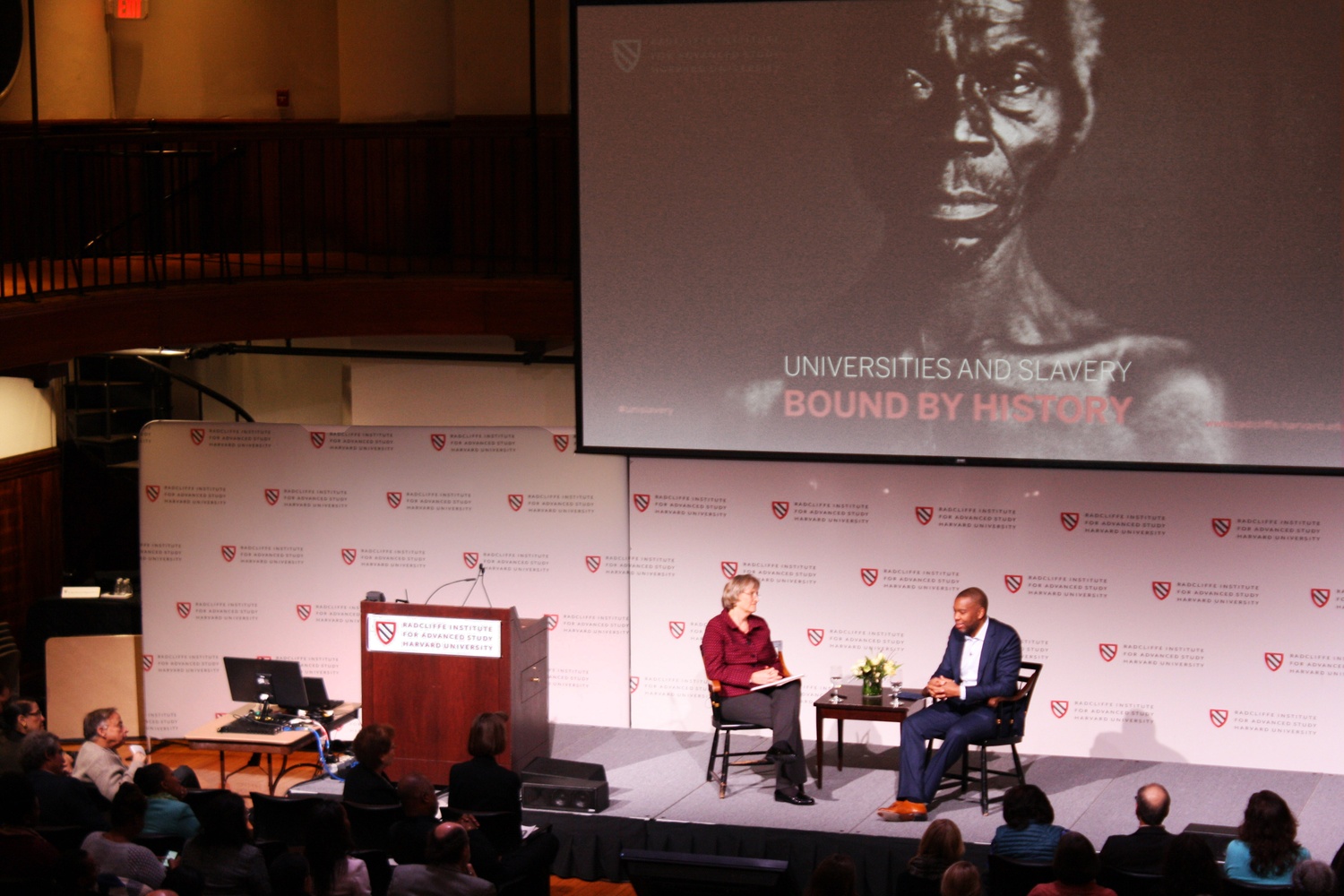 A conference on universities and slavery brought Harvard’s extensive and long-obscured historical connections to slavery into sharp relief Friday, with some participants encouraging the University to consider monetary reparations.

The conference, entitled “Universities and Slavery: Bound By History” and sponsored by the Radcliffe Institute for Advanced Study, is the latest in a series of efforts Harvard has taken to confront its ties to slavery. A year in the making, the daylong event featured historians and representatives from several universities, and a keynote address by The Atlantic writer Ta-Nehisi Coates. University President Drew G. Faust announced plans for the conference in March 2016.

In her opening remarks, Faust called slavery “an aspect of Harvard’s past that has been rarely acknowledged and poorly understood.”

“Harvard was directly complicit in slavery from the College’s earliest days in the 17th century,” Faust said. “This history and its legacy have shaped our institution in ways we have yet to fully understand. Today’s conference is intended to help us explore parts of the past that have remained all but invisible.”

Repeatedly describing slavery and racial discrimination that arose from it as “plunder” in his keynote address, Coates urged attendees to recognize the scope of slavery and the “systems of plunder that haunt us to this very day.”

Coates, a famous proponent of monetary reparations, laid out that case for attendees Friday, arguing that progress on racial issues requires institutions to repay their debts to enslaved people.

“I think every single one of these universities needs to make reparations,” he said to wide applause. “I don’t know how you get around that, I just don’t. I don’t know how you conduct research that shows that your very existence is rooted in a great crime, and just say ‘well,’ shrug—and maybe at best say ‘I’m sorry’—and you walk away. And I think you need to use the language of ‘reparation.’ I think it’s very, very important to actually say that word, to acknowledge that something was done in these institutions.”

“We cannot successfully move forward as a university, as a nation, or as citizens, without acknowledging this history, and making it important to the understanding of our present,” Beckert said. “And to be meaningful, that acknowledgement will have to have economic and political consequences; it cannot be purely symbolic or rhetorical.”

In a question-and-answer session in the afternoon, an audience member asked Beckert if he supports Harvard paying reparations.

“There is a responsibility to address these past injustices and also to address them in material terms,” Beckert responded. “What this exactly looks like, I can’t tell. But I think the importance is to acknowledge this and then to have a conversation in a community—for example, a university community—to see what the proper steps are that should be taken.”

In recent years, universities across the country have begun to delve into their historical ties to slavery and take action in response. Emory University’s Board of Trustees released a formal statement of regret, Brown University dedicated a slavery memorial in 2014, and Georgetown University agreed to offer preferential admissions status to the descendants of slaves the university sold in 1838.

At Harvard, the process of unearthing this history began in 2007 with a seminar on Harvard and slavery led by Beckert. Over the ensuing ten years, Beckert’s students uncovered stories of the slaves who worked on campus under two Harvard presidents, donations from wealthy slave-owners, and endowment investments linked to the slave economy. One of Beckert’s students, who presented the findings of her senior thesis at the conference, found that Harvard used the Caribbean plantation of a formerly slaveholding benefactor as a research station until 1961.

Slavery shaped the intellectual history of Harvard as well. Professor Louis Agassiz conducted research to support polygenism—a theory that grounded racial differences in genetics—and the photograph of a South Carolina slave he studied as a specimen stared out at the audience Friday from the cover of the conference’s program.

But the piece of Harvard’s past that first galvanized students and brought Harvard’s connection to slavery into the national spotlight was encapsulated by the three sheaves of wheat that used to adorn the Law School’s seal. The sheaves formed the family crest of Isaac Royall, Jr., a Medford slave owner who derived his wealth from a sugar plantation in Antigua. Royall’s 19th century bequest helped establish the Law School in 1817.

In 2015, a group of Law School activists began calling for the seal’s removal—a request a Law School committee granted in March 2016. After approval from the Harvard Corporation, the Law School removed the Royall crest from its premises.

The movement sparked University-wide conversations about Harvard’s connections to slavery. In April 2016, Faust dedicated a plaque to the four enslaved persons who worked at Wadsworth House, and appointed the faculty committee to brainstorm and recommend further initiatives. A new exhibit at Pusey Library explores the relationship between Harvard and slavery, and Faust has pledged to provide funds for a researcher to continue looking into this relationship.

But Faust has stopped short of offering reparations. After Georgetown announced it would provide an admissions advantage for the descendants of former slaves, the ambassador from Antigua and Barbuda wrote a letter to Faust, calling on Harvard to offer preferential admission to Antiguans and provide funds to construct universities in Antigua—a proposal the University rejected.

In an interview in fall 2016, Faust said efforts like Georgetown’s program would not be appropriate for Harvard, since the University did not directly own slaves.

“I am not aware of any slaves that were owned by Harvard itself, and slavery was much less of a presence and an economic force in New England than it was in Washington, D.C., and the South,” Faust said. “Mostly slave records were kept as economic records, business records, and the records we have of slaves at Harvard are much scarcer and less complete.”

In Coates’s view, however, adequately recognizing a past tied to slavery requires some form of financial reparations.

“Let me be very clear about something: I do think it involves a payment of money,” Coates said in a conversation with Faust at the conference.

The faculty committee will continue to examine Harvard’s connection to slavery and plans to release a set of recommendations to the University, Beckert said in an interview with The Crimson Wednesday.