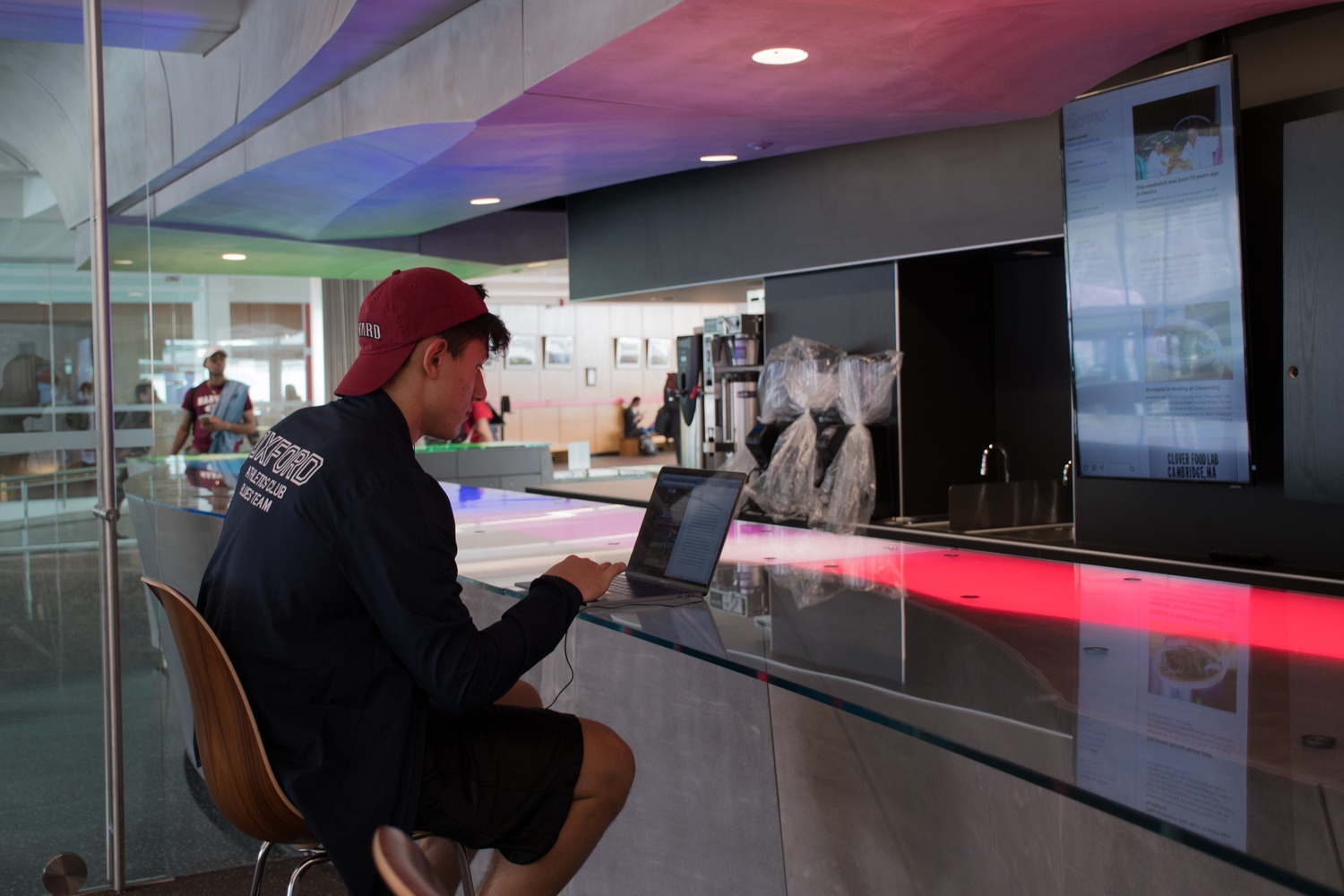 Alex O. Kirby ‘17 works at the coffee bar in Cabot Science Library on Monday afternoon. The coffee bar will be part of the Clover restaurant, which is slated to open beside the renovated library in the Science Center in the coming weeks. By Megan M. Ross
By Alison W. Steinbach and Katherine E. Wang, Crimson Staff Writers

The news that Clover Food Lab will open in the Science Center in a few weeks and replace Greenhouse Cafe has started to divide the student population along culinary lines: for some, the change is a more healthful and convenient dining option, while others say they will miss the greasy grab-and go.

Quickly, the decision to swap chicken fingers for chickpea fritters in a central artery on campus has sparked a flurry of posts on social media and discussions around campus. Clover enthusiasts were thrilled to be able to grab signature pitas and popular coffee in between classes, but others expressed frustration and disappointment.

Teddy Landis ’20 said he was “very upset” when he learned that Clover—a local vegetarian chain with another location on Massachusetts Ave.— was coming into the Science Center.

Alongside the recently refurbished Cabot Science Library, the new location of Clover will open in the Science Center sometime in the next few weeks, according to Lucia K. Jazayeri, director of communications for Clover. She said the new location will have a Crimson Cash reader, but was not sure if the location would be accepting BoardPlus.

“We are going to do Crimson Cash, but I’m not sure which variety,” Jazayeri said. “I know there are two different kinds. But we will have a Crimson Cash reader, we will be able to take Crimson Cash.”

The possibility of purchasing exclusively vegetarian food in between classes was enticing for some students.

“I’m excited about having Greenhouse’s space turn into Clover’s,” Gabriel H. Karger ’18 said. “I think it will be connected to more open spaces, so it’ll have some of the old feel, which is cool.”

“This’ll be our chance to really experiment with snacks and prepackaged things that we make or things that we source from people in the Boston area that we really love,” Jazayeri said.

Clover enthusiast Angie Cui ’20 was particularly excited to be able to get Clover coffee at a more convenient location.

“I really like the coffee at Clover,” Cui said. “I’ve found that it has a lot of caffeine in it and really just wakes me up in the middle of the day.”

“Greenhouse was a really important part of my first two years at Harvard and I was really looking forward for it to come back after construction was done in the Science Center,” Scott said. “Greenhouse I thought had amazing pizza—the best in Cambridge, for sure—and also a variety of different snack foods, whereas Clover I see as something, maybe I’d get there once a semester. They’re very strange, kind of particular types of food that appeal to less of a wide and casual audience.”

This is not the first time dining options in the Science Center have provoked strong feelings from students. In 2003, students lamented the departure from Chick-fil-A from the Science Center, and some even submitted a petition to bring the chain back to campus.