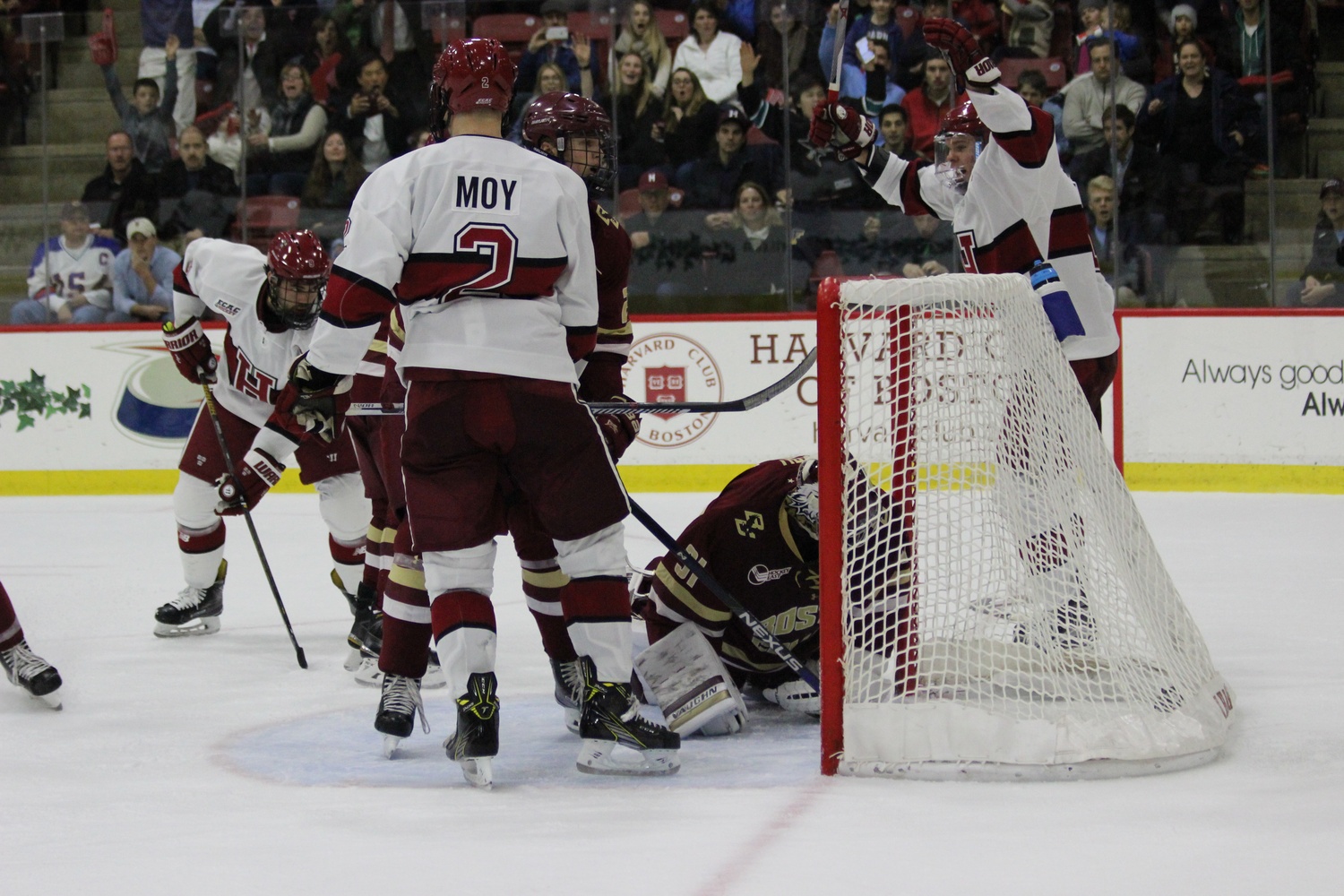 Sean Malone wanted nothing more than to play his final hockey game of the season last Saturday in Chicago. But Sunrise, Florida wasn’t such a bad alternative.

Less than 48 hours after Harvard bowed out of the Frozen Four on April 6 at the United Center, Malone received the opportunity of a lifetime—a chance to suit up for his hometown team, the Buffalo Sabres.

The Sabres announced on April 8 that they had signed Malone, their sixth-round draft choice in 2013, to a two-year entry-level deal. And by night’s end, the 6-foot 190-pound forward had been penciled in as Buffalo’s fourth-line center against the Florida Panthers.

Sporting the number 42, Malone received 12:12 of ice time, finished 5-for-8 at the faceoff dot, and registered one shot on goal in his National Hockey League debut.

“[The team] got together and watched it, so I got to see every shift,” senior Luke Esposito said. “I think all of us agree that he deserves that opportunity. He was a standout in college and especially this year being healthy, you got to see the true extent of his skills and his speed on the ice.”

Suiting up for a career-high 36 games, Malone more than doubled his previous high in points with 42—third-best on the Crimson. And in his first professional stint, he looked like he “fully fit in,” according to Esposito.

The opportunity was the culmination of a lifelong dream for Malone, who said in the lead-up to the Frozen Four that “growing up as a kid from [the Buffalo] area, you want to eventually put on that Blue and Gold.” But the senior also acknowledged that he hadn’t been thinking about hockey after Harvard during the season—something Harvard coach Ted Donato ’91 reaffirmed.

“One of the things our guys have done a great job with—and it started out with Jimmy [Vesey ’16] and continued on this year—is they’ve really dedicated themselves to the moment and to the team now,” Donato said. “I think that’s a real tribute to the type of character kids that we have.”

“I wasn’t caught off guard with the opportunity that Sean had,” the coach continued. “But I think he had his focus 110 percent on his Harvard Hockey opportunity. And I think that’s all you can ask for as a coach or a teammate.”

As part of said Harvard Hockey opportunity, Malone played on an all-senior—and now all-signed—second line. Malone’s linemates, Tyler Moy and Esposito, both signed professional contracts after their center became the first to break the ice.

On April 10, the Nashville Predators announced that they had inked Moy, a sixth-rounder in 2015, to a two-year entry-level deal. Moy said the Predators understood that they should give him “space to go through all the emotions of a collegiate career ending,” but the two sides ultimately wound up discussing a contract the day after Harvard’s elimination.

Moy, along with the members of his inner circle, all agreed that the Predators’ organization offered him the best fit. The San Diego, Calif., native said that since being drafted by Nashville after his sophomore season, he has been treated exceptionally well by the club.

So he closed the deal. And now Moy has joined the Milwaukee Admirals, the Predators’ American Hockey League affiliate, to close out the 2016-2017 season.

“Obviously it’s a pretty exciting time and something you dream about as a kid,” Moy said. “I couldn’t be more excited to be here in Milwaukee and try to help out the Admirals in any way I can, especially leading into the playoffs. It’s a really great opportunity for me, and I couldn’t be more thankful for it.”

In his senior season, Moy logged a Crimson-best 22 goals and finished tied with co-captain Alexander Kerfoot for the team lead in points with 45. Meanwhile, the 6’1” forward continues to produce, having logged at least a point in each of his first three games with the Admirals.

Furthermore, Moy netted his first professional goal Saturday against the Grand Rapids Griffins, home of not only ex-Harvard co-captain Kyle Criscuolo ’16, but also as of a week ago, Esposito.

Esposito signed a one-year deal with the Griffins for the 2017-2018 season, which was announced by the team last Wednesday. The undrafted forward from Greenwich, Conn., also signed an amateur tryout contract for the rest of the Griffins’ current campaign, but he will not begin playing for the team until next season.

“It’s a long-time dream of a lot of players to get a chance to play professional hockey,” Esposito said. “Just to play hockey after college and get paid to do it, it’s pretty special.”

Esposito said that the Griffins formally expressed an interest in him midway through the season; however as a byproduct of the Griffins’ scouting of Criscuolo, Esposito had already been on their radar. The 5’10” forward’s breakout senior campaign only stood to help his status; Esposito followed up three straight five-goal seasons with 16 lamp-lighters and 36 points in his final go.

As a result, Esposito’s now a signed professional—just like his two former linemates. But in Esposito’s own words, all three are now rookies yet again, starting from “ground zero.”

“It might be a long time until we get to find a line that’s that consistent with that chemistry,” Esposito said. “We didn’t take it for granted and we enjoyed it as much as we could…. Now we’re all looking to move on.”