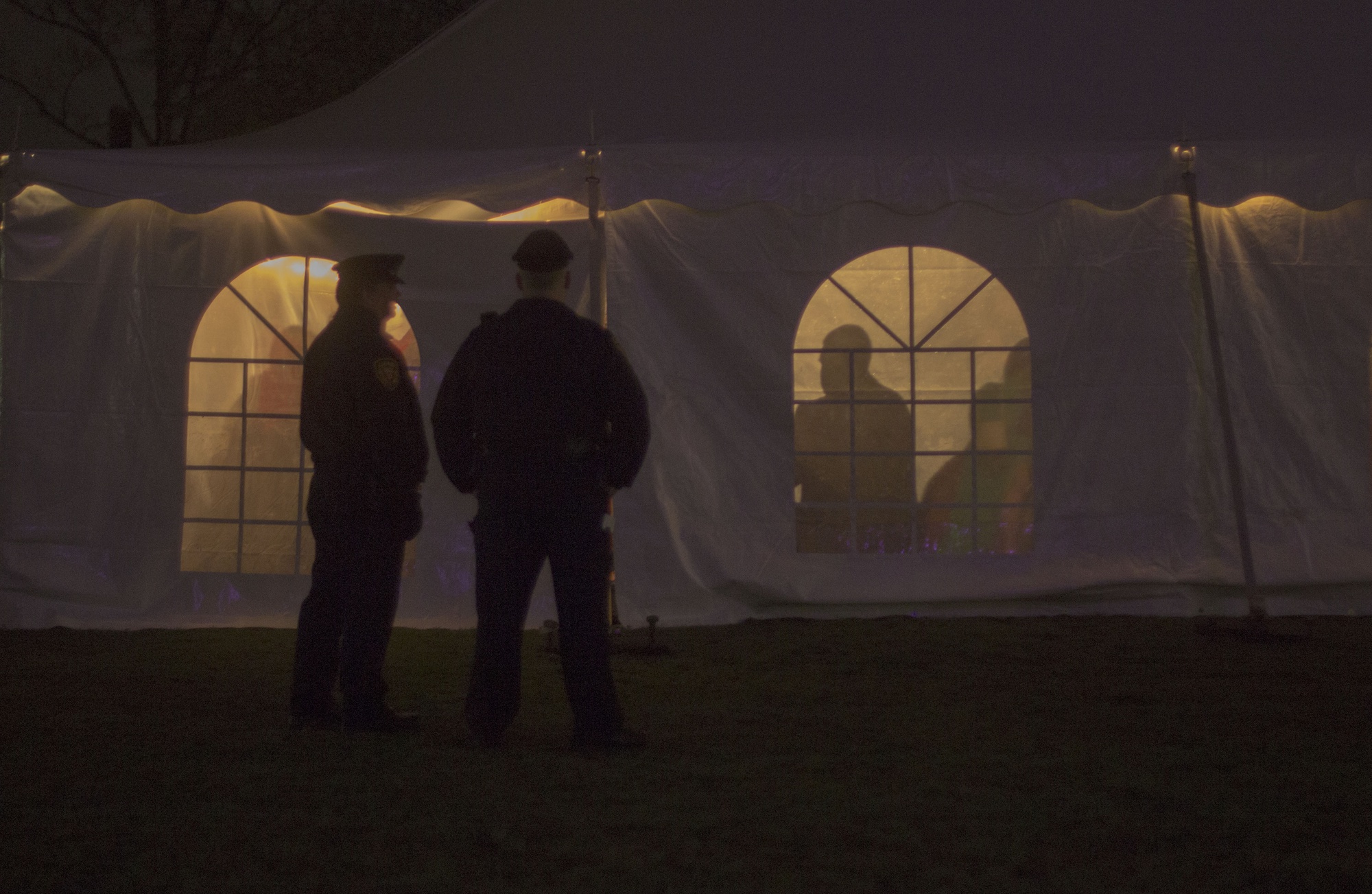 Security officers watch over the Quad Formal Friday. Though HUPD is present around campus all hours of the day, extra security is required for formals and similar events, adding an additional cost to event budgets.
By Laszlo B. Herwitz, Crimson Staff Writer

With the end of classes, many Harvard undergraduates have traded textbooks for tuxedos for the beginning of a time-honored tradition that doesn’t involving cramming: House formal season.

Every semester, Harvard’s undergraduate Houses organize formal dance events for residents and friends. While the events take place during reading period and coincide with deadlines, they’ve been popular among the students who both plan and attend them.

The largest of House formals takes place in the Quad. The Pforzheimer, Currier, and Cabot House Committees collectively organized the Friday night event. Tickets,offered at $25 each, sold out well before Friday night and attracted students from the Quad and the River Houses alike. 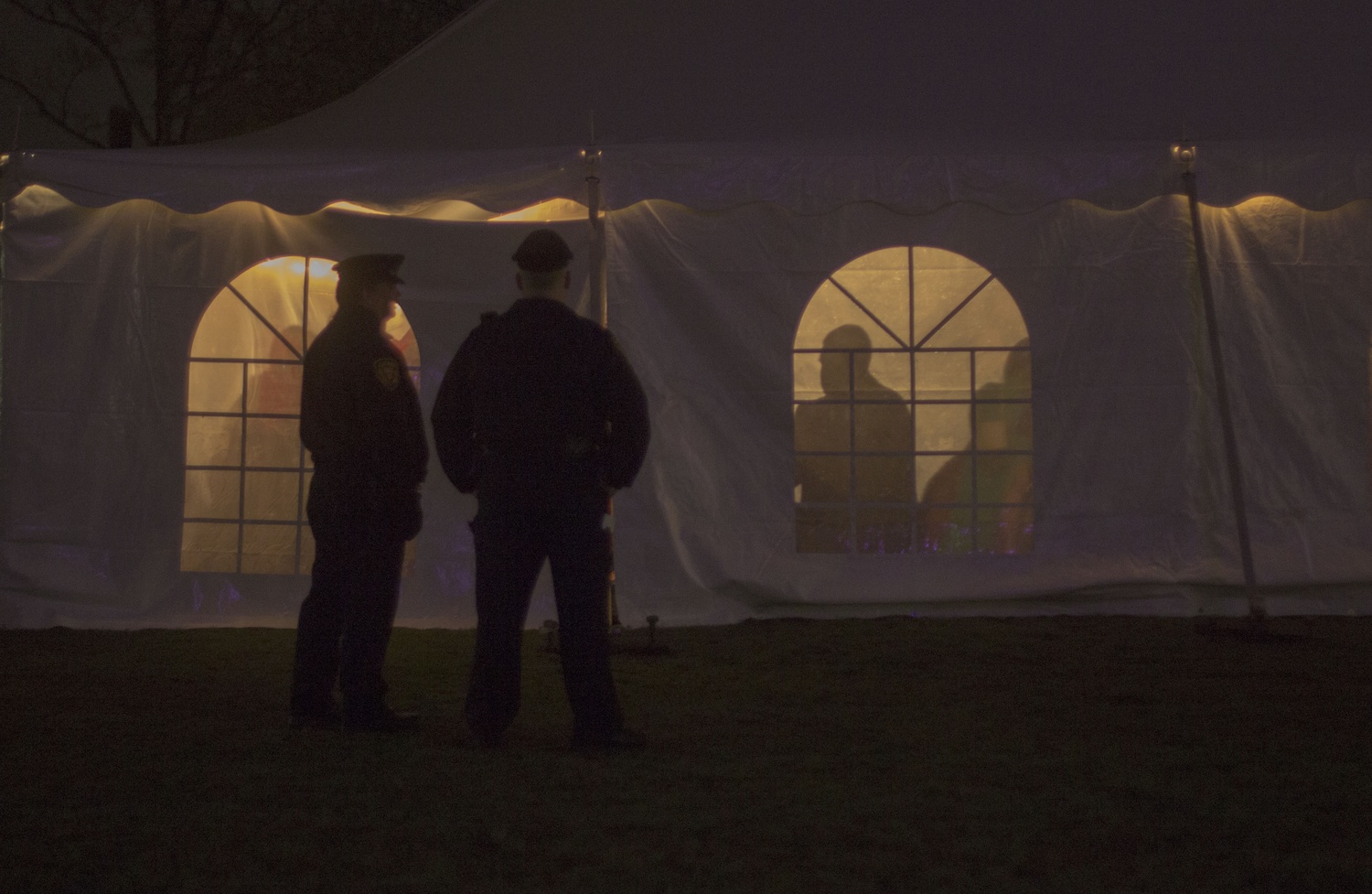 Harvard University Police Officers stand outside a tent housing one of the spring semester's many House formals. By Helen Y. Wu

“It was under a giant tent. The food area, the dancing, everything was in one place,” said attendee Amy Huang '17. “I think it’s something we don’t have on the river. There’s nothing that really brings the community together the way Quad formal brings the Quad community together."

While Quad formal was a collaboration between several Houses for a larger event, the Kirkland House committee put on a smaller gathering tailored to its residents.

“Kirkland formal differs from a lot of the other formals I go to, because here, I know everyone. It’s not one of the formals that a lot of outside people go to,” said Kirkland resident Thomas G. Dumbach '18.

The formal featured Kirkland students and tutors performing a music and a “very classic spring floral theme,” according to Dumbach.

At Winthrop House, construction necessitated a departure from the standard house formal layout.

“Unfortunately this year because of swing housing we don’t have a courtyard, but we’re doing it here in the [Harvard Inn],” Winthrop House Committee Co-Chair Danielle O. Strasburger ’18 said.

Because of the construction, Winthrop changed the theme of the formal from the standard “Arabella Ball” of years past.

“We’re calling it Club Arabella this year to signify the fact that it’s a different vibe this year. It’s going to be a club, lounge feel with a dance floor and some chairs and tables and a cool light-up bar,” Strasburger said.

Because of the location change, Strasburger said she’s making extra efforts to improve turn out for the event.

“It’s tough being in the dining hall,” she said. “We’ve been working really hard to drum up excitement through word of mouth, really talking it up to people and explaining that it’s not just another d-hall party.”

Adams House will put on a “Beauty and the Beast” themed event Sunday, and Cleanna Crabill '19, the social chair of House Committee, said. She said attendance can be hard to predict.