Meetings of the Faculty of Arts and Sciences, held in University Hall’s opulent seafoam-green Faculty Room, are ordinarily rather sparsely attended. But last November’s gathering was no ordinary meeting.

Some of Harvard’s most senior faculty were forced to sit on the floor as the designated chairs filled up. Others, who arrived later, perched in the doorway, craning their necks to see the front of the room.

The Faculty had come in droves to discuss the College’s penalties on members of single-gender final clubs and Greek organizations—more specifically, a motion brought by one of their own against the policy. As professors took to the microphone one by one to alternately praise and lambast the sanctions, administrators—including architect of the policy Dean of the College Rakesh Khurana and University President Drew G. Faust, presiding over the meeting—stayed mostly silent.

In an interview later in January, Faust said she was surprised that the Faculty had taken such a strong interest in an undergraduate social life issue.

“We didn’t anticipate this level of faculty interest when we started working on the policy last year,” Faust said.

However, over a series of contentious Faculty meetings, it became clear that, to many, the issue was about more than who receives a final club invitation slipped under their door.

The policy has revived the perennial question of just who runs Harvard: the people in the classrooms or the people in University Hall? For some, the historic sanctions on social life have encroached upon the authority of the Faculty, and the response has been swift.

“This is not a faculty that will allow itself to get pushed around,” Government Department Chair Jennifer L. Hochschild said.

One year since the policy—two Faculty motions and one unexpected committee later—the debate shows little sign of abating, even as sanctions are scheduled to take effect for the freshman class in the fall.

Still, despite the cohort of vocal Faculty detractors to the policy, many at at the University see the issue as one best left to the administrators hired specifically to manage student social life. According to Faust, the Faculty had not concerned itself with student social organizations for the last “decade and a half.” But that time has seen other high-profile clashes over faculty governance, and Faculty involvement in undergraduate social life, broadly constituted, is nothing new.

Throughout Harvard’s history, the Faculty has been a sleeping giant—often dormant and content to focus on work in the classrooms, but unafraid to flex its muscles if provoked. For some, the sentiments stirred by the sanctions debate feel all too familiar. 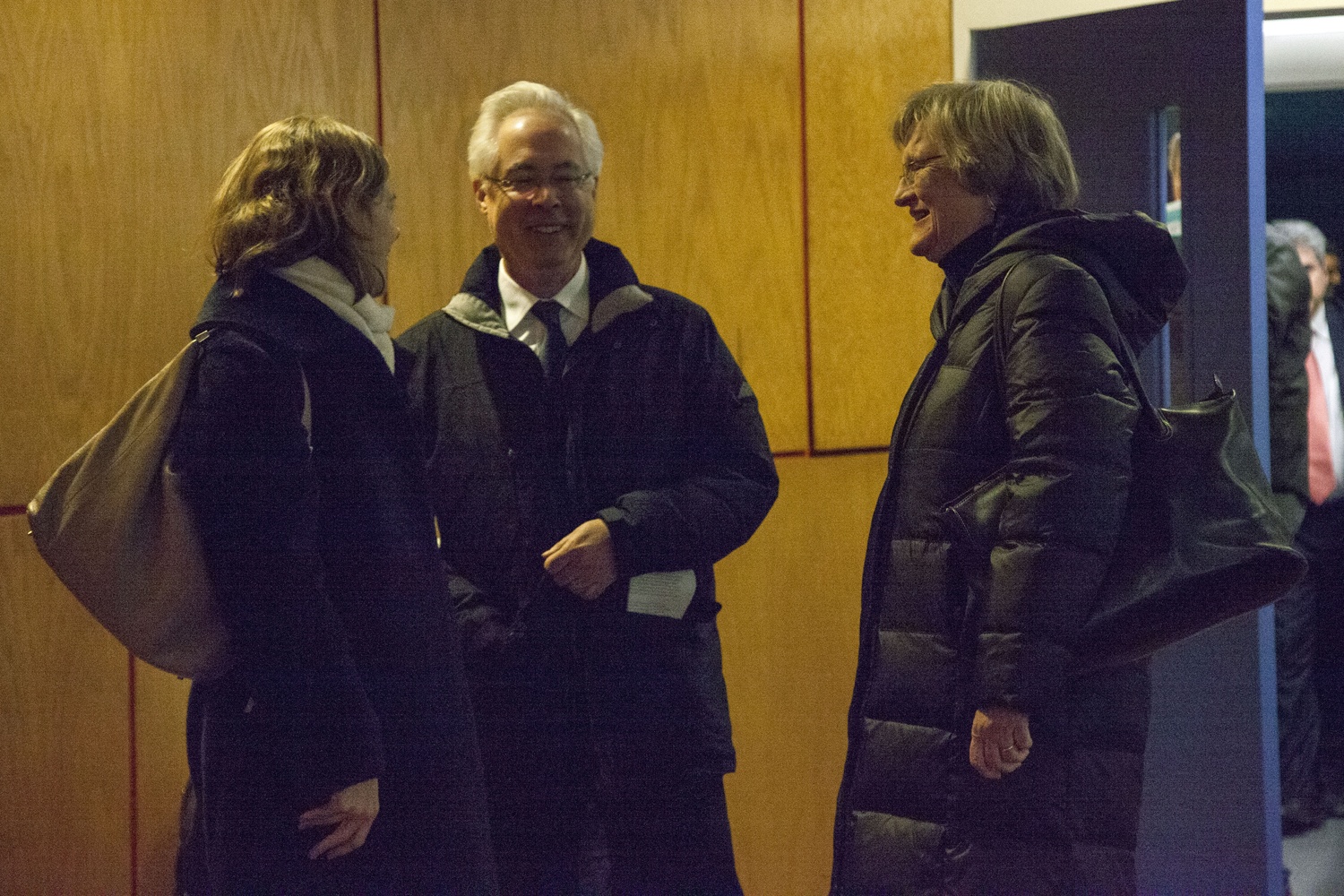 Biology professor David A. Haig—who became a major player in the sanctions debate this spring—said that the social group policy has caused “the most severe division within the Faculty that I’ve seen” since the short presidency of Lawrence H. Summers, although the current climate is not as heated as it was at that time: “Nothing compares to the Larry Summers years,” he said.

Summers assumed the presidency in 2001 and quickly began to butt heads with many members of the Faculty over his confrontational leadership style. After five years and controversial and highly-publicized remarks Summers made about women in the sciences, tensions boiled over. At a Faculty meeting in March 2005, a majority of the roughly 550 Faculty members present voted in the affirmative that “the Faculty lacks confidence in the leadership of Lawrence H. Summers.”

Eleven months later, in February 2006, Summers resigned, having lost the trust of the University’s largest faculty.

“It looked to me like the magnitudes of the rifts with certain segments of the Faculty of Arts and Sciences faculty were at a level where I thought it would be very difficult for us to advance on a whole set of fronts,” Summers said at the time.

Prior to the sanctions debates, too, Faust’s presidency was touched by uproar from the Faculty. In 2013, administrators authorized secret searches of resident deans’ email accounts to find the source of a leak of information pertaining to a wave of cheating in Government 1310: “Introduction to Congress.” After widespread Faculty criticism of the searches, then-Dean of the College Evelynn M. Hammonds resigned.

Both cases serve as institutional reminders of the power of the Faculty. And while Faust was surprised by professors’ interest in social clubs, there is significant precedent for Faculty involvement in student social life as well.

According to neuroscience professor John E. Dowling, Faculty members were involved in the creation of the Undergraduate Council, and other faculty committees focused solely on student social life, especially during the early 1980s.

Serving as chair of a committee that considered the benefits of randomizing house assignments in the 1990s, former Dean of the College Harry R. Lewis ’68—perhaps most vocal opponent of the sanctions— said he worked with “distinguished senior faculty” on the highly-controversial initiative.

“I spent a whole year selling people on the randomization decision which was very unpopular,” Lewis said. “Very unpopular with certain vocal students, just to be clear about that.”

Faculty have also had their hands in everything from determining ROTC’s place on campus to advising undergraduate clubs. Every year, the Faculty must approve changes to the student handbook—most recently, they approved a ban on vaping.

From ousting e-cigarettes to ousting presidents, Harvard’s Faculty has consistently asserted its role determining the direction of the University—but not always without a fight.

“Certainly we faculty, but the University as a whole, take faculty governance seriously,” Hochschild said. “That is the bedrock governing principle for the university.”

Administrators like Dean of the Faculty of Arts and Science Michael D. Smith—who have disagreed that Faculty members were not involved in crafting the sanctions—nevertheless wholly agree with it in principle.

“I’m a strong believer in faculty governance and the Faculty need to be thinking about what are the most important aspects of the learning environment that we’re building here on campus and how that affects student experience going forward,” he said.

'Some Kind of Diabolical Plot'?

Early last May, at a routine Faculty Meeting, the Faculty were busy discussing the development of the new program in General Education.

Then, just two days later on May 6, Faust announced that—starting with the class of 2021—members of single-gender final clubs, fraternities, and sororities would be ineligible to hold athletic captaincies, club leadership positions, or be recommended for certain post-graduate fellowships.

The policy, immediately explosive among students, soon caught the attention of the Faculty. On May 25, Lewis introduced a Faculty motion, signed by 12 professors, opposing the sanctions and asserting that “Harvard shall not discriminate against students on the basis of organizations they join.”

In a May 2017 interview, Lewis said that the sense of “ownership” faculty have over the University has diminished in the last few decades. He and others charged that professors should have been involved in crafting the initial policy.

“I think there’s been some change in the way the University administration relates to the Faculty, which is exacerbating that kind of sense that the faculty are players who can move their talents around and don’t have any particular loyalty to the institution,” he said.

In subsequent intense debates over the “Lewis motion”—and, by extension, the policy itself—at Faculty meetings in the fall, the issue of faculty jurisdiction over student social life came to the forefront. At the December meeting—held this time in the more capacious Science Center—English professor James Engell said the policy “threatens a constitutional fabric.”

In an interview later that month, Faust disagreed.

“I think Professor Engell kind of implied this might be the first step on a slippery slide to an erosion of Faculty rights and privileges and part of even some kind of diabolical plot to displace the Faculty’s rights,” she said. “It was not at all seen as intruding on some—by those who created the policy—as intruding on some space.”

At the time, Smith called the criticism that there was a lack of faculty involvement in the policy “categorically false.” In an interview this month, he stood by the characterization.

In a January interview, Faust said she believed that current debates arose from a misunderstanding between administrators and faculty members over the nature of the policy.

“We had sort of thought of it as a student life issue that came historically under the purview of the dean,” Faust said. “It got presented much more as a disciplinary sanctions issue and that alerted the Faculty to an area that they have long felt responsible for.” 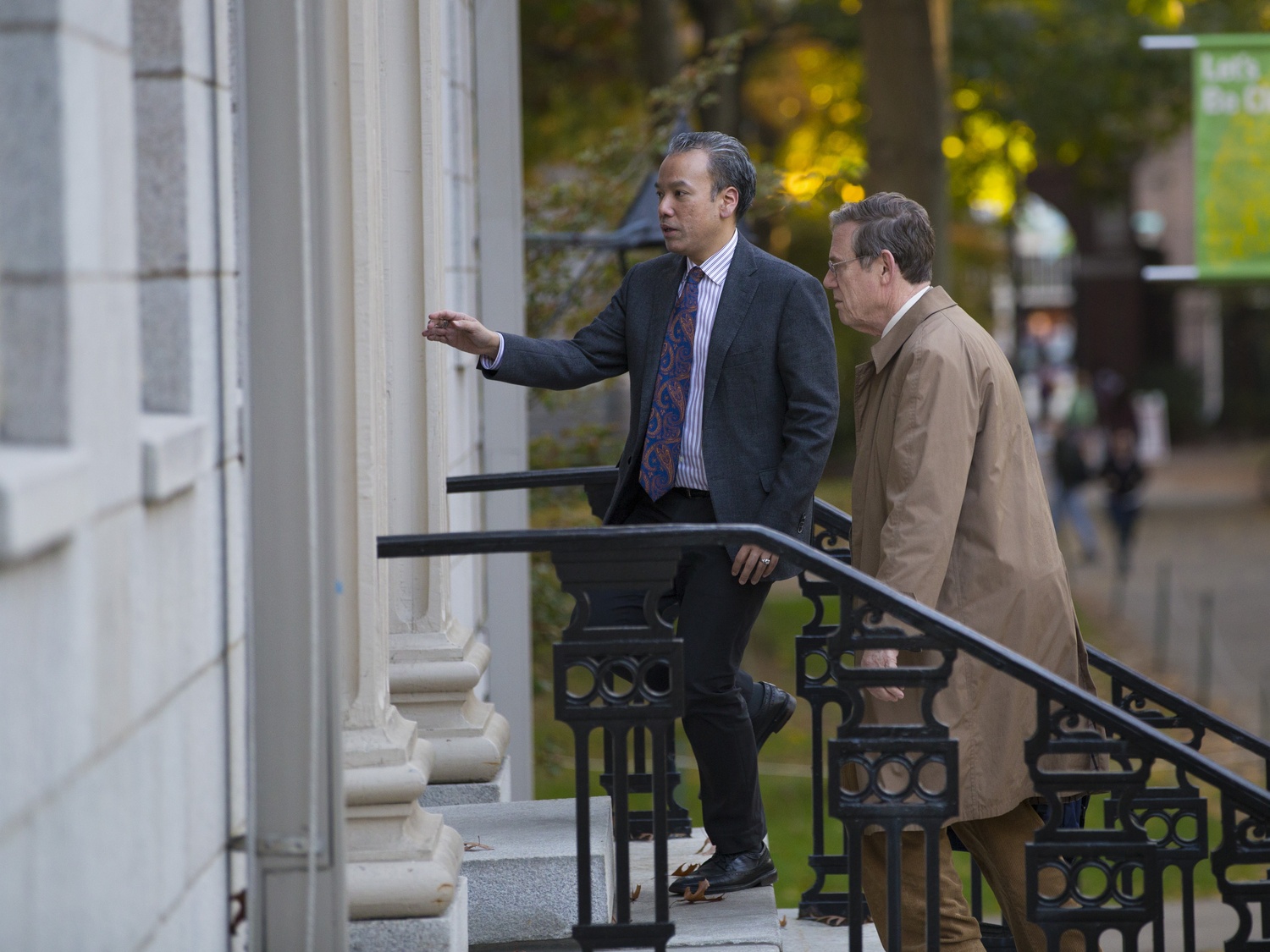 Smith said the Faculty have to decide which issues they want to spend their time on, and which they want to delegate to professional student life administrators.

One such administrator, Dean of Students Katherine G. O’Dair said she believes faculty governance at Harvard is “very strong.”

After the December Faculty meeting, a vote on Lewis’s motion was postponed and it seemed as though discussions about the sanctions would dominate meetings in 2017 as well. But shortly before the semester’s first Faculty meeting, Khurana announced the formation of a new committee with the power to revise or replace the sanctions.

In the hopes that the committee—comprised of faculty, staff, and students—would allow Faculty to adequately discuss the policy, Lewis withdrew his motion. For a moment, it seemed like the administration and the Faculty might have reached a governance détente.

“The faculty have made it clear that there are people out there that have some ideas about what they would like the faculty group to think about as ways to possibly improve the policy we have today. And I’d love them to get to work and to get back to us as quickly as possible,” Smith said of the committee in a February interview.

But two events in early March would forestall such a rapprochement.

One, Smith announced Khurana would co-chair the “revise or replace” committee with Music Department Chair Suzannah E. Clark, prompting concern among professors and forcing Smith to come to Khurana’s defense.

“The dean responsible for promulgating the policy is co-chair of this committee,” Classics professor Richard F. Thomas said at the meeting. “This leaves me again with an uneasiness.”

And two, a committee tasked with forming recommendations on how to implement the policy released its final report which suggested—among other things—that students sign a document affirming that they are not a member of a single-gender social organization. Khurana accepted nearly all of the committee’s recommendations.

On March 14, Haig—a member of the “revise or replace” committee—introduced a motion opposing the affirmation.

“The policy is being implemented in September and it has never come to the Faculty to a vote or serious discussion,” he said in an interview in May. “I see that as a problem of governance.”

At the April Faculty meeting, the Faculty voted to refer Haig’s motion to the “revise or replace” committee, rather than voting on it themselves. Haig said this decision was “inappropriate.”

Now, a year after the policy was originally announced and with roughly three months until it begins affecting undergraduates, the amount of influence the Faculty will have over its ultimate form is still uncertain.

But while Lewis and his supporters have been vocal about what they feel is an administrative overreach, outgoing Mather Faculty Dean Michael D. Rosengarten said that many Faculty members do not themselves have a sufficient understanding of student social life.

“As far as the faculty at the University, I don’t think they have an idea what’s going on unless they’re part of the House. So most of it happens at the level of Faculty Deans,” he said. “Some of the Faculty has no idea what’s going on in the Houses, and don’t understand the dimension of student life or the students.”

But while some are skeptical of the Faculty’s relevance to the issue of student social life, History and Literature lecturer Timothy P. McCarthy ’93 has no doubt its influence will be felt.

“The Faculty run the place and that’s always been the case and I think that will always be the case,” he said.