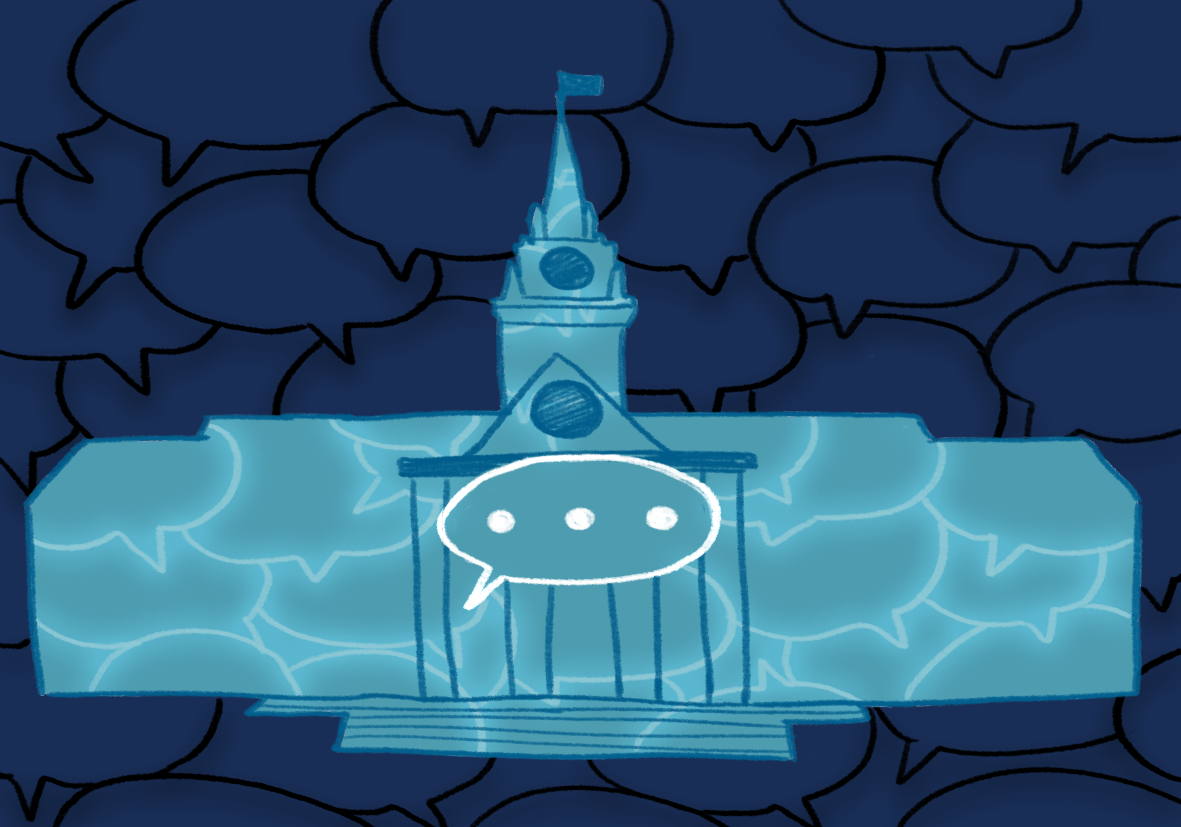 By Mai-Linh Ton
By The Crimson Editorial Board

This academic year has been dominated by debate—often diplomatic, often not—on free speech, a term which itself has rapidly become politicized. We have opined on the topic on numerous occasions, both when it has affected our own campus and when it has affected colleges across the nation.

We stand by our prior opinion: Not all speakers are equally worth hearing; all have the right to be heard.

We believe that controversial speakers have the right to expound upon whatever claims they desire—including those that we believe to be offensive and factually wrong. This is their right of free speech, and we wholeheartedly support it. Any infringement on any person’s speech, however odious that speech might be, is a threat to the free expression that has fueled our democracy.

We have seen far too many incidents of individuals with controversial beliefs facing violent protests upon their arrival. This March at Middlebury College, Charles Murray—the author of the book, “The Bell Curve,” which alleges that there are genetically-rooted intellectual disparities between different ethnicities—and interviewer Professor Allison Stanger were attacked by protesters after his speech. Stanger was hospitalized and later said that she feared for her life. In the face of these and other violent protests, we condemn such violence unequivocally. That we find Murray’s views patently offensive and bigoted makes, and should make, no difference. Hateful speech does not excuse retaliatory violence.

These incidents, however, are not themselves damning evidence that colleges are simply bastions of liberal privilege or that free speech is under siege. It is unfortunate that these protests are exploited by certain news outlets that choose to ignore the many respectful, peaceful, and law-abiding protests where students voice disagreement with a speaker. Indeed, the right to peaceably assemble is codified in the same amendment as the right to free speech. We urge those who object to the mere act of protest, including of a speaker whom one finds distasteful, to remember that protest too is an act of free speech.

Milo Yiannopoulos, for instance, is free to launch his tirades against Muslims, women, and African Americans—but he does not have an automatic right to be invited to continue those tirades at some of this country’s most well-respected institutions of learning. Certain speakers do not deserve the platform Harvard University offers, especially when their rhetoric runs antithetical to the values we should all hold dear.

We also believe that students should have the ability to engage in dialogue with controversial speakers. When the Harvard Financial Analysts Club invited indicted pharmaceuticals businessman Martin Shkreli, we criticized them for failing to allow open discourse by limiting the kinds of questions that could be asked and attempting to bar the press. Students and speakers alike would gain from an opportunity to challenge the views of one another. Free speech is made better and richer by a lively exchange of ideas. In short, we are in support of free speech, but not free rein.

For students and others who disagree—sometimes vehemently—with those invited, we encourage nonviolent, legal protest. Those who have time and again proven themselves to be peddlers of hate and cruelty should have to defend their views as the price of a Harvard lectern. Individuals and events that will challenge the beliefs of controversial speakers and students are central pillars to keeping both accountable. Without student activism, speakers could espouse hateful rhetoric that often contradicts the norms we share as a campus. It is paramount that controversial speakers—on both the left and the right—are met with contradictory student voices.

We acknowledge that often the burden of confronting objectionable views falls on members of the student body unequally. In particular, students who feel that their identity or culture are routinely attacked may feel uniquely hurt by a speaker who questions an intrinsic part of who they believe themselves to be. Racist or sexist rhetoric, for example, would be more shocking to those who have never heard such views expressed than students who belong to the marginalized groups in question and are intimately familiar with those kinds of hateful speech.

All students, not just those who feel under attack, should step up and challenge speakers who question or attack their peers’ identities and cultures. It can be difficult and exhausting to be constantly forced to defend inherent things about oneself, especially traits that are immutable. The debate over free speech offers an unique chance for all to support and encourage constructive speech and discourage the politics of hate.

Campus organizations should likewise resist the urge to invite a contentious speaker purely for the sake of generating controversy. Speakers such as Milo Yiannopoulos have previously engaged in tactics we find offensive, such as outing a trans-woman at the University of Wisconsin-Milwaukee. Others, such as Martin Shkreli, have been arrested for securities fraud and are unlikely to offer helpful (or lawful) financial advice to the Harvard Financial Analysts Club. It seems the primary purpose of inviting such speakers is an organization’s selfish desire to generate publicity and controversy.

This does not and should not mean universities should aim to foster a particular political ideology on their campuses. We welcome the invitation of a diverse range of voices, and indeed believe that many colleges could benefit from hearing more conservative speakers. Instead, we question the decision of many student groups to invite hatemongers—either liberal or conservative—in the name of academic diversity. These speakers do not well represent any school of thought and have built careers on being mere provocateurs. If a student group makes the choice to invite that guest to campus, they have a right to do so, but they should not go unquestioned in making that choice.

The Constitution’s protections of speech are broad and expansive, yet the desirable and the Constitutionally-protected do not always align. That the First Amendment protects the freedom of young children to curse, of politicians to lie, of conspiracy theorists to peddle their tales, and even of neo-Nazis to march does not make any of those things desirable.

To us, the caliber of speakers invited to our campus sends a message about what views are accepted and acceptable. When speakers are intellectually lazy, unnecessarily cruel, or outright vindictive, they sanction that type of behavior as encouraged. The proper response is not to stifle their voices by physically barring such speakers or shouting them down. If invited, they must be allowed to come.

Yet it is perfectly within the boundaries of free speech to be thoughtful in those we invite. Much the same way, one’s acceptance of admission to the College indicates an acceptance of the diversity of backgrounds and opinions here, including those widely different from our own. That is the beauty and benefit of a school like Harvard. It requires being empathetic with and thoughtful about our peers, including when making decisions about who to invite to campus as a speaker.

The freedom of speech is a national treasure, one of the founding ideals of American democracy, and the bedrock of a free press. Indeed, these pages are made possible by those principles. Yet to preserve and protect free speech requires effort and care. To cultivate rich and educational discourse demands still more consideration. It is up to the members of this community—Harvard’s students, faculty, administrators, staff, and alumni—to work to build the conditions that will encourage thoughtful and productive conversations in pursuit of truth.