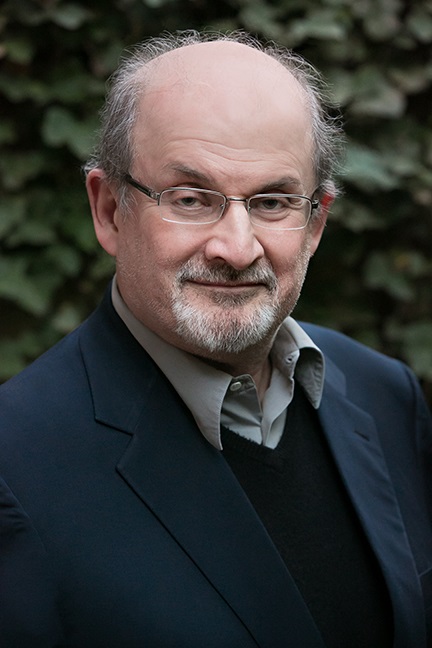 Harvard professor and Mahindra Humanities Center director Homi K. Bhabha opened his conversation with world-renowned author Salman Rushdie on Sept. 8 by addressing the “elephant in the room”: similarities between Nero Julius Golden, protagonist of Rushdie’s new novel “The Golden House,” and President Donald Trump. The passage Rushdie read to begin the evening was a description of Golden—a septuagenarian real estate tycoon from Bombay with a “loud, animal quality” and “large, dangerous hands.” When asked whether the inhabitant of the Golden House was Trump, Rushdie deadpanned, to laughs from the packed house at the First Parish Church, “He’s not—he’s much more interesting. And he has a different relationship with his hair.” Despite a conversation laden with heavier themes, Bhabha and Rushdie continued to exchange quips, from Bhabha’s opening joke that “It’s wonderful to see you in a church again” to fun poked at Norman Mailer.

“The Golden House,” Rushdie’s thirteenth novel, follows the Golden family, Indian immigrants living in a secluded mansion in Greenwich Village, through the eyes of their neighbor, René. (Rushdie insisted that René is not Nick Carraway, although René actually mistakenly identifies with Nick Carraway in the novel.) The self-proclaimed “gangster novel” explores not only New York and America but also, through the dark presence of the Indian mafia that the Goldens fled, crime, politics, and power in contemporary India. The resonance between Golden and Trump seems an unintended byproduct of Rushdie’s ambitions for the book as a “big social novel.”

“The Golden House” diverges from its predecessors in having what Bhabha described as a “Balzacian density” of realism, but Rushdie’s novels have always lived at the nexus of politics and fiction. “Shame” and “Midnight’s Children” depicted, through their particular style of magical realism, the independence movement and Partition of India, respectively. Rushdie’s 1988 novel “The Satanic Verses”—as one is reminded every time Rushdie’s name comes up—was regarded as blasphemous by many Muslims and led the supreme leader of Iran to pronounce a fatwa, or death sentence, on Rushdie. One of the pre-selected audience questions that concluded the night, alluding to the fatwa and Rushdie’s vocal support of free speech, asked: “How do you suggest we counter extremists who use the guise of free speech to hold rallies that incite violence and hate? Where do you see the line between free speech and hate speech?”

Rushdie responded that he had “changed his mind three times” since the riots in Charlottesville, having initially disagreed with the ACLU’s decision to defend the white supremacists’ freedom of expression. “Now I think maybe they’re right, because it’s better to know who the assholes are,” Rushdie said wryly. “[T]hey were not rocket scientific because they didn’t put their hoods on, so we can find out who they were and deal with them.”

Despite starting and ending on explicitly political notes, Bhabha and Rushdie maneuvered throughout the evening to discuss the ways in which fiction can uniquely enrich our understanding of contemporary events. In “The Golden House,” Rushdie sets a characteristically globe-spanning stage, abundant with contemporary cultural references to Greek tragedy. Bhabha described the geographic juxtapositions and dense allusions as aspects of Rushdie’s myth-making, and Rushdie noted that the novel’s depiction of an individual’s collapsing faith against the rich background of various mythologies perhaps echoes the discord in our current cultural mythologies, where contentious issues like the American presidency or Kashmir are “described in such radically different language that there’s no meeting point.”

To bridge and reframe seemingly unrelated places and stories is something the novel is uniquely well-adapted to do, according to Rushdie. “The novel is not a good place for received ideas,” Rushdie concluded. “[I]t’s skeptical, it deconstructs people’s realities.” The abundant realities in Rushdie’s fiction are products of his own migrations, from India to London to America. In one of the most uplifting moments of the evening, Rushdie highlighted the ways that the newest generation of American immigrant authors are wielding fiction’s reality-changing powers to reshape the country’s literature and self-conception. Junot Díaz, Yiyun Li, Nam Le, and Jhumpa Lahiri, among others, are, in Rushdie’s words, “bringing into American literature a knowledge of the world which American literature historically hasn’t possessed and an enormous enrichment of the literature of this country.”

Familiarity with and personal relationships to Rushdie’s life and work brought many audience members to the event. Naman Patel, a researcher at Harvard Medical School, said that “Midnight’s Children” had helped him come to terms with his identity. “As far as understanding myself and my childhood, the animosities and hostilities—Rushdie helped me understand the Partition.”

Yasmine Flodin-Ali, a graduate student at Harvard Divinity School, said that she wished he had talked even more about his relationship to his inherited Muslim identity, and “the fact that he doesn’t identify as a believer, but that in the current climate he is seen as a Muslim despite that.” Overall, however, she was impressed by Rushdie’s candor: “I liked how unapologetic he was today and in his work about transcending boundaries. His answer about the boundaries of free speech was very honest; he was human in his response.”

Audience member Eric M. Fell, a scientific researcher in Boston, felt pleased by the political overtones in the conversation: “I think he really talked about what people wanted to hear: tensions in the world and how that affects people from different cultures and communities.” He expressed optimism about “The Golden House” and Rushdie’s future work: “The way he’s lived his life, a book could already be written. He has so much more to tell, I think, and it’s inspiring.”