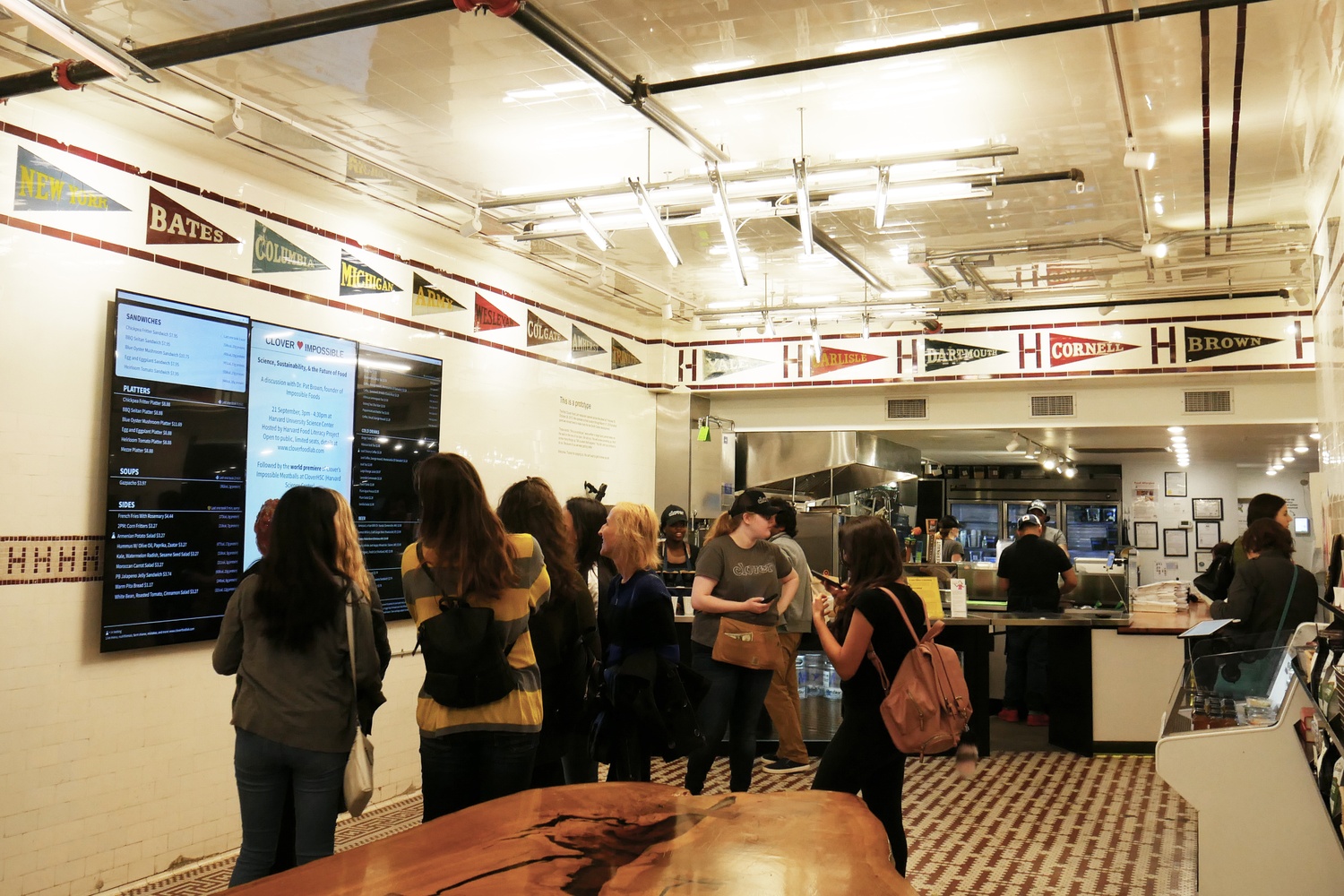 Vegetarians at Harvard can now eat meat. Or at least something like it.

Beginning today, Clover Food Lab locations in Harvard Square will sell a sandwich featuring a soy-based “meatball”—a chunk of the “Impossible Burger,” an environmentally-friendly, vegan alternative to the traditional hamburger. The product was the subject of an event Thursday hosted by Patrick O. Brown, the founder and CEO of Impossible Foods, which sells the Impossible Burger.

Clover Food Lab, which recently opened a new location in the Science Center, will be the company’s first vendor in Massachusetts.

Impossible Foods has faced regulatory hurdles as it seeks to brings its genetically-engineered “meat” product to a wider market. The Food and Drug Administration has yet to approve the usage of one of the product’s key ingredients, soy leghemoglobin, which produces a protein called heme and gives the burger its meat-like taste. According to internal FDA documents obtained by the ETC Group, the FDA “believes the arguments presented, individually and collectively, do not establish the safety of soy leghemoglobin for consumption.”

At the event, Brown sought to downplay any risks associated with the ingredient. “From a biochemical point of view…..[there] is zero incremental risk,” he said. He added that “everyone eats thousands of different heme proteins in their diet every single week.”

Following the event, attendees were given the opportunity to taste the company’s invention across the hall at the Science Center Clover. Several attendees at the post-event tasting session said they liked the company’s product, but had differing opinions over whether its taste and feel resembled that of real meat.

Henrique V. G. Vaz ’18 said he enjoyed the meatballs, but highlighted their clear different from real meat. “As long as it tastes good, it’s fine. It doesn’t need to taste exactly like a hamburger,” he said.

Elizabeth N. Gummer ’21 said the meatballs tasted “exactly” like meat, despite what she deemed to be over-seasoning.

In its six years of existence, Impossible Foods has garnered over $250 million in investments and has expanded to over 50 restaurant locations across the United States. Although its product is not yet available online or in grocery stores, the company recently opened a new production facility which will produce over a million pounds of product per month at full capacity.

Brown sought to temper expectations of a wide expansion of the Impossible Burger across the country in the near future, though.

“Let’s remember that even at full capacity, we will still be producing less than one-tenth of one percent of U.S. ground beef production,” he said.

Paramount for the company right now is “establishing that beachhead and building our own brand,” said Brown.

By 2035, the company aims to have “completely eliminated animals from the food system.” And Brown seems fully confident in his company’s capacity to achieve that objective: “Ours is getting better everyday while the cow’s is not,” he said, referring to the Impossible Burger.