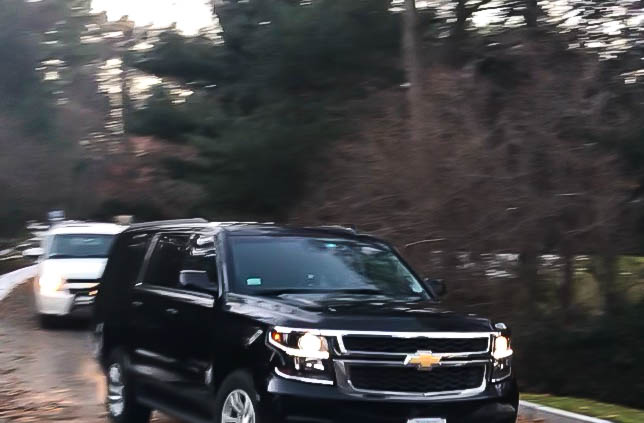 BELMONT, MASS.— Members of the committee searching for Harvard’s next president convened secretly at the Belmont, Mass. home of a committee member Saturday, spending almost the whole day in private discussions as they prepare to make a final choice in the coming weeks.

The meeting—held at the home of Overseer and committee member Tracy P. Palandjian ’93—stretched for roughly seven hours, beginning around 10:30 a.m. and lasting until about 5:30 p.m. Crimson reporters identified at least three members of the search committee—David M. Rubenstein, Joseph J. O’Donnell ’67, and Susan L. Carney ’73—as they exited the meeting. Roughly a dozen total people left Palandjian’s house when darkness fell at the end of the day, sometimes sharing vehicles.

The committee—comprising all twelve members of the Harvard Corporation and three members of the Board of Overseers—has been seeking a successor to University President Drew G. Faust since she announced over the summer she plans to step down in June 2018. Though committee members have repeatedly declined to discuss the search publicly, The Crimson reported in Dec. 2017 that the searchers had narrowed their shortlist of candidates to under 20 names.

Twice over the course of the day Saturday, large SUVs with tinted windows pulled into Palandjian’s long, concrete driveway, making the turn past a green mailbox with a “HAPPY BIRTHDAY” balloon. The SUVs discharged their passengers out of sight of the road and remained by Palandjian’s house for roughly three hours before driving away.

Senior fellow of the Corporation and search committee chair William F. Lee ’72 declined to comment on whether the committee interviewed candidates Saturday. He did not respond to a question asking about the identity of interviewees.

“Bill does not have a comment to offer at this time,” University spokesperson Melodie L. Jackson wrote in an emailed statement on his behalf Monday.

Former search committee member Charles P. Slichter ’45—who chaired the search that resulted in the selection of former University President Neil L. Rudenstine—told The Crimson in 2001 that January is the month when Harvard search committees get “in the thick of things.”

“You have at least one person meet them firsthand, then possibly move to a stage where several of the people do,” Slichter said. “Then we worked down to a small number—four or five people—where almost all of us met with them.”

Those in attendance Saturday took measures to keep the meeting secret. When driving in and out of the building, several attendees covered parts of their faces with their hands or their clothing.

Multiple hired drivers declined to disclose the names of the individuals they were employed to chauffeur as they turned into Palandjian’s driveway. One, though—who arrived driving a Tesla—said he was in Belmont to pick up “Scott.” Scott A. Abell ’72, the president of the Board of Overseers, is one of the three Overseers who sits on the search committee.

Throughout the day Saturday, a man wearing a red baseball cap and a grey Vineyard Vines t-shirt sat idle in a grey Ford Fusion near the entrance to Palandjian’s driveway and within 100 yards of Crimson reporters posted in the street. Lee declined to answer a question asking whether the man in the baseball cap was parked on the street for security reasons.

When asked what he was doing Saturday, the man repeatedly refused to answer.

Roughly 15 minutes before the meeting appeared to disband, the man turned on his lights, made a three-point turn, and drove away.