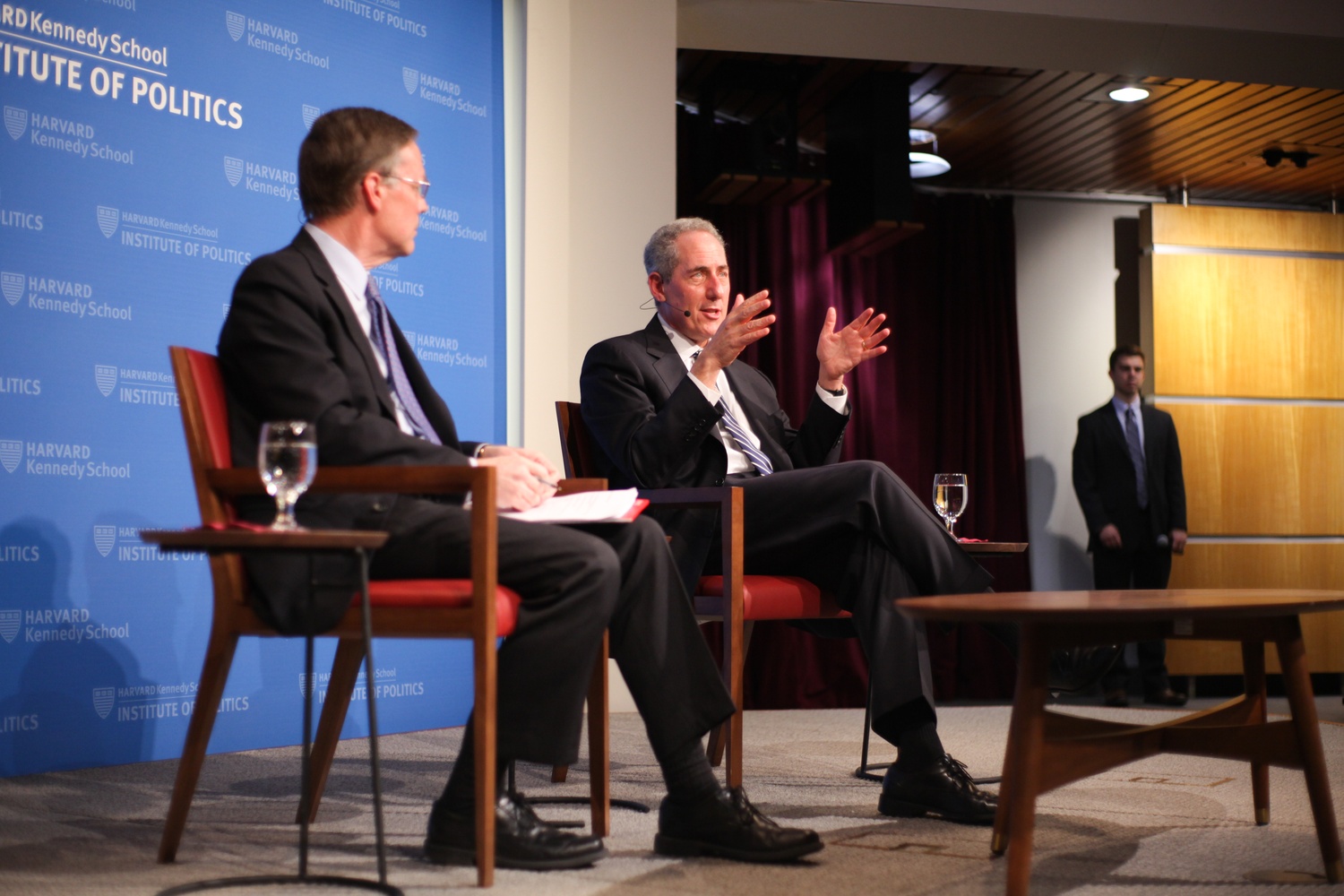 Michael B. Froman fields questions at Tuesday night's event at the IOP. By Kai R. McNamee
By Alexandra A. Chaidez, Crimson Staff Writer

Speakers included Michael B. Froman, who was the U.S. Trade Representative during the Obama administration, and Kennedy School Professor R. Nicholas Burns. Burns previously served as Under Secretary of State for Political Affairs from 2005 to 2008.

Froman also discussed the effects the Trump administration’s foreign policy might have on the reputation of the U.S. government overseas.

“I think we’ve gone from what Madeleine Albright used to call the indispensable nation to being relatively isolated as a nation, and I worry we are on our way to becoming an irrelevant nation where other parties say ‘we’re just going to wait this administration out,” Froman said. “We can wait three years, maybe seven years, but at least three years, and see what the next administration’s policies are before we really engage.”

Summers, who gave the opening remarks, specifically mentioned the Trans-Pacific Partnership (TPP) and Trump’s criticism of the agreement when introducing Forman.

“[Forman] was the leading champion of perhaps most notably, the Trans Pacific Partnership, an agreement that I believed had enormous potential to advance US economic interests, but it must be said, an agreement that was repudiated by the last four standing for President of the United States: Bernie Sanders and Hillary Clinton on the Democratic side, and Ted Cruz and Donald Trump on the Republican side,” Summers said.

TPP is a trade deal negotiated by the Obama Administration which included the United States, Japan, Mexico and various other countries. During his first day in office, Trump signed an executive order removing the U.S. from the agreement.

“I don't think damage is permanent. Damage to our reputation about being a reliable partner is hard to recover from, and I think it’s going to take several administrations to try and recover from that,” Froman said.

Attendees said that they thought the event was informative and “detailed.”

Lillka Cuttaree, a graduate student at the Kennedy School who attended the event, said she was interested in the subject because of her international origins.

“I had a specific interest in that because I come from a very small country in Africa—Mauritius—so I’m a bit worried by the way the trade policy is shaped by the current administration,” Cuttraee said.

—Staff writer Alexandra A. Chaidez can be reached at alexandra.chaidez@thecrimson.com.