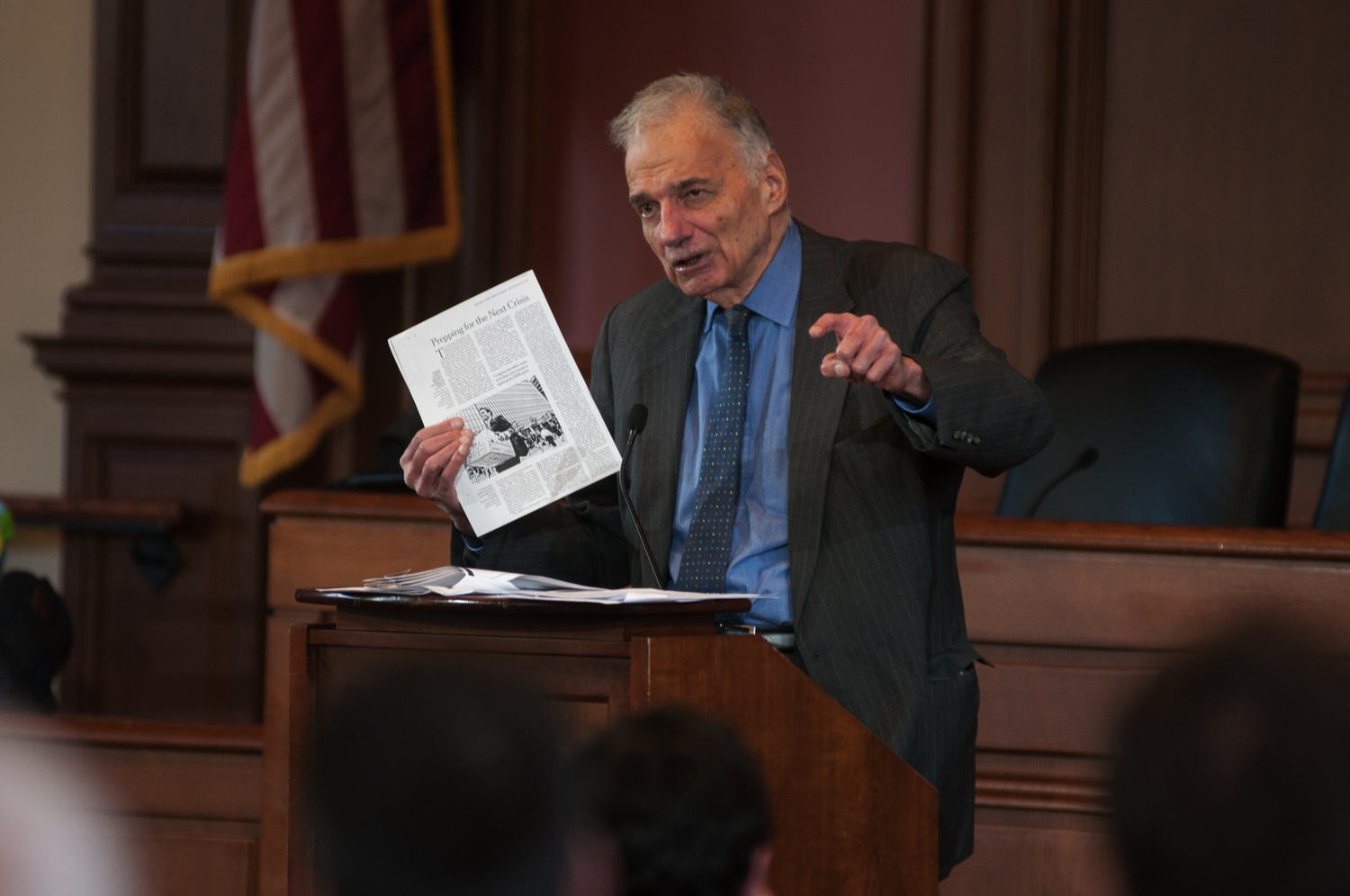 Former U.S. presidential candidate and attorney Ralph Nader spoke at the Harvard Law Forum Thursday to discuss the need for more public interest lawyers and his belief in Harvard Law School’s obligation to support public interest careers among its graduates.

Pete D. Davis ’12, the author of “The Bicentennial Crisis,” a book-length report that criticizes the Law School, joined Nader to speak in front of about a hundred people in the Law School’s Ames Courtroom in Austin Hall.

Introduced by Harvard Law Forum President Martin T. Drake, the speakers split the two-hour event to both critique the state of the legal profession in America and call current law students to serve the public.

Public service and its connection to the Law School has been an ongoing discussion over the past year. In February, Davis and four Law professors held a forum titled “Harvard Law and the Public Interest” to debate the school’s perceived disconnect with public service. Nader has been an active participant in the discussion as well — criticizing the Law School for its “corporate” focus at an event last year as well as in an open letter with six other alumni to Law School Dean John F. Manning ’82 published in April.

At Thursday’s event, Davis enumerated the history of public interest law participation at the Law School and described his vision of a majority of Law graduates working in public interest careers. The proportion of graduates entering public service law positions stood at 16.87 percent among 2017 graduates.

“Does the mother getting evicted from their house care that we created a bunch of Supreme Court clerks?” Davis said. “Seen through the eyes of America, we risk irrelevance… When our grandkids ask what we did, we want to tell them we advanced the legal interest of the many rather than entrenched the power of the few.”

Davis pointed to the discrepancy between the proportion of students who enter the Law School wanting to work in the public interest and those who graduate with a job doing so.

“Something is changing you while you’re here,” Davis said.

Following Davis, Nader first spoke about lawyers’ need to promote of the rule of law to defend justice. Nader accused the Law School of failing to promote justice in its practices, instead producing graduates who bend to corporate interests.

“We definitely need you, for without the law, what is there? Without the law, there’s no justice. Without justice, there’s no liberty, there’s no freedom, there’s no suppression of violence, which is everywhere–– domestically, locally, nationally, internationally,” he said. “Harvard Law School has led the suppressing [of] the styles of violence that come from the rich of powerful and making you think that most of it comes from street crime and domestic crime.”

Law School spokespeople were not immediately available to respond to request for comment late Thursday evening.

Nader finally called on the listening law students to enter public service themselves, encourage others to do so, and advocate for change at the Law School to emphasize public interest.

“I ask you to liberate your minds and your imagination and have a high expectation of yourself,” he said. “If we don’t redistribute the deployment of lawyers in this country from favoring the few to the control of the many, our profession deserves its ranking in the polls year after year.”

“He’s just been a very supportive voice in the work that The Record does,” Thoreson said. “I think that he made a lot of salient points about the failures of this institution as well as the power that this institution has to change some of the problems in the legal landscape.”

Laurel A. Petrulionis said she was "inspired" by the end.

“I came to law school to make a difference in the world, and through orientation the student government really pushed this notion of challenging the corporate pull,” Laurel A. Petrulionis said. “I’m actually lucky that I’m getting a lot of these paradigms challenged in my 1L curriculum but it’s something that’s going to take a critical mass, and I’m inspired to see that there’s a movement happening right now.”