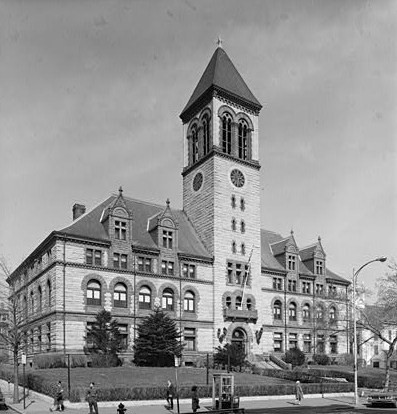 Cambridge City Hall in the 1960s, around the time Jane Britton '67 was murdered.
By Iris M. Lewis, Crimson Staff Writer

Jane Britton ’67 was studying at Harvard as a graduate student when she was bludgeoned to death in her apartment in 1969 — and on Nov. 20, just months from the 50th anniversary of the murder, the Middlesex County District Attorney’s Office announced they had identified a suspect in the case.

The possible perpetrator is Michael Sumpter, a man the District Attorney’s Office dubbed a “career criminal” in a press release last week. Sumpter died of cancer in 2001 after spending years in prison for committing rape in 1975. He has been posthumously linked to five sexual assaults, three of which also involved the murder of the victim.

Britton's murder took place early on a 1960s January morning. She had spent the previous night out with her boyfriend and several other Harvard classmates; the group ate at the Acropolis Restaurant, after which the couple went ice skating at Cambridge Common.

Shortly after Britton returned to her apartment, she was sexually assaulted and hit with a blunt instrument until she died. Her boyfriend found her body the next day.

The District Attorney’s Office wrote in its press release that it is likely Sumpter entered through a window, committed the crime, and fled the scene. Middlessex County investigators said they made headway in the decades-old mystery via new DNA testing and analysis; it is the oldest cold case prosecutors have ever solved.

Cambridge City Hall in the 1960s, around the time Jane Britton '67 was murdered. By Courtesy of Wikimedia Commons

District Attorney Marian Ryan said in the press release she has few doubts that Sumpter — a man with no previous connection to Britton — is the culprit.

“Today I am confident that the mystery of who killed Jane Britton has finally been solved and this case is officially closed,” Ryan said in the release.

Britton was a graduate student of anthropology who specialized in Near Eastern archeology. A Crimson article published immediately after the murder noted Britton's friends described her as “attractive and extremely talented.” At the time of her death, she had already completed anthropological research in France and Iran.

Rebecca A. Cooper ’10, a former New Yorker staff writer currently working on a book about Britton's life and death, said many people involved with the case assumed the perpetrator had also boasted ties to the Harvard anthropology department.

“There were elements of the crime scene which looked like a recreation of a burial ritual,” Cooper said. “People thought that it was a direct reference to things that she was studying or that were being taught in class.”

Now, though, the crime appears to be what Cooper called a “brutality of randomness.”

Because Sumpter is already dead, his identification as a suspect will have few direct ramifications. Cooper noted, though, that finally getting some answers may still provide comfort to Britton’s surviving family.

“I think there is solace in not having given up,” Cooper said. “After 50 years, they may not have closure — but they do have, hopefully, the mystery taken out of the horror.”

Most of Britton's close relatives are dead, but her bother — a vicar at a church in California — wrote in an email to the Boston Globe that "learning to understand and forgive remains a challenge."

“A half century of mystery and speculation has clouded the brutal crime that shattered Jane's promising young life and our family," Britton wrote. “As the surviving Britton, I wish to thank all those — friends, public officials and press — who persevered in keeping this investigation active, most especially State Police Sergeant Peter Sennott. The DNA evidence may be all we ever have as a conclusion."