It Was A Normal Tuesday Night. Then Scores of Harvard Students Dropped Their Underwear. 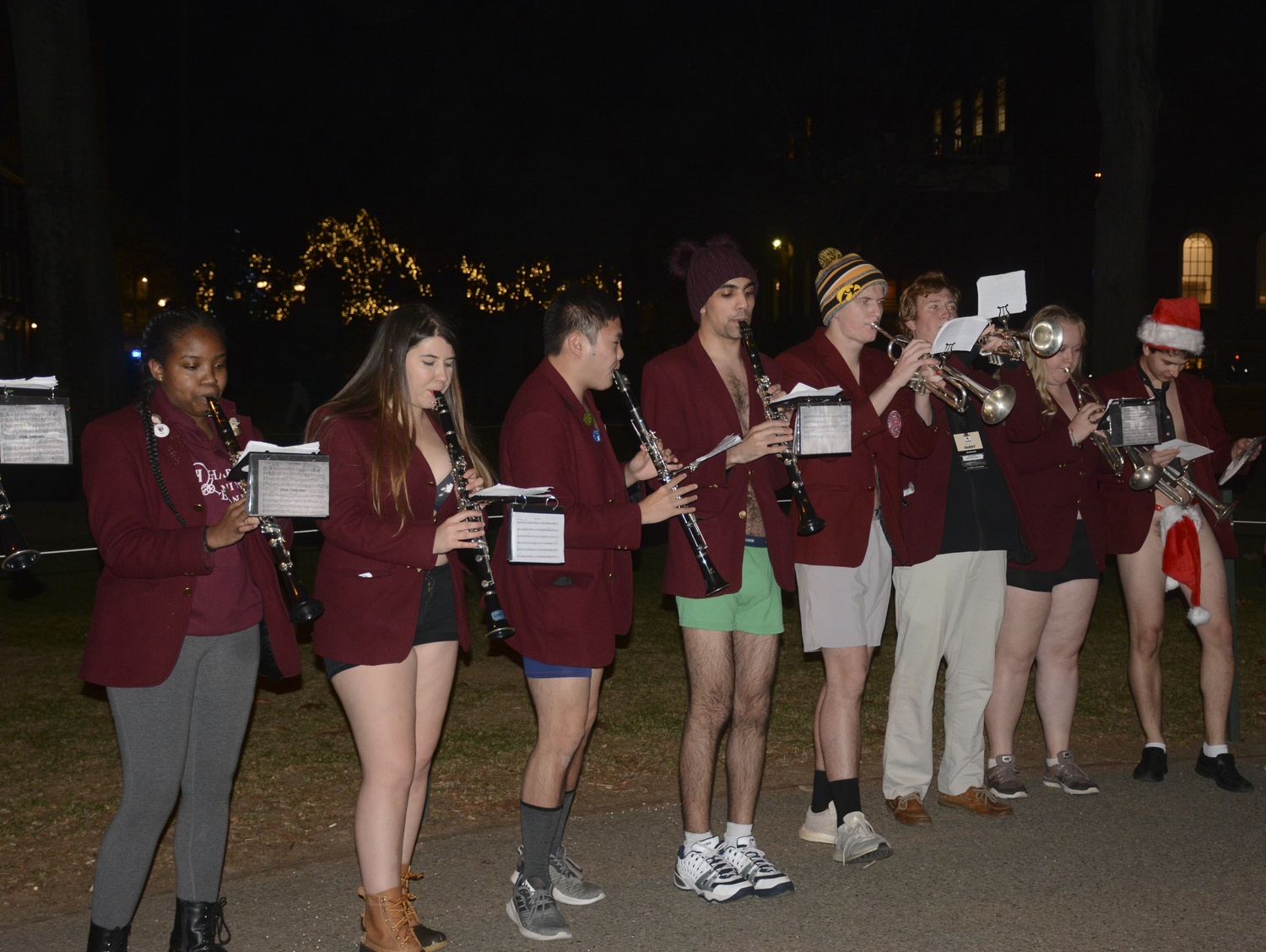 It was a normal Tuesday night. Then scores of Harvard students dropped their underwear.

The undergraduates unhooked bra straps, let towels fall from their bare bodies, and braved the chill of a 31 degrees-Fahrenheit Cambridge night to sprint a nude lap around Harvard Yard as part of the fall 2018 iteration of Primal Scream.

A biannual tradition, Primal Scream takes place at the end of reading period and just before the start of final exams in both the fall and spring semesters.

Each year, Harvard students face the same questions: Will they abstain totally, preferring warmth and unshrivelled dignity? Will they watch their peers pursue Primal prominence? Or will they themselves throw clothes and caution to the wind?

For Cameron M. Cashin ’22, the choice was easy.

“This is just a thing that everyone has to accomplish at one point in their career here,” Cashin said. “It’s always just something you want to get out of the way right in the beginning.”

In choosing to run Primal Scream early Wednesday morning — the lap, per tradition, kicked off at exactly midnight — Cashin joined a minor army of students ranging in age from fellow freshmen to seniors to a handful of alumni, who admitted they were alumni but declined to give their names. One student interviewed for this story tried to give a fake name (The Crimson chose not to include the interview in the article).

Cashin quickly disappeared into a sea of banana suits, shark heads, and — of course — birthday suits.

The swell of humanity chanted “USA!” and “Free the dick!” as they hurtled into the crisp evening air. The Harvard Band, some of whose members donned an atypical uniform of blazers and boxers, stood in front of University Hall — adjacent to the statue of John Harvard — to provide loud, proud accompaniment. 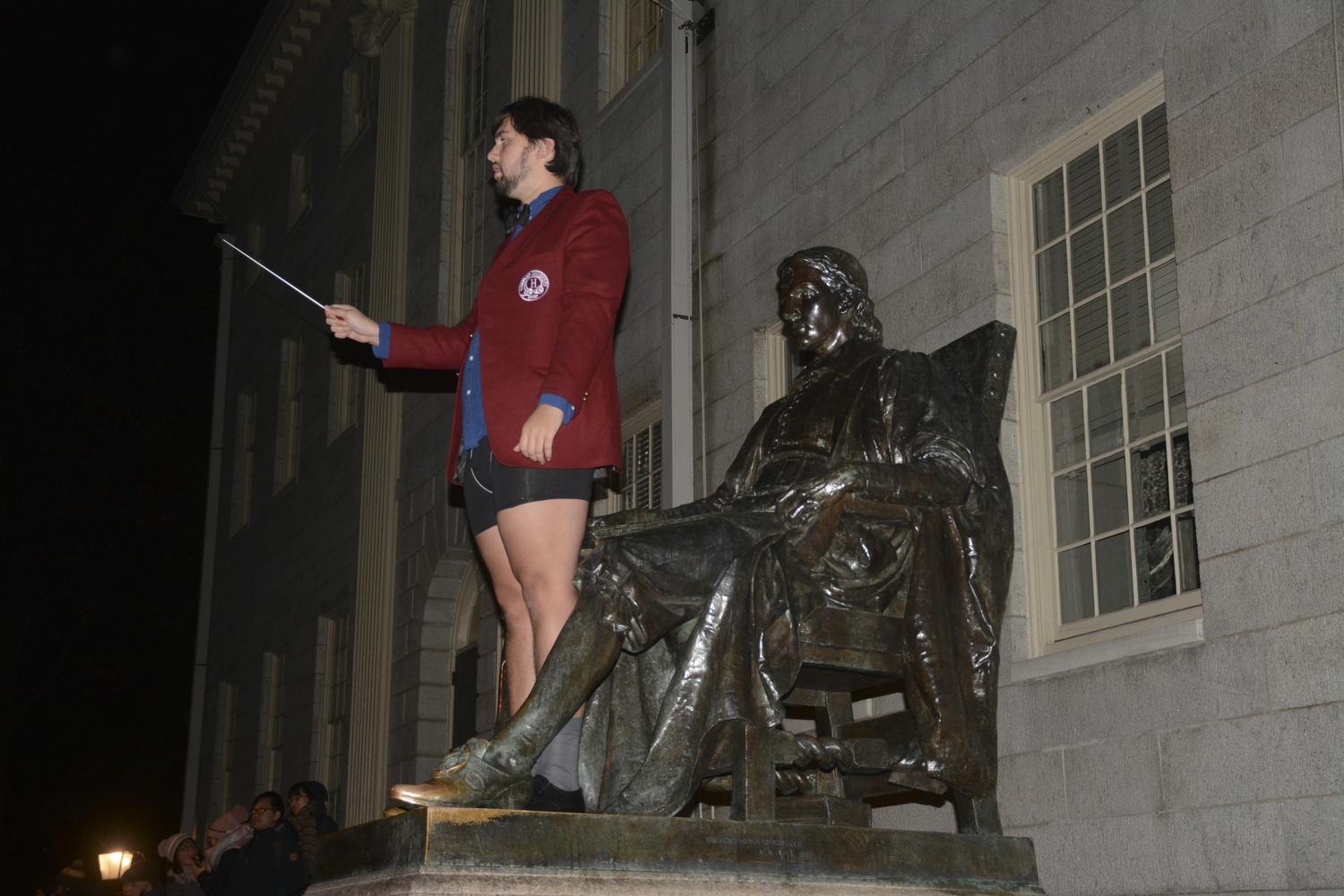 One member of the Harvard Band mounted the John Harvard statue to direct his peers during the fall 2018 iteration of Primal Scream. By Delano R. Franklin

Cashin said it all felt intoxicating. He said participants were “hyped up” and “amped up,” surrounded and goaded on by friends.

But he was less than thrilled with those students who opted to retain some portion of their undergarments as they ran through the Yard.

Henry R. Lynch ’20, another participant, said nudity really isn’t too bad. Once you start running, he said, you “don’t even feel the cold” because “body heat emanating” from the other sprinters keeps you “nice and warm.”

Lynch would know — it’s at least his second go-round. Lynch said he participated in Primal Scream his freshman fall but failed to do so last year, a decision he deeply regrets.

“It was great. I had missed it,” Lynch said. “I didn’t do it sophomore year. It was very sad. Good to return.”

One freshman effected a very different kind of return Tuesday night — straight back to his dorm room.

“Why would I want to watch naked people running around campus?” Noah P. Gold ’22 asked before walking into a freshman entryway.

Alison Chen ’22 — who chose to observe the spectacle — offered one possible answer: “Peer pressure is an incredible thing.”