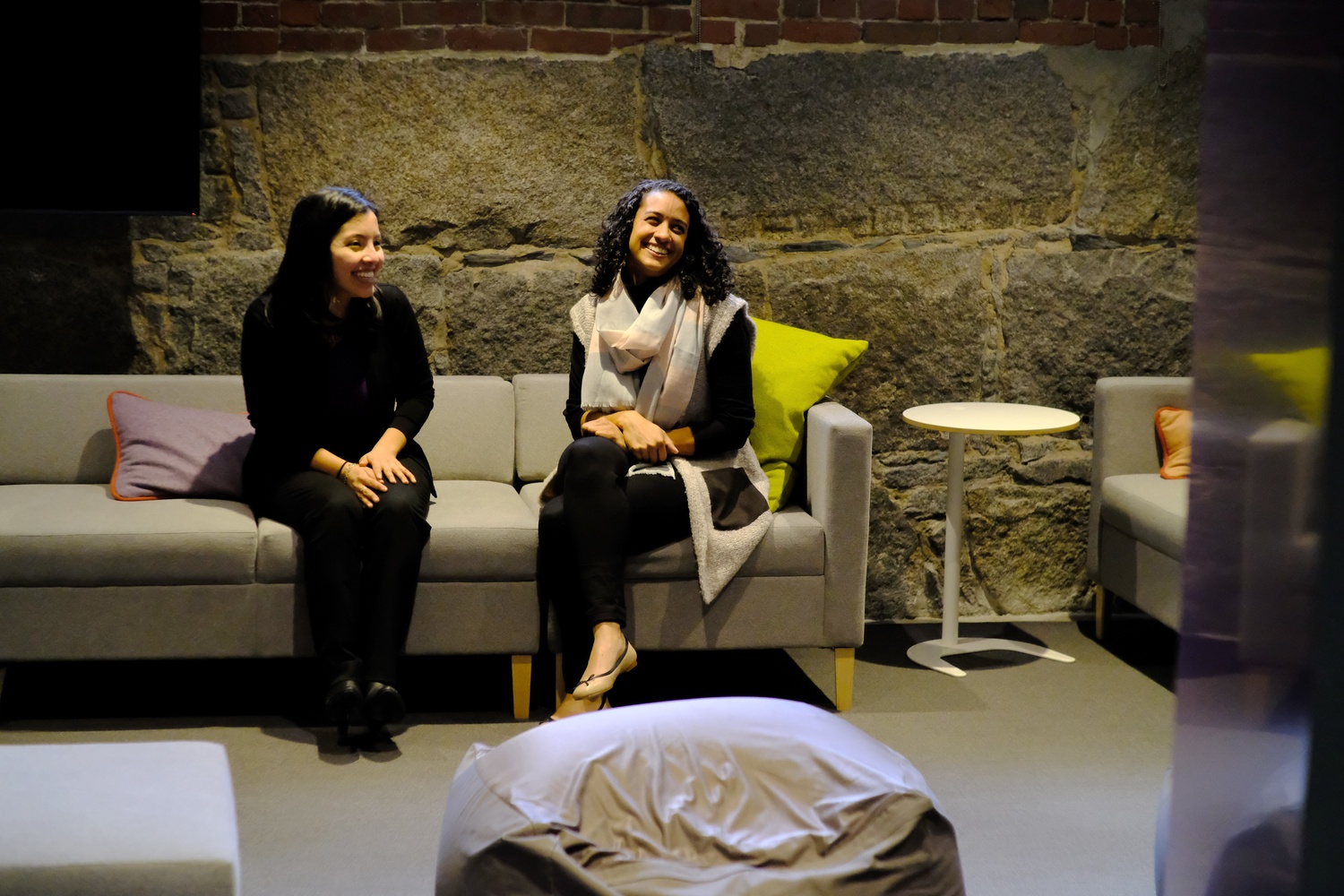 Grace Montero and Ileana Casellas-Katz relax in the common space outside of their office in the newly renovated basement of Grays Hall. By Griffin R. Andres
By Paula M. Barberi and Yasmin Luthra, Crimson Staff Writers

The Office for Equity, Diversity, and Inclusion and the Office of BGLTQ Student Life have begun moving into their new joint office space in the basement of Harvard Yard’s Grays Hall after nearly a year of renovations.

Construction began in the spring of 2017 and the basement project was officially completed at the end of the fall semester, though both offices are still unpacking boxes, according to Director of Diversity Education and Support Robin M. Johnson.

The space sports a kitchen, three all-gender bathrooms, a no-shoes “serenity room,” a library, a seminar room, and offices for staff and student interns, all connected by a walkway referred to as the “activity thread.”

“[The architects] were very intentional about creating this activity thread where students can sit and study or just hang out in general. There are outlets everywhere so that they can plug in their materials,” Sheehan D. Scarborough ’07, director of the BGLTQ office, said.

Though the offices are located in the basement of Grays Hall, the new space does not have a “basement feel,” Scarborough said. The architects incorporated student requests for open areas after feedback from a town hall meeting held last fall by both offices in anticipation of the move.

“Part of their plan was to excavate a lot of the dirt that was in front of the space and make this gradual incline, both that would be accessible for students in wheelchairs, but that would also feel inviting and not like you’re descending into a ‘dark space,’” Scarborough said. “It's fully accessible, which is also a reflection of our offices’ mission. We need to be and we are.”

Students working for the offices said they appreciate the new location in the Yard.

“It very much feels like we have an accessible place for people to come,” Diversity Peer Educator Sunah S. Chang ’20 said. “I think it’s good to have a centralized location on campus that students can associate with our work and our events.”

Ming Li Wu ’21, a programming intern at the Office of BGLTQ Student Life, said they noticed a significant increase in visitors following the move into the Yard.

“We have a lot more student traffic,” Wu said.

The Office of BGLTQ Student Life, founded in 2012, was first opened in the basement of Boylston Hall. The office temporarily moved to 7 Linden St. in 2016, sharing the space with the Office for Equity, Diversity and Inclusion and the Bureau of Study Counsel while awaiting the completion of the new space in Grays.

“Because we were just sort of in a temporary space in the Bureau of Study Counsel, we haven’t been able to take ownership of the space even though we really enjoyed being there and having the BSC as our neighbors,” said Patric C. W. Verrone ’18, a communications intern at the Office of BGLTQ Student Life. “Now that we have a space that is really ours and that we’re able to coordinate with EDI, we can really sort of imbue it with our own philosophy.”

Although the new space is already in use—student interns at the Office of BGLTQ Student Life held a study break in the library on Feb. 7—the offices plan to host official opening celebrations in the coming weeks.

“We're looking forward to planning an opening event for staff in the community as well as students. There is still some settling in to do, but we're moving pretty swiftly to do that,” Johnson said.

—Staff writer Paula M. Barberi can be reached at paula.barberi@thecrimson.com.