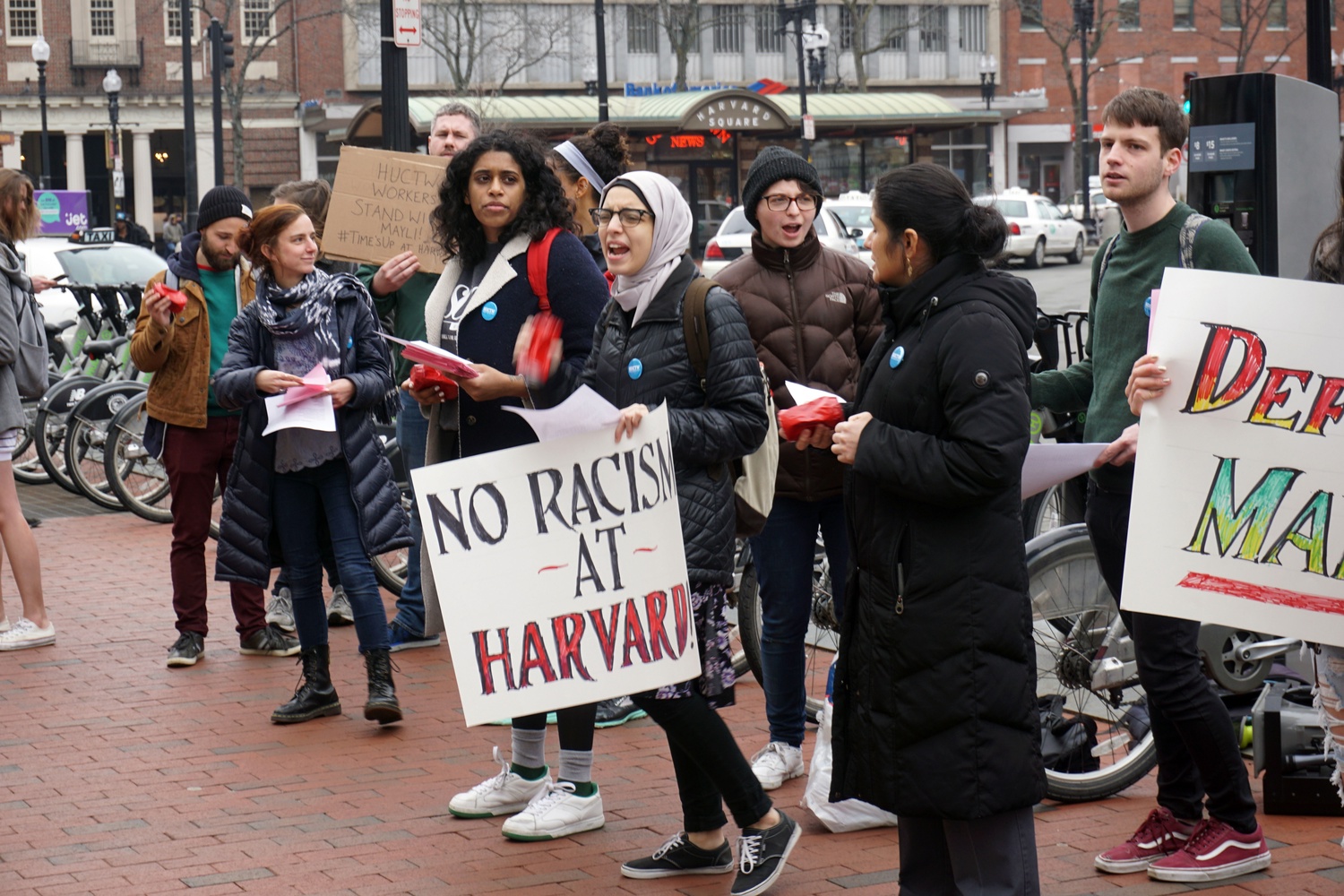 Wielding picket signs and bellowing chants, around 40 students and workers gathered outside the Smith Campus Center Thursday to protest the recent termination of Mayli Shing, a member of the Harvard Union of Clerical and Technical Workers.

Shing, a former employee in payroll and finance at University Health Services, lost her job on Feb. 6. According to HUCTW representative Geoffrey Carens, the goal of Thursday’s picket was to convince the University to reverse Shing’s termination, which demonstrators said they believed formed an act of retaliation in response to grievances she expressed at work.

“We want Mayli to be reinstated in a new job with a new supervisor—a full-time job, at least comparable to her previous position, with all the discipline removed from her file,” Carens said.

According to a Facebook post announcing the picket, some of the concerns Shing expressed included claims related to workplace racism and sexual harassment.

“As a matter of policy, we do not comment on individual personnel matters, but all complaints of discrimination and sexual harassment are investigated thoroughly and fairly,” University spokesperson Tania DeLuzuriaga wrote in an emailed statement Thursday. “Harvard is committed to maintaining a safe, comfortable, and diverse working environment for all of its employees.”

“We value the contributions of our employees, and have enjoyed a long and productive relationship with our campus unions,” she wrote.

The Harvard No Layoffs Campaign—a caucus of rank-and-file HUCTW members and allies—and the Student Labor Action Movement, a pro-labor undergraduate advocacy group, jointly organized the picket. Demonstrators handed out fliers to Massachusetts Ave. pedestrians explaining Shing’s situation and urging them to contact the University in protest. Carens said they estimate protesters reached about 300 passing pedestrians via this strategy.

For an hour Thursday afternoon, picketers marched in circles in Harvard Square, chanting slogans like, “Harvard workers under attack! What do we do? Stand up, fight back!” and “Hey Harvard, you should know, discrimination’s got to go!”

The event also received support from other labor groups on campus: Members of the Harvard University Dining Services union attended, as did representatives from 32BJ SEIU, the regional union that represents Harvard’s janitors, as well as individuals involved in the campaign to defend Harvard workers with Temporary Protected Status.

Undergraduates lofted signs alongside union members to support Shing. One participant, Noah R. Wagner ’18, wrote in an email to The Crimson that they think the University’s decision to fire Shing is “inexcusable and unacceptable.”

“I stand with Mayli as she continues to fight for dignity, respect, and her livelihood, and the Harvard administration should know that students and workers from across our community stand with her too,” Wagner wrote.