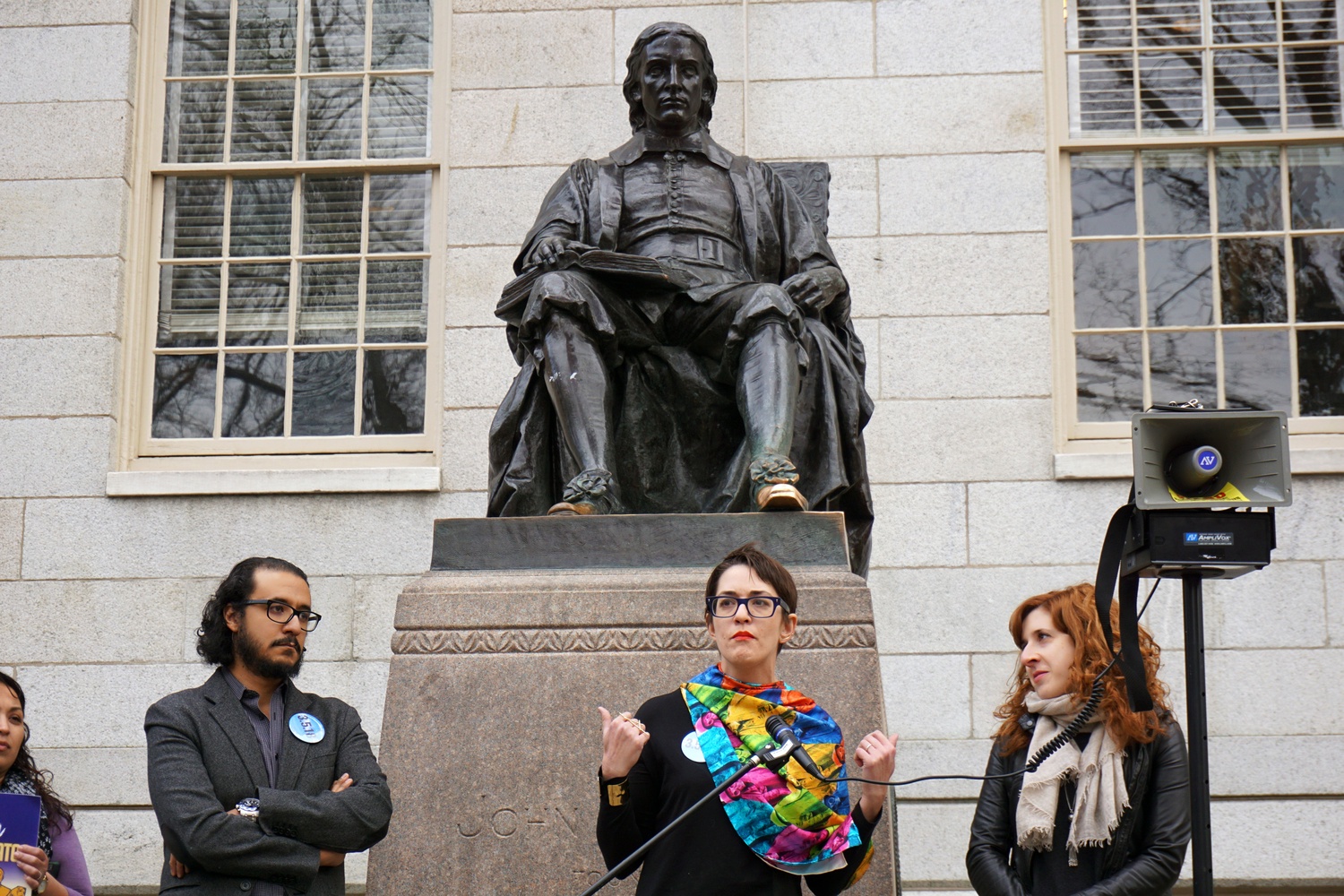 The rally was organized by the Harvard TPS Coalition—a group of workers who form part of some of Harvard’s campus unions—and its allied labor and student groups. Organizers sought to send a message that union workers and immigrants impacted by the Trump administration’s decision to terminate TPS benefits are “Here to Stay,” a phrase used to show solidarity against Trump’s deportation pledges.

The Trump administration recently chose to end the Temporary Protected Status program for immigrants from Haiti and El Salvador, among many other countries, affecting thousands of immigrants across the nation and dozens of Harvard affiliates.

Several representatives of different unions—UNITE HERE Local 26, 32BJ SEIU, the Harvard Graduate Students Union-United Auto Workers, and the Harvard Union of Clerical and Technical Workers—attended the event. The rally featured speakers from these and other co-sponsoring student groups that focus on immigration, labor issues, and communities of color.

Speaking to the crowd in front of the John Harvard statue, Geoff Carens, a member of the HUCTW, addressed not only TPS workers, but also DACA recipients.

“This issue is an attack on labor and on immigrants and we’re not going to be silent about it,” Student Labor Action Movement member Anselm Kizza-Besigye ’21 said.

“We’re going to keep fighting to support TPS workers here at Harvard and everywhere around the country to make sure they are safe and able to stay in their communities,” he added.

Towards the end of the rally, Harvard campus police demanded to see the identification cards of people at the rally, something that had not occurred in previous pickets, according to Carens.

“I’m not exactly sure why and they didn’t give us a good reason either,” Carens said. “And during the rally [police] also wouldn’t allow people to film or take videos on their phones without a permit.”

"Representatives from Harvard Public Affairs and Communication asked the parties to stop filming as they did not have a film permit," he wrote. "HUPD officers spoke to one of the student organizers at the end of the demonstration.”

Christine Mitchell, a student at the School of Public Health and a teaching fellow at the College, said the government’s new policy decisions have led to many health repercussions for immigrant workers and their families.

“The TPS and DACA repeal has created fear from separation of families and fear of deportation,” Mitchell said. “We need to ensure safe, healthy, equitable, and permanent residence for all those under attack right now.”

The rally, which lasted for about 90 minutes, also brought together people from other campuses in the Boston area. Students from Tufts, UMass Boston, Lesley, MIT, and Northeastern demonstrated to show support for TPS workers.

Carla Morales, a student at UMass Boston and a member of the TPS Committee of Massachusetts, said she came to the rally to stand in solidarity with TPS employees at Harvard.

“I think this rally was a sign of democracy that helps our voices be heard for a cause that is important and for a cause that supports not just TPS workers but all immigrants who are discriminated,” Morales said.

A self-described TPS recipient herself, Morales said she hopes to continue advocating for her rights and the “rights of all immigrants to obtain permanent residency in the [United States].”