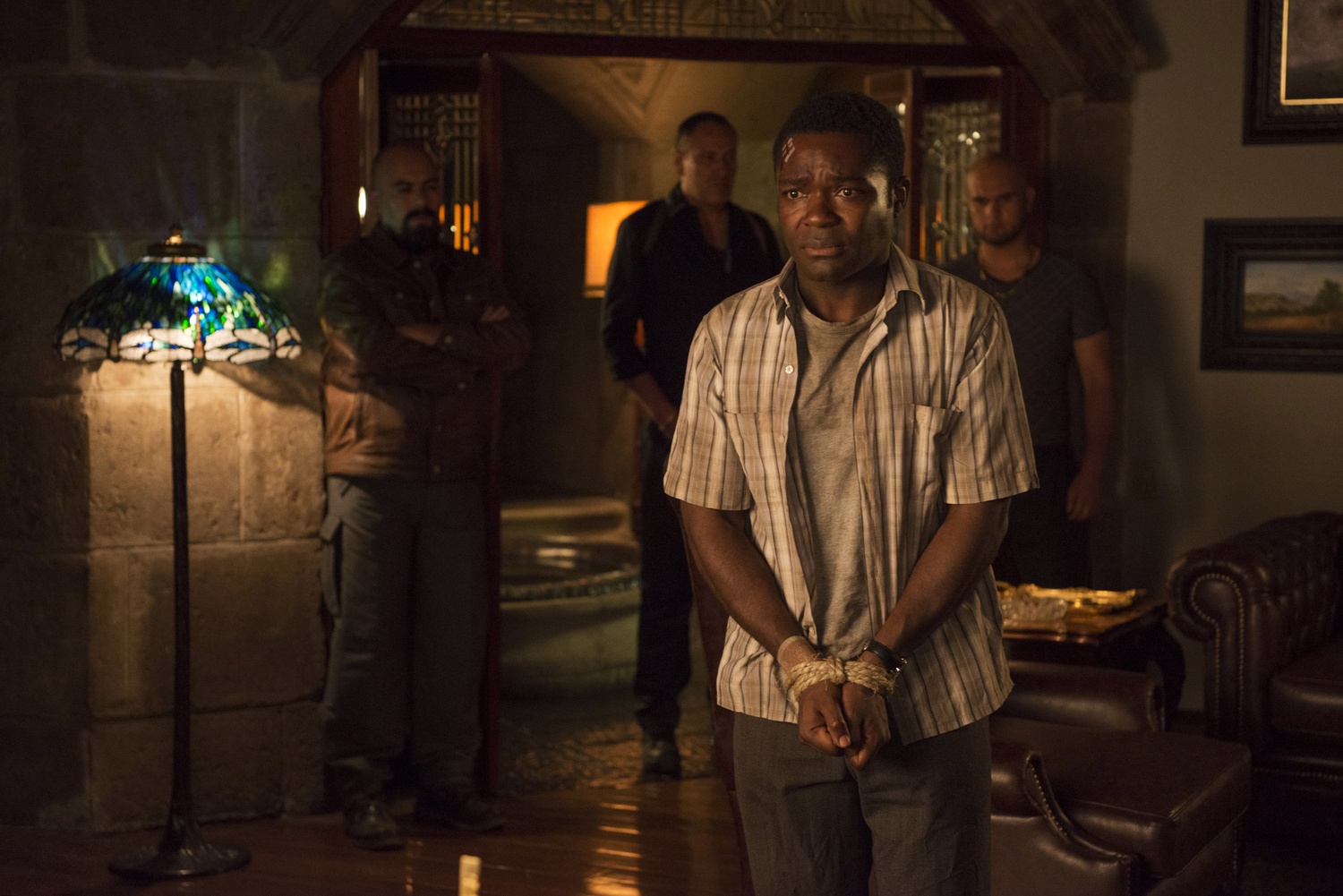 “Gringo” is the Spanish word for foreigner. They’re usually American, white, and easy to spot in a crowd. The word can be used as a pejorative or as a humorous tag for clueless tourists. At any rate, a gringo cannot be expected to understand Hispanic culture, its rules, and its customs. In the case of Harold Soyinka (David Oyelowo), his innocence puts him at a distinct disadvantage compared to his more attuned, cosmopolite associates.

Harold is a gringo in two ways. An immigrant from Nigeria, Harold works for an American pharmaceutical company, assigned to operations in Mexico. He is a friendly man, a hard worker, a supportive husband, and an utterly oblivious victim of his boss’s ruthless corporate machinations. In an attempt to save his own livelihood, Harold finds himself in the thick of a multi-sided intrigue between executives, mob bosses, and cutthroats looking to make a quick buck out of the chaos. Director Nash Edgerton tells a classic underdog story through the murky plot, although Oyelowo himself propels the tale through his charming naïveté. The result is some quick, funny entertainment, though it struggles to convey its overarching meaning.

The film gets most of its laughs by contrasting the professional atmosphere of Harold’s workplace with the realities of his life. An innocent trip to Mexico is also a setup for Harold’s termination, an industrial espionage mission, and a drug war skirmish. Successful, professional executives talk trash, sex, and murder on an hourly basis. Scenes in polished, modern buildings suddenly cut into shots of dingy motels and bars. While Harold’s superiors Richard Rusk (Joel Edgerton) and Elaine Markinson (Charlize Theron) nonchalantly plan mergers, Harold is on the run from drug cartels. The atmosphere throughout the film is flippant and thoroughly irreverent to all parties involved.

At the same time, the people in power, both in the United States and Mexico, are clearly monsters. Both the company and the cartel are lying, backstabbing, cheating scum. People who claim to help Harold end up trying to capture him, and people who are told to kill him end up saving him. The sheer number of plot twists and double-crosses in the film, while certainly uproarious, needlessly complicates the plot. Harold finds out that his “friend” Richard is planning to sell him out of his job, so he fakes his kidnapping to get some insurance money. All goes well until, in a stroke of comedy, Harold finds out that his insurance policy is nonexistent, and he really is kidnapped by a drug cartel. From here on, the movie descends into utter chaos. In his defense, Oyelowo does an admirable job portraying the lighthearted, simple-minded Harold, a role that speaks to his versatility, given his far grittier role as Martin Luther King in “Selma.” Harold’s exaggerated simple-mindedness makes for a refreshing contrast to the absolute snarl of plotlines.

But integrity is not enough to save Harold, as the film makes it quite clear that nice guys finish last. Harold’s greatest enemy is not the executive establishment, nor the criminal network, but his own purity of character. He stumbles over his words, fails to notice a single one of his betrayers, and escapes pursuers by sheer force of plot. He is an outsider, a “no-account official” in the financial world and the “black gringo” in Mexico. Harold recalls his father’s guide to success before he came to America: “You work hard, and you follow the rules.” The USA was meant to be a land of opportunity, where honest, hardworking people can make a living. Instead, the world runs by Rusk’s philosophy of “You want something? You go out there and fucking take it.” Life is inherently unfair.

At this point, the film jumps off the comedy train to take a jab at the corrupt paths to power. Harold tells the story of when he first started working under Rusk. They were playing a friendly chess game, and Harold saw an opening for an easy checkmate. Yet he did not take it. Why? As he says, “You do not beat the boss.” There are countless hidden, arbitrary rules to success, in crime as well as in business. The prominent drug lord in Mexico, nicknamed Black Panther (Carlos Corona), interrogates his visitors with the life-or-death question of “Do you like the Beatles?” Those who answer unsatisfactorily are promptly shot.

To come out on top, Harold is forced to engage in a bit of deception of his own. He may have lost his career, his wife, and his friendships, but in exchange he seizes a chance to start his life fresh. He seeks to disappear, and in the process leads Rusk and his potential captors on a wild-goose chase through the streets of Mexico. But what sets him and his brand of deception apart from the people he seeks vengeance on? The movie seeks to explain this in a rare moment of clarity, when ex-mercenary Mitch (Sharlto Copley) poses an ethical dilemma to Harold: Why is Judas Iscariot, a man who repents and punishes himself for his sins, more reviled than Peter, a man who denies the Christ three times? Harold replies, “Judas was motivated by money, but Peter faced a crisis of the soul.”

Presumably, Harold is different from Rusk or the Black Panther in this morality: He sees his dishonesty as a character flaw, while the others merely see profit. It is this recognition of his own faults that makes Harold a better and ultimately more honest man. Life is not fair, and success will nearly inevitably fall to the undeserving. But according to “Gringo,” even the outsiders can find their place in the world if they play a game with higher stakes than money.