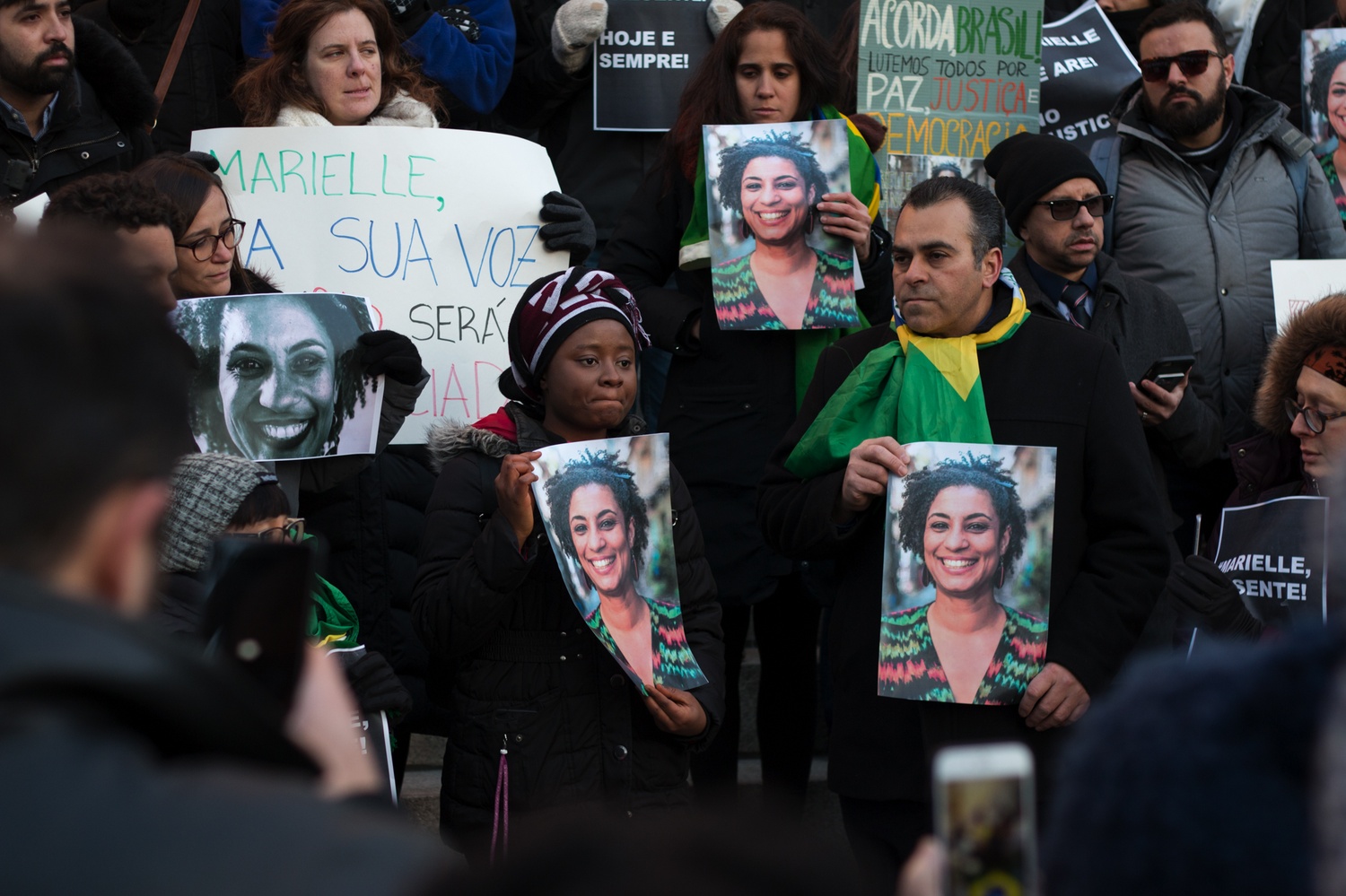 More than one hundred Harvard affiliates and Boston area residents gathered in front of the John Harvard statue Monday to protest the recent assassination of Marielle Franco, a Brazilian human rights activist and city councilor in Rio de Janeiro.

Last Wednesday, Franco was shot with multiple bullets by assailants, who followed the 38-year-old councilor’s movements as she was making her way back home from a meeting about empowering black women, according to the New York Times. Franco’s driver, Anderson Pedro Gomes, was also killed during the incident.

Carolina A.C. San Miguel, a doctoral candidate at the Graduate School of Design, helped organize the Boston protest opposing Franco’s assassination. The protest followed several marches across Brazil that occurred in the wake of Wednesday’s attack.

“We have a group of Brazilian researchers here in Boston, and we started talking online just this weekend. We built a Whatsapp group, wrote a letter together, and decided to organize a gathering,” San Miguel said.

Students from several Harvard graduate schools, as well as MIT, helped organize the event, according to San Miguel.

“This was a very spontaneous process. We realized that all the Brazilians living here were very shocked and wanted to do something,” Abreu said. “We are far from the country, but we still want to have a voice and show our concerns and worries about the situation back home.”

“We were expecting 10 people at the protest,” San Miguel said. “But on Facebook, it seemed like there was a whole bunch of people—like 500 people—interested. For us, it’s not about size. It’s just about people talking and gathering together from all over. This is the city with the biggest community of Brazilians outside of Brazil. So this a very significant and symbolic place. And we have to say what we think.”

San Miguel, Abreu, and other protest organizers took turns reading portions of a letter addressed to Franco they wrote in English and Portuguese. Throughout the reading, protesters collectively chanted “Marielle is here, Anderson is here” in both languages.

“We demand the end of the collective search warrants, the end of military justice jurisdiction over civilians, and for the extinction of the military police for ordinary public safety,” Abreu read from the letter.

Afterwards, protesters gave speeches expressing their grief and visions for justice in light of the assassination. Carlos A. F. Da Silva, a Brazilian-American school committee member in Hingham, Mass., was one of the speakers.

“I never thought I would be here, seeking justice for Brazilians overseas,” DaSilva said. "Over forty elected representatives have been killed over the last two years in Brazil. This is a shame. We must bring this to light.”

Several protesters held signs and wore Brazilian flags, including Anna Borges, a former Portuguese teaching assistant in the Department of Romance Languages and Literatures, who made a sign that translates: “Wake up Brazil! Let us fight for peace, justice, and democracy.”

A few weeks before her death, Franco criticized the police brutality that she said has caused increasing violence and hatred in Rio de Janeiro, according to the New York Times. She argued that a trigger-happy police culture and entrenched inequality are at the root of decades of violence afflicting hundreds of people.

In the last year alone, there were more than 6,700 violent deaths in Rio de Janeiro State, the New York Times reported.

Sussen Gazal, a former Brazilian journalist who currently works in Cambridge, said she was proud of the achievements Franco made during her lifetime.

“We have come here today to not only honor [Marielle’s] death, but to recognize the important impact she had on Brazilians all over the world,” Gazal said. “Everybody is busy with their lives but when you see people coming together like this, it is a reminder that we have to remember our roots and our home countries.”

—Staff writer Sonia Kim can be reached at sonia.kim@thecrimson.com