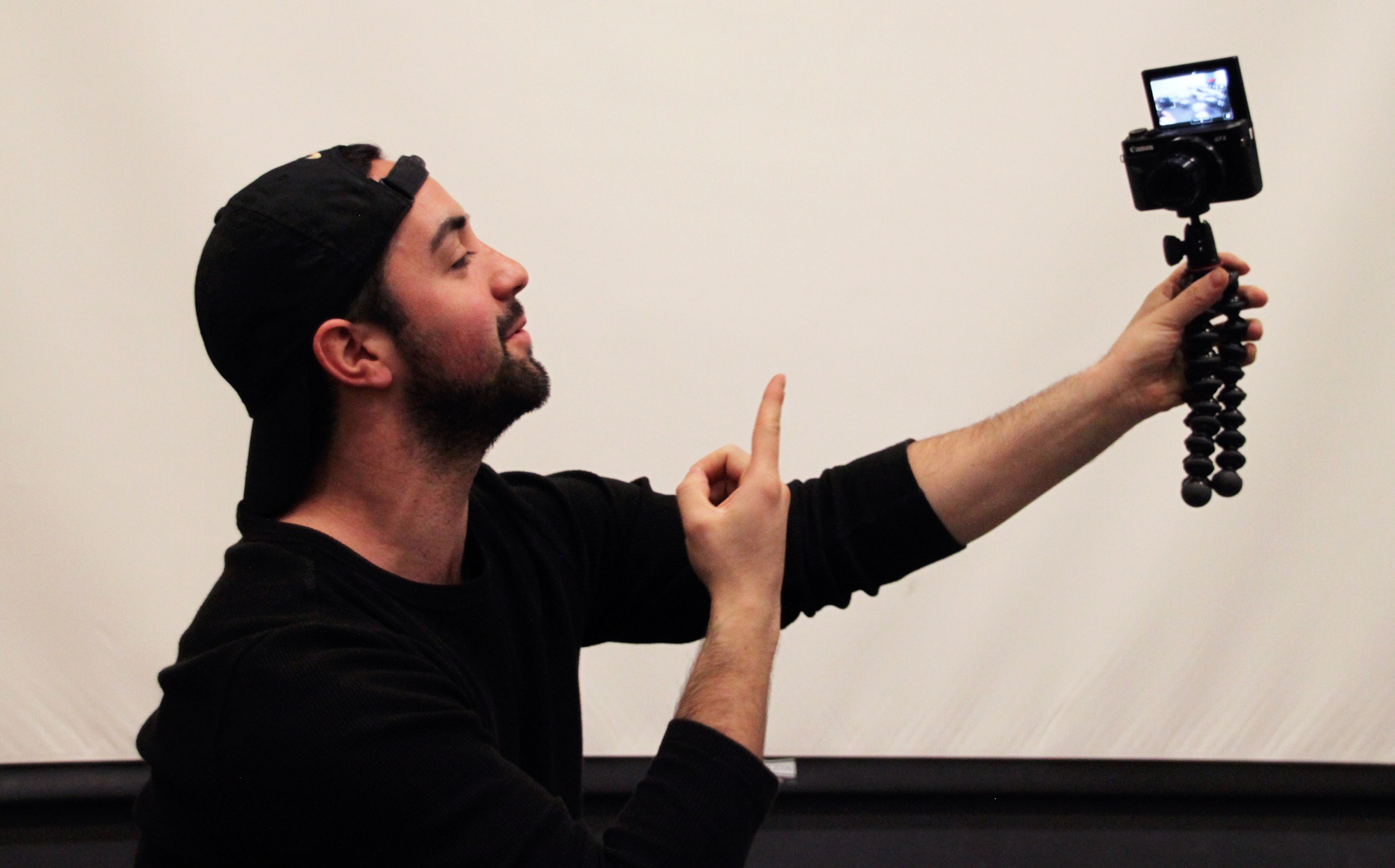 Vlogger Juan Carlos Pena '19 speaks to the viewers about life at Harvard. His channel, changemakers, has over 100 videos.
Advertisement
Advertisement

The vloggers’ videos, class years, and backgrounds may vary, but their viewers do not. Watchers’ comments seem to idolize Harvard with words like “hope,” “dream,” and “wish,” along with countless heart-eyes emojis. The vloggers cater to an audience that requests all Harvard coverage, all the time.
By Vivekae M. Kim and Kate A. Moran

When Juan C. Peña ’19 answered a call from an unknown number, he didn’t expect it to be one of his YouTube commenters. Peña’s channel is called Changemakers, via which he allows viewers to follow “a 20 year old finding his place in the world,” according to his channel description.

He’s not kidding around—viewers can watch daily vlogs where he bangs a notebook filled with brainstormed company names against his head, yells “What the hell, Boston?”, skateboards through the snow, and teaches “HOW TO SOLVE ALL YOUR PROBLEMS - Life Hack” in the span of four minutes and 16 seconds. Peña views his channel as part of his mission to spread positivity, as well as a journal of his own entrepreneurial and personal endeavors. "That's the vibe I want to put out into the world, and if someone can pick up on that positive vibe then maybe they'll feel the same way," Peña says.

He never expected these efforts to reach past the digital and turn into a real, live voice on the line. The unexpected caller found Peña’s personal website, clicked on his resume, and dialed up his number, introducing himself as a commenter who wanted to follow up on a college admissions inquiry. “I don't mind it at all because if he wants to be at a point I was blessed enough to be [at], I'm like, ‘Hey, that's great,’" Peña says of the call.

He’s not alone: Harvard’s student vloggers find themselves in the unique position of attending the College and maintaining an online platform. These undergraduates share both their own academic and personal experiences with viewers, knowing many of those who watch their videos are prospective students looking for insider information.

The vloggers’ videos, class years, and backgrounds may vary, but their viewers do not. Watchers’ comments seem to idolize Harvard with words like “hope,” “dream,” and “wish,” along with countless heart-eyes emojis. The vloggers cater to an audience that requests all Harvard coverage, all the time.

And the vloggers really bring the goods. TheDanLife (Daniel M. Ayane ’19) has a channel advertising videos that claim to provide a look at the Harvard Experience, with titles like “A Typical Day in the Life of a Harvard Freshman Student” reaching up to 74,000 views.

Ayane’s channel also offers dorm tours, question-and-answer sessions with students, and college admissions advice. Inspired by University of Cambridge vlogger Jake Wright, Ayane initially created his channel as a tool to show off daily university life, similar to those he found helpful during his own application process. He felt there was a steep learning curve for international students applying to Ivy League schools—one he wanted to reduce, as an international student from England himself.

He was taken aback by how many students thanked him for his instructional videos on applying to Harvard. “The common person in America,” he says, “knows the Common App, FAFSA. But for a guy in Sweden, it’s like, ‘Who’s FAFSA?’”

Ayane believes there is a myth surrounding the Harvard student that he tries to dispel. "They think it's a bunch of really rich kids, [boasting] about how rich they are, little do they know it's actually me... playing football, playing FIFA."

In contrast to the DSLRs and tripods of other YouTubers, Ayane often films on his phone, preferring its “authenticity,” citing his “aesthetic” as “crappy quality videos.” He clarifies: “Not a crappy guy... [it’s] just more authentic to keep it my style."

Other Harvard vloggers treat their videos as curated, cinematic experiences. John A. Fish ’21 develops his video topics for two to three weeks, scripts them, and storyboards them all before he even starts filming, which can take another six to eight hours. His videos occupy a middle ground between the relentless positivity of Peña’s motivational slogans and the frank, to-the-point advice of Ayane’s uploads.

Fish claims to promote self-improvement and personal growth: He encourages people “to be realistic and passionate about something and just be the best version of themselves that they can be.” Some videos tout thought-provoking titles like “MY GROWTH MINDSET.” Videos like these earn 4,000 views, paling in comparison to the 161,000 views videos with titles like “HOW I GOT INTO HARVARD” earn. The student vloggers say there is sometimes a discrepancy between the types of content vloggers want to make and the type of content their target audience wants to see.

“70 percent of my viewers are under 25,” Fish says. The clearly defined target audience renders Harvard’s vloggers attractive to tutoring companies. Ayane, for example, has been approached by several educational startups eager to take advantage of the Harvard hopefuls who watch his videos, but he has turned them down.

Fellow YouTuber and current alumna, Taylor M. Reneau ’16, is perhaps the most influential of the group, boasting over 100,000 subscribers. While her earlier videos offered her perspective on topics ranging from Harvard social life to study tips, she has shifted after graduation to producing videos that keep Harvard in the periphery. Reneau acknowledges this change, comparing herself to a Disney Channel star trying to break out of her childhood shell. She jokes: "I’m more than just a Harvard student trying to talk about school, so I draw people in with academics and keep people for the cool personality.”

Fish claims the Harvard name “for sure” helps with his view count, but tries to keep his channel from becoming too Harvard-centric, believing he can’t teach people to “game” the college admissions system. Nonetheless, that seems to be exactly what people want.

Peña is currently in correspondence with several subscribers via email who are seeking college admissions advice, so he witnesses the stress of prospective students firsthand. “When I don’t reply within 24 hours, a lot of them send me five emails at a time, just like, ‘Hey, are you there, are you there,’ and I get it.” He remembers when he applied to college and says he “can definitely see [himself] wanting get a step up, whatever step up you can get.”

Peña isn’t the only Harvard YouTuber who receives admissions questions. Commenters list their extracurriculars for Ayane, asking whether they’re “‘good enough to get into Harvard.’” In response, Ayane says “I'm like, 'Yeah, just keep what you're doing man, I have no idea.'

We all got in here and we have no bloody idea how.”

Harvard’s vloggers don’t claim to have all the answers. But their videos keep thousands watching, just in case they do.