‘Obsidio:’ An Eclectic End to the Illuminae Files 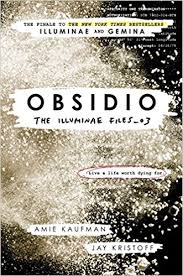 “On a little speck of ice at the...end of the universe known as Kerenza IV…” an illegal mining colony is struggling to survive an invasion. “Obsidio” is the third book in the Illuminae Files trilogy by Amie Kaufman and Jay Kristoff. It has the daunting task of explaining how thousands of people who have been cut off from the rest of the universe overcome their attackers. What’s more, the entirety of the trilogy is comprised of files in the form of emails, online chats, transcripts of videos, handwritten notes and drawings. This format undoubtedly makes the trilogy unique, allowing “Obsidio” to overcome some recurring issues.

The files allow for a lot of information to be transmitted. The various fonts, drawings, cartoons, and graphics are a break from the usual paragraphs found in any novel. “Obsidio” often utilizes maps and images of space in action scenes, interweaving the text into streets or the flight paths of spaceships. These action sequences lean on the placement of the text rather than the text itself to convey the excitement and tension of conflict. This can quickly feel overused, but Kaufman and Kristoff make sure to employ this tactic in moderation. Overall, the file format does the novel justice by compiling information in intriguing and humorous ways.

However, there are certain aspects of the novel that Kaufman and Kristoff, unfortunately, do not use sparingly. An early file comes with the note, “be warned: curse words incoming.” But the warning seems unnecessary, since all swearing is censored by a black block. At first, the freedom to decide what curse word fills the space is entertaining[,] but the omissions quickly begin to disrupt the flow of the text. Similarly, the misspellings and text lingo within online chats—while realistic—are tiring. “u dun need me 2 do anything else?” is answered with, “no, ur space ninja duties r concluded 4 the day.” Although the syntax is familiar, it is tiring to read in bulk. The censorship and text lingo are parts of “Obsidio” that would benefit from less frequent use.

The lingo and drawings may make “Obsidio” appear juvenile, but the underlying themes are mature and complex. The narrative asks if the needs of the many outweigh the needs of the few, as the artificial intelligence aboard the space ships make drastic and often inhumane decisions. The debates invoke the consequences and benefits of utilitarianism, without explicitly naming them. The situation aboard the spaceship Mao—there is not enough oxygen for everyone—is similar to the popular trolley problem: A train rolls down a track towards four people, but a lever could reroute the train to a different track with only one person on it. At its core, “Obsidio” deals with philosophical questions about the value of an individual human life.

The most interesting character within the series is not a human at all, but rather an AI called AIDAN. AIDAN is seemingly all-powerful but devolves into many people’s worst nightmare: It develops feelings. However, AIDAN is not human with a full range of emotional understanding. It recognizes that “I AM NOT GOOD. NOR AM I EVIL. I AM NO HERO. NOR AM I VILLAIN” in its distinctive capitalized narrative. AIDAN’s struggle with feelings makes it a complex character, and also poses a question for what the future of technology holds.

“Obsidio” is many things: It is a book with an unusual format that on many occasions disregards normal syntax, yet it manages to ask philosophical questions that have plagued the human race for years while pondering the future of AI technology.