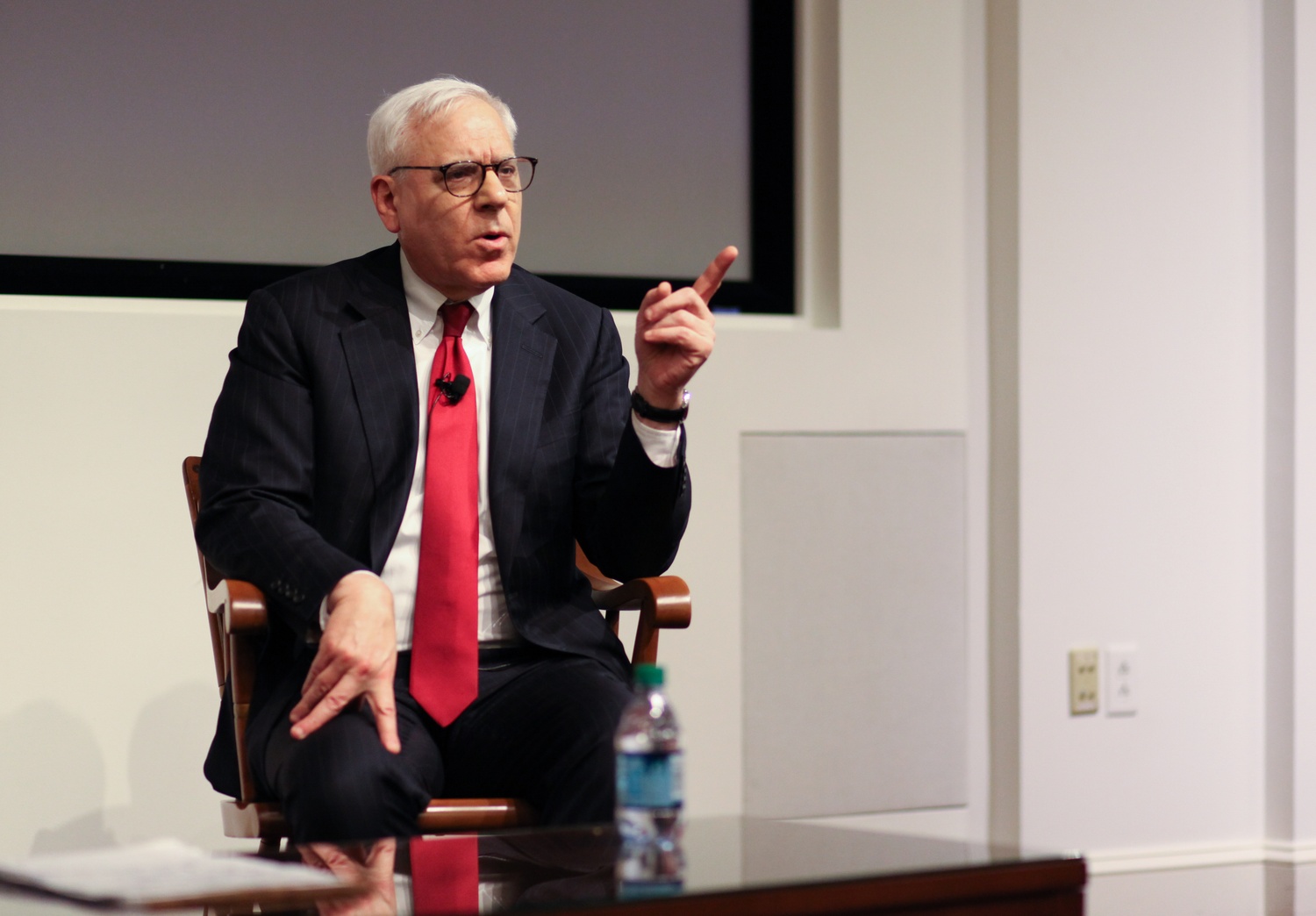 David M. Rubenstein, a member of the Harvard Corporation, discussed his non-linear path to private equity, outlined his philanthropic vision, and ruminated on past failures at a Harvard Business School event Monday.

The Corporation is the University’s highest governing body; Rubenstein, the newest member of 13-person board, was appointed to the body in 2017. The 68-year-old co-founder of Carlyle Group—a D.C. based private equity group—is worth more than $2.6 billion and is known for his philanthropy. He also advises multiple prominent nonprofit and educational institutions, including chairing the board of trustees of the Kennedy Center and the Brookings Institution.

The Business School event was co-hosted by the Venture Capital and Private Equity Club, an HBS student group, and by the Conversations at Harvard series, which celebrated its 15th anniversary Monday. More than 100 people attended the informal town hall-style conversation.

Rubenstein began his remarks by asking the audience if they were surprised when they were accepted to Harvard. Rubenstein then said that he—unlike the audience, comprising mostly Business School students—would likely never receive a Harvard degree.

“I’m probably the only person here who will not get a Harvard degree,” he said. “I do enjoy what Harvard represents, which is the epitome of what the human brain can achieve when you have great scholars and great students coming together.”

Peter V. Emerson, the founder of Conversations at Harvard, explained he started the series—a program that invites prominent figures in various fields to Harvard’s campus—to encourage conversations in lieu of prepared speeches.

Before Rubenstein spoke to the audience, co-president of the Venture Capital and Private Equity club Jessie Cai explained the significance of the billionaire’s work across the past few decades.

“His efforts are wide-ranging, extending from arts, culture, health care, education. He’s even pioneered a new form of giving, called patriotic philanthropy, which is defined as giving back to our nation,” Cai said.

Rubenstein has practiced this form of philanthropy since at least 2007, when he purchased a copy of the Magna Carta and donated it to the National Archives. In Dec. 2011, Rubenstein donated $4.5 million to the National Zoo to support a giant panda reproduction program. In 2012, Rubenstein donated $7.5 million towards repairing the Washington Monument after an earthquake damaged the obelisk.

Most recently, in February, Rubenstein bought a rare copy of the Declaration of Independence—one of 51 known editions—for a price that numbered in “seven figures,” as he told the Washington Post.

Building on this theme, Rubenstein highlighted the role reading plays in creating citizens who actively participate in society.

“Thirty percent of all people who graduate from college never read another book in their entire life,” he said. “I am very worried about people not being able to read, because if you can’t read then you can’t be that effective.”

Rubenstein also discussed many of his personal failures. In one anecdote, Rubenstein described how he almost lost a scholarship offer at the University of Chicago Law School because he did not send in a $50 fee on time.

“I failed at many things and the failure has made me feel I should give back for the good luck,” said Rubenstein, who donated $10 million to the University of Chicago Law School in 2010.

Rubenstein noted that, even though members of the audience might boast one or more Harvard degrees, every single attendee will likely have to face failure.

In addition to accepting failure, Rubenstein advised students to prioritize their interests over what they believe might stand out on a resume.

“I would find one cause with which you can engage, and find one thing you’re passionate about,” he said. “If you can’t find it now, you’ll find it eventually. I think the mistake that I made is that I wasn’t as focused on the things that I’m focused on now, and I’m rushing to give back to society.”

Rubenstein recently served on Harvard’s presidential search committee, which comprised 12 members of the Corporation and three members from the Board of Overseers. The committee began searching for the successor to University President Drew G. Faust in summer 2017. On Feb. 11, the group announced it had selected Lawrence S. Bacow—who also served on the committee before stepping down midway through the search—to serve as Harvard’s 29th president.