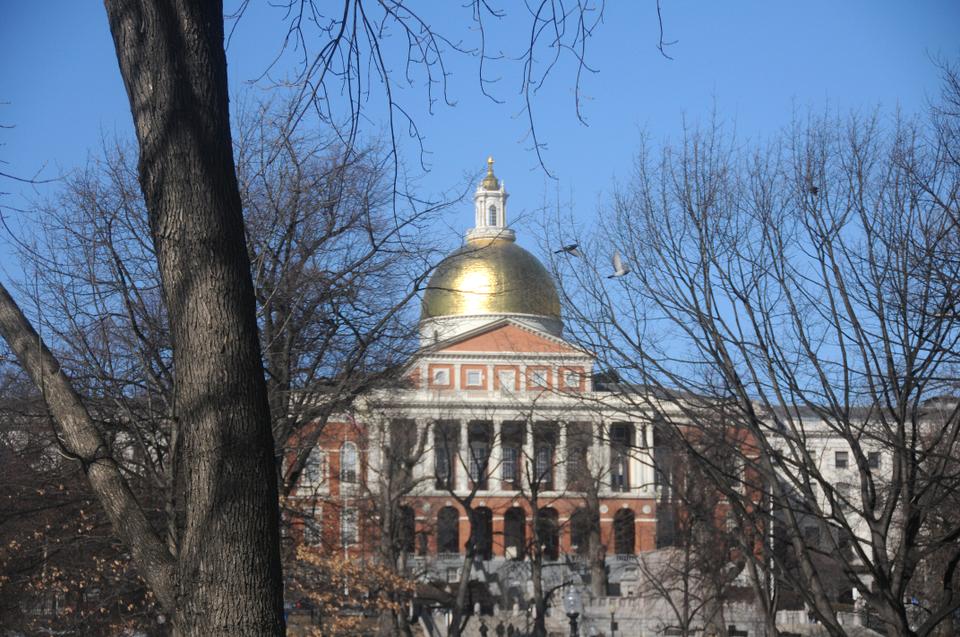 Joining a few hundred demonstrators with signs reading “1 in 5. Is that my future?” and “No means no,” a handful of Harvard students braved the April cold on Tuesday to join the Student Rally Against Sexual Violence at the Massachusetts State House in Boston.

Citing Bureau of Labor Statistics that up to 90 percent of sexual assaults go unreported, proponents argue that the climate survey bill would provide accurate information to evaluate the prevalence of sexual assault in higher education.

“The first step to solving any problem is understanding it,” said Rep. Lori A. Ehrlich, the lead sponsor of H.4159. “And the way it is right now, we lack hard data and statistics that are needed to measure the depth and breadth of sexual harassment and violence at colleges and universities.”

Ehrlich said she worked closely with John B. Gabrieli '16 to develop the bill—and with Harvard Kennedy School students Catherine M. “Cici” Coquillette and Elyse N. Voegeli to garner support for it. Coquillette and Voegeli wrote a “fact sheet” advising legislators on best practices based on data collected from colleges and universities in Massachusetts that have already implemented such surveys.

While Harvard implemented a sexual assault climate survey in 2015, Voegeli said H.4159 would ensure that every school in Massachusetts has to participate in such a survey and would collect comparable data from different schools. The task force to create the climate survey would include state officials, college students, and representatives of rape crisis centers.

Coquillette said the cost of developing a climate survey is often a barrier for implementation. She said the state would provide the new survey to Massachusetts colleges and universities free of charge.

H.632, and its sister bill in the Massachusetts Senate, S.706, would strengthen Obama-era sexual assault reporting and response requirements, mandating annual awareness and prevention training, the publication of policies and resources for sexual violence data online, and equal rights, notices, and representation for both the reporting and responding parties.

“When it comes to sexual assault, we want to ensure, to mandate, that there will be training for all students, staff, and faculty, around sexual assault—that everyone will be aware of their rights and what the procedures are,” said Rep. Tricia Farley-Bouvier, the lead sponsor of the bill. “There are rights for the victims, and for the responders. Everybody's rights need to be protected.”

The Every Voice Coalition, co-founded by Gabrieli, was the primary organizer of the rally. The group is comprised of students, those who have experienced sexual assault, and experts who advocate a campus climate survey as the first step towards improved campus safety.

Gabrieli said he was particularly moved by witnessing survivors and advocates “reclaim the narrative.”

“I mean today was incredible because students actually got to sit face to face with legislators. We had 40 meetings today with legislators in addition to our rally itself. There were meetings where survivors were telling a legislator to their face, ‘This is my story. This is why this matters to me. This is why we have to act.’”

Representatives from both the Harvard College Democrats and the Harvard Republican Club said the bills are urgently needed on college campuses.

“Sexual assault and harassment has become an epidemic on higher education campuses, and not doing something is unacceptable at this point,” said Kiera E. O’Brien ’20, president of the Harvard Republican Club.

Isabel A. Giovannetti ’21, communications director of the Harvard College Democrats, said that by working together, the Democrats and Republicans are sending a message that the bills should be non-partisan.

“This issue is not a partisan issue in any way. And I think emphasizing that by showing that both the College Democrats and the College Republicans are in support of these bills is really powerful,” Giovannetti said. “There’s no left or right side to preventing sexual violence.”

In the fight against sexual violence on college campuses, Rep. Farley-Bouvier said students can play an important role.

“It cannot be overstated how important student voices are in this conversation. The more students that are speaking out, the better it is for the passage of this bill,” she said.